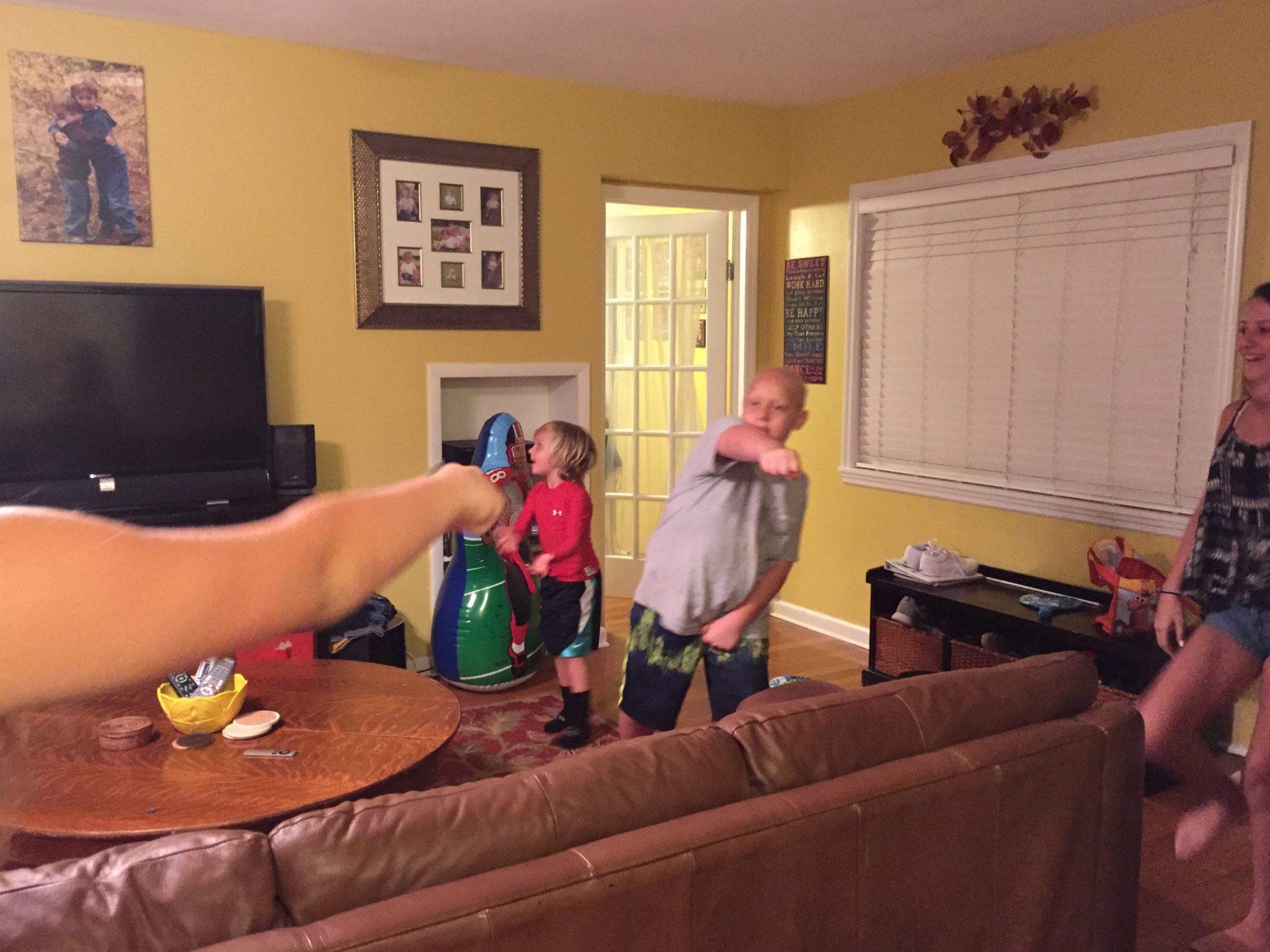 Banyan downloaded a new audiobook–Tales of a Fourth Grade Nothing–to keep Benji entertained on the drive over the Skyway this morning. It is read by Judy Blume herself, so it’s really quite good. I’m glad Banyan joined us today. It’s the last weekday before the new school year, and probably one of the last times he’ll get to accompany his brother to the Outpatient Care Clinic.

We took Tracey’s advice and waited until we arrived to put numbing cream on Benji’s legs. I’m grateful we did. The Infusion Center was packed today, with many quickly moving nurses and several patients going in and out of treatment rooms. We heard a LOT of crying. I gave thanks once again for Benji’s unbelievable bravery and stamina.

It was an hour and a half before Benji even got his blood drawn today. Tracey made him as comfortable as possible, waiting patiently for him to use his oils, and flushing his port and locking it with heparin all at once. This way, if he didn’t need a transfusion, he could be deaccessed after his hour of monitoring without further flushes. We waited a little while for the labs to come back. I had been prepared for the possibility of a platelet transfusion, but his platelets actually increased today, to 99,000. His hemoglobin stayed the same, and his absolute neutrophil count (ANC) dropped to a “profoundly neutropenic” 139.

These numbers could mean that the nadir period from the eight doses of Cytarabine Benji received at the beginning of this phase is coming to a close. His ANC will take a little longer to catch up. In February, with numbers this low, we kept Benji away from crowds at all costs. We wound up in the hospital anyway. In contrast, he went to two school open houses yesterday. This was a risk, but we are trying to strike a balance between putting him in a bubble and allowing him to live as normal a life as possible. A cold would not hurt him, it would just inconvenience our family with a hospital stay. Bacteria is the real enemy, and we are ever mindful of that.

With his numbers back from the lab, Benji’s nurses were given the go-ahead to administer his Erwinia shots. Benji’s Jedi mind tricks worked, but his eyes widened again, just like Wednesday. I could see he was experiencing major pain. I asked him to tell me about it; this time, it was only in one leg–his left–but it burned more than usual. We got him up to walk his laps quickly, and we took a couple of extra loops. It really helps.

While we waited the hour after the shots, I read a beautiful article by Tampa Bay Rays pitcher Chris Archer, who happens to be Benji’s favorite baseball player (with Evan Longoria a very close second). In the article, Chris writes:

“When I go to the Children’s Hospital, I feel like I get more out of it than the kids do. They’re the ones with the real stories. They’re so uplifting and inspiring. When I visit a five-year-old child with cancer, I’m sure they appreciate that I take the time to stop by, and it’s good for them to know that people care about them and support them in their fight. But to see how they’re living and the obstacles they have to face every day, and that they can smile through it all, makes it pretty easy for me to put the minuscule problems I face into perspective and get through whatever I have going on. Every time I go, it’s a reality check. It’s easy to forget how grateful we should be for the blessings we have. I just hope I’m able to impact them the way they impact me. I like to think I do.”

I took a chance and sent Chris a message, requesting a heads up next time he plans a trip to All Children’s. I repeated the message on all of the social media platforms I use. I would love for Benji to be able to meet him. I think it’s totally within the realm of possibility.

We waited the hour for monitoring, then Benjamin was finally deaccessed. Removing the needle hurt him more this time than it has before, but it was a quick patch of discomfort. He was so relieved to be free of the tape, the needle, the pulling sensation, that incessant clicking sound.

When we came home, we got a huge surprise. Benji’s cousin Lotus, who has had dreadlocks for several years now, cut his hair super short in honor of Benjamin’s journey. He looks so grown up now. Benjamin was very touched, and beamed when he saw the pictures.

The last weekend of summer is upon us. The kids in the neighborhood conspired to have a little party tonight with pizza, snacks, movies and dancing. I reminded Benji to wash his hands often and made sure no one had been sick recently. But I gave him my blessing to have fun with his friends. There is something to be said for just being happy. I like to believe it’s working to make him be healthy, too.