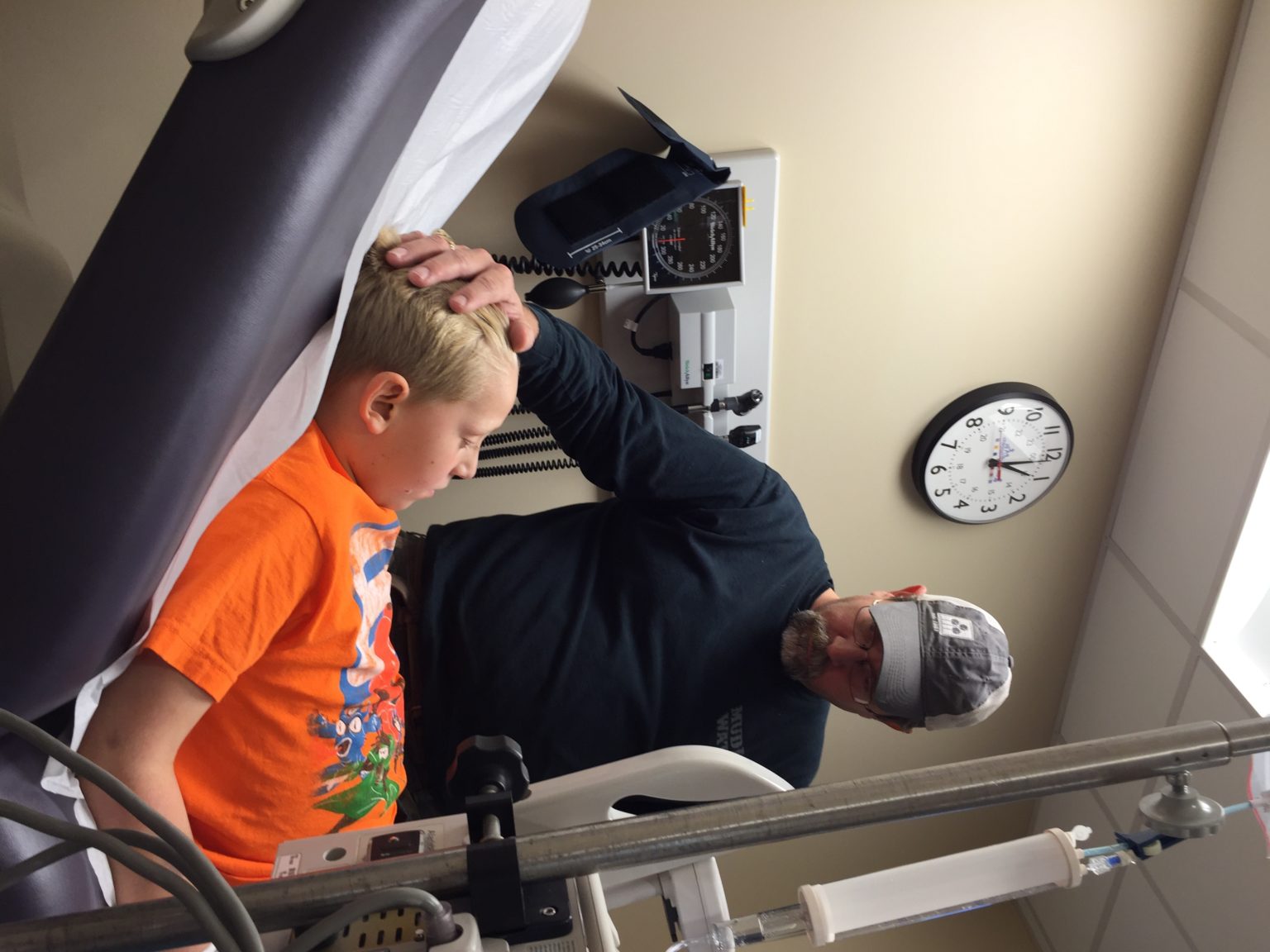 Benjamin is “a Friday guy.” This is the label that stuck with us early on, given to him by one of the nurses instructing us on our road map of treatment. Fridays are the days he’ll be getting chemotherapy throughout the Induction Phase. His first dose was on the 2nd of January. Today was his sixth. The steroid he takes twice daily makes the chemotherapy medicine work overtime in between doses.

So, we have another blessing to count: this means, at least during this phase, that the yuckiest days after chemo will fall on the weekends, when we are all home together. So far, his chemo has all been inpatient, and with everything else going on in the hospital, it was tricky to determine exactly what caused which side effects, and when.

Today our Friday guy was scheduled for his first outpatient dose of vincristine. After all big brother Banyan has gone through, including yesterday’s crazy bomb threat at school, we decided to give him the day off and take him to Benji’s treatment with us. We figure he’s getting some pretty invaluable lessons in biology, cytology, oncology, hematology, pharmacology, and, most importantly, empathy. He can make up his math test next week. His teacher, just like Benji’s, has been so extremely supportive.

Upon arrival at All Children’s, the first order of business for Benjamin (once the salt and vinegar chips were taken care of) was to allow the nurses access to his port. This was the moment he’d been most fearing. He still had some residual trauma from the rough and very NON-empathetic surgical tech on Day 2, even though every nurse since has been skilled and gentle. Compound that with a large and slow healing bruise around the port site, plus what must be the totally bizarre feeling of hard plastic under his skin–even though we’d used the numbing cream, he wasn’t looking forward to having that area poked and prodded.

Once again, Benjamin the Brave showed us his true colors. When the nurses have to access the port, anyone within breathing range of it wears a mask. This includes the patient. All we could see were Benji’s eyes above the white paper covering his nose and mouth. With Michael holding one hand and me the other, the nurse carefully explained what she was doing, and counted to three. His eyes were wide and scared, but brave and ready. No complaint or protest. He didn’t enjoy the experience by any means, but he saw it through, and it didn’t hurt him. He conquered his fear.

Before we could be cleared for the vincristine, Benji had to have another CBC (complete blood count). We were elated when the numbers came back. His platelets were at 64,000! This is still low for a healthy body, but the big jump from Tuesday to today indicates that for the first time since diagnosis, his marrow is able to make platelets on its own, without being dominated by leukemia cells. We know this number can dip again but we chose to take it as a very good sign. His ANC had also increased to 750. High fives all around.

After a brief consultation with Dr. Oshrine, we were cleared for chemo, and waited. And waited. And waited. I’m glad we brought Banyan. We played UNO and the kids played video games to pass the time, and to take Benji’s mind off of his ever increasing hunger (the snacks in his lunchbox had long since vanished). Finally, at nearly 1pm, the nurse came in with the innocuous looking liquid, and geared up in her haz-mat scrubs. Once she administered the drip, the entire process took all of ten minutes. I don’t know if I’ll ever get used to watching that stuff course through his veins.

Only after the drip line tape was removed, his port was de-accessed and bandaged, and the nurse had left the room did Benji fight a few tears. It was like he’d been holding his breath, and finally allowed himself to exhale. It’s all so much for anyone to handle. He’s doing it beautifully.

We returned to the Mexican restaurant we’d found after our first clinic visit. Benji couldn’t get his tacos quickly enough. While we ate, Michael snuck over to the Clusia hedge in the courtyard, and, for the second time, carved “Benji the Brave” and the date into one of its leathery leaves. He’s so proud of our boy.