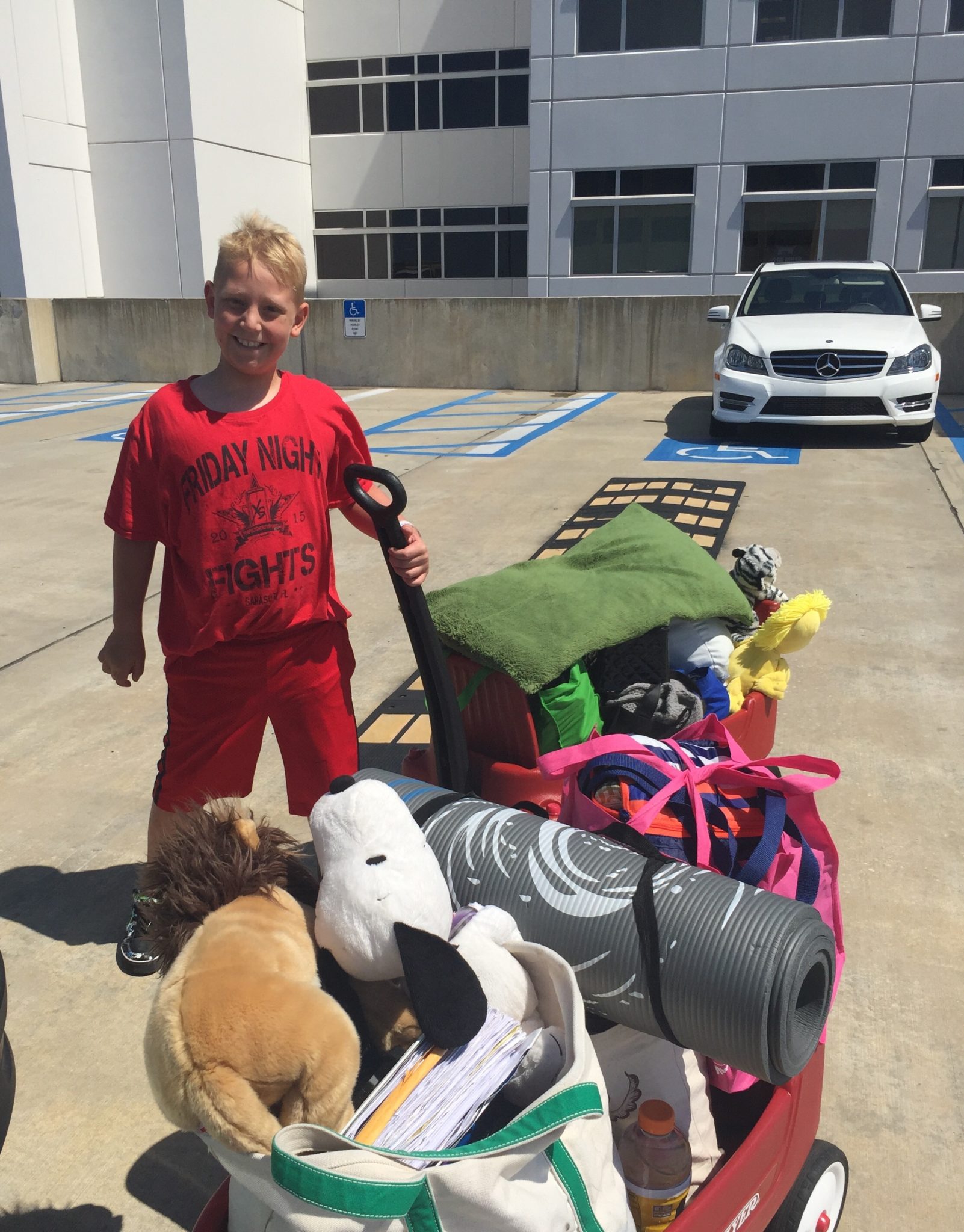 The last time Benjamin was admitted into the hospital, he had a lumbar puncture with intrathecal Methotrexate before the high octane stuff was hung from his IV pole. Today, he was only scheduled for intravenous medicine, so we did not need to restrict food or drink. In fact, we’ve been extremely lenient with both, knowing that this week will bring a low appetite (at best). So Benjamin started his day by joining Michael at his Monday morning breakfast meeting, while I got Banyan ready for his week and loaded up my car. I dropped Banyan off at school, and Michael dropped Benjamin off with me so that he could go to work for a few hours before joining us later in the day. Benji continued his excellent hydration with a Gatorade, I grabbed my coffee, and we headed north toward the Skyway.

We checked into the outpatient clinic first, just to be sure that Benjamin made counts for today’s chemotherapy. His absolute neutrophil count (ANC) did go down considerably, but was well above the mark needed to proceed. While we were waiting for a room on the seventh floor, Benjamin and I went back out to my car with two empty hospital wagons. This was not the original plan; Michael was going to empty my trunk when he arrived, but Benjamin insisted. He was so proud to pull his wagon and show his strength. He seemed so happy, not nervous at all about being admitted. Our room wasn’t ready yet, so we went back to the outpatient clinic, where they began intravenous hydration and preparation for the high dose Methotrexate. They sent us to a smaller exam room we have only been in once before. That’s where we were when Michael arrived.

The one other time we were to taken into Exam Room #3 was to meet with Dr. Oshrine after receiving the results of Benjamin’s Day 29 bone marrow aspirate. That day felt so far in the past. I remember how scared I was, and how reassured we were when we left that we were on the right path. I was comforted by the memory. We are still on the path, right where we need to be.

Our room on the seventh floor this time has a waterfront view and a bathtub. These are excellent features. We unpacked, settled in, and Benjamin knocked out his last math test of the school year while his hydration continued. The fluid was set to drip over three hours before his urine would be tested for the right specific gravity and pH level.

When Benjamin cleared both benchmarks, the nurses gave him a preventative dose of Kytril and ordered the Vincristine and Methotrexate from the pharmacy. We put the Scopolomine patch behind his ear last night before bed. He has Marinol available to him on an as needed basis. I’m hoping this is the winning combination.

We went to the playroom while we waited for the chemotherapy to arrive. Michael and Benji played a heated game of air hockey, and I wonder if the whole floor heard Benjamin’s laughter. It filled the room and filled my heart. We went back to our room with the waterfront view. The medicines were ready.

First on Benjamin’s docket was Vincristine, which dripped over 10 minutes. Then he received a Methotrexate bolus, which is a high volume jumpstart of the medicine; that dripped for half an hour before a lower dose flowed neon through his veins, and will continue through tomorrow evening.

Shortly after the medicine started dripping, Benjamin needed to use the bathroom. I unplugged his IV pole and wheeled it behind him. He noticed that his urine was bright, and looked at the color of the bag. That’s when a moment of nervousness came. He said, “I know it’s the medicine making my pee look like that, that’s what it looked like when I threw up too!” He takes so many different medicines, and rolls with everything so beautifully, that I think only in that bathroom did he correlate the Methotrexate specifically with the nausea.

Still, Benjamin felt hungry later. He requested Mexican food when Michael’s mother and sister offered to pick up dinner. He snacked before they arrived. I told him not to eat too much, because he had a burrito coming. He said “Yeah, but I may not even eat it anyway,” nodding with a knowing look toward the medicine dripping from the bag. My heart sank. Michael and I reminded him that we learned a lot about his body last time and that we were prepared with different medicines this time. It doesn’t have to be the same. Right?

He ate the burrito after all, and enjoyed a nice visit with his family. So far, the only effects of the medicine are bloodshot eyes and a funky taste in his mouth when he drinks water. He’ll continue to get Kytril around the clock. He fell asleep quickly and easily in my arms after our family left. Tomorrow morning will be very telling. I don’t have expectations, but I sure have hopes for peace in Benjamin’s body.

I realize I’ve created rituals here on the seventh floor. Hanging the rainbow maker. Setting up our alter. Heating up water for tea just before Benjamin falls asleep. They provide comfort for me. I hope I have found the right measures of comfort for my boy.