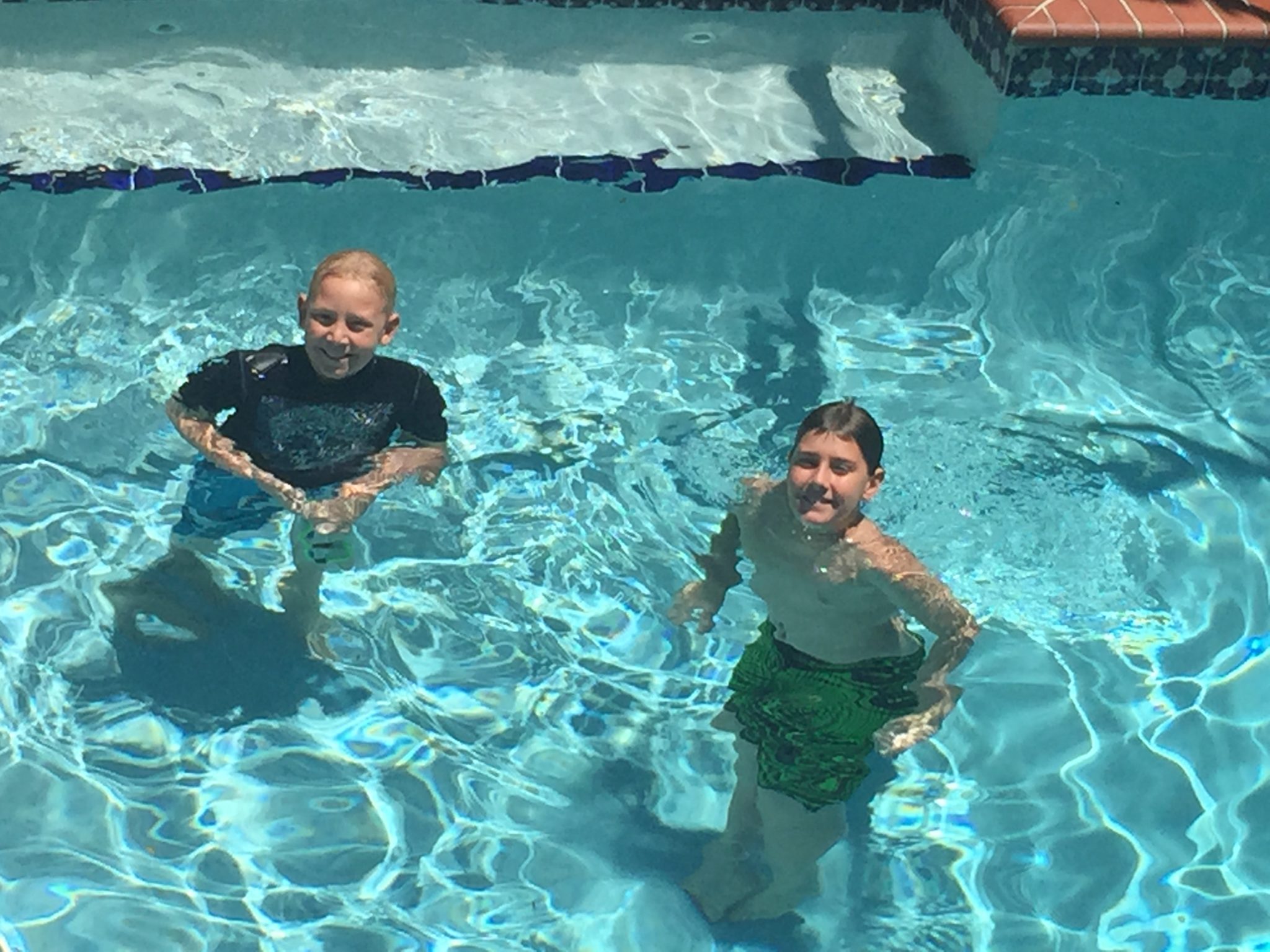 Benjamin begins Interim Maintenance tomorrow. Today was a day of preparation, and of enjoying the comforts of home and family before our first of four hospital stays over the next two months.

I slept so soundly again last night. I’ll miss my bed, but I’ll sleep well on the seventh floor knowing Benjamin’s treatment is progressing. This will be the longest he’s gone without chemotherapy since his diagnosis, and we are ready to move forward.

We enjoyed a fabulous, nourishing, Southern family meal at Michael’s mother’s and sister’s house. Benjamin had a very low grade fever, but we weren’t too concerned. At this point it would have to be a very serious situation for us to deviate from our plan to go to clinic tomorrow and be admitted thereafter. The boys stayed for a while to swim, watch a movie, and then for a visit their great grandmother. This allowed us some much needed time; Michael worked on a deadline and I took my research to Whole Foods.

I spent the rest of the afternoon preparing. I washed our hospital bag, and will repack it before bed. I pre-portioned our homemade mouthwash, and loaded the herbs and aminos we’ve chosen to help detoxify Benjamin’s organs and soothe his mucous lining. I loaded up the schoolwork, the games, the favorite pillows, the coffee mugs, the espresso machine, the rainbow maker. We have what we need to make Benjamin (and me) comfortable through the next few days. (I also packed several lunches for Banyan, realizing that it is just as easy to pack a week’s worth of lunches as it is to pack one. It only took me six years of elementary school parenting to figure that out.)

I worked quickly so that I could justify leaving for an hour to catch the sunset and the full moon rise over the Ringling Bridge. The music sounded perfect through my earbuds, and I ran almost halfway. I was rewarded by a stunning skyline. Everything was so beautiful that I caught myself trying to sabotage my own enjoyment. What if Benjamin reacts poorly to the new combination of medicines? Have I done enough research? What if he loses his resolve after the big celebration over his remission? I quickly released these thoughts. They were not based in reality, but in fear. I acknowledged them for what they were, then threw them right over the railing and into the Intercoastal Waterway.

Benjamin will indeed be getting a whopping day of chemotherapy tomorrow. We will begin the day in the outpatient clinic to make sure he makes counts, or shows an absolute neutrophil count (ANC) of at least 750. It’s almost a guarantee after Friday’s reading of 690. Then he’ll have his port accessed, and we’ll head down to to the Special Procedures Unit for a lumbar puncture with Introthecal Methotrexate. Once he’s in recovery, we will start heavily hydrating him as we move into our temporary home on the seventh floor of All Children’s Hospital. There he’ll get Methotrexate again, in a much higher dose, intravenously. At some point tomorrow, he’ll also get intravenous Vincristine, and get his first dose of 56 days on 6MP, an oral chemotherapy.

A medicine called Leucovorin will follow the high dose Methotrexate, “rescuing” Benjamin’s body–specifically his kidneys–from the toxicity of the chemotherapy. We can’t leave until his liver and kidney numbers are back in balance. Hydration will be critical. Of course he’ll be getting IV fluids, but I plan to get as much water into his body as I can. According to Cody’s mom, and to many others who have gone through this phase, water and movement are Benjamin’s keys to going home.

Michael’s mother will join us on our trip over the Skyway in the morning. Michael will come later in the day, and Michael’s sister will retrieve Banyan from school and make sure he gets to basketball practice. Later in the week, my sister will relieve me so that I can attend Banyan’s performance in the school variety show. I know that our children can’t truly realize how lucky they are to be at the center of such a loving and supporting village. But I realize it. There are many parents in and out of the seventh floor who go it alone. There are children who sleep in those rooms by themselves, buzzing the nurses to change their fluids at 3am, watching teams of doctors talking about them through closed doors. We may be facing some uncomfortable battles right now, but we are loved, we are cared for, and our boys have every single thing they need. We are ready for this next phase.