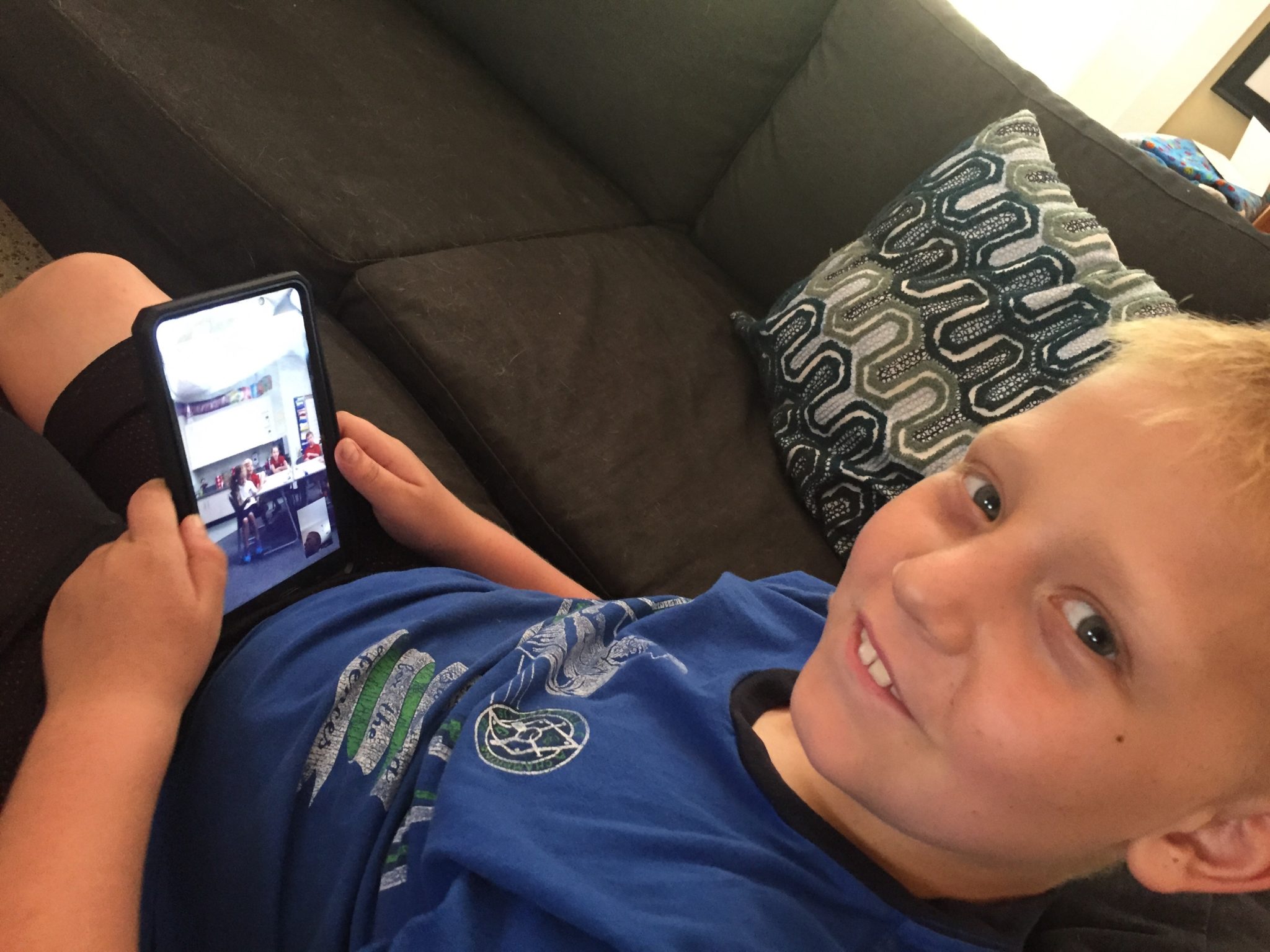 In the morning, Benjamin did his schoolwork enthusiastically and without complaint. We are nearly caught up heading into tomorrow’s potentially long hospital day. Just before lunch we Skyped with Benji’s classmates. I had sent Mrs. West a Charlie Brown episode about a little girl with leukemia, and today, she showed it to the class. Our Skype call was a sweet blend of insightful questions, silly jokes and funny faces. I’m so thankful Benji has been able to stay connected in this way, through HopeCam. I’m so thankful for his teacher, who has kept his friends engaged in his healing.

In the afternoon, we stocked up on produce from a local market and made a delicious lunch. Then we walked to a friend’s house where I was given a title I never thought I’d have: Prom Queen. A group of mothers in my village held their annual “Mom Prom” this weekend and chose me winner, in my absence. I took a gorgeous bouquet, a gift basket, and the love of my community home with me. Later I was able to attend a terrific performance by Banyan’s class at school, thanks to our supportive family. He’s now used to not knowing if I will be able to attend these kinds of moments. I loved seeing the look on his face when I walked in.

In the evening, while Michael took the boys to Banyan’s basketball practice, I walked the Ringling Bridge alone. A strong wind was coming from the east and gave me an extra obstacle to push against. I needed it. I find myself wondering lately if I’ve been too focused on living in the moment. I don’t think about tomorrow very often anymore. This is a protective mechanism, and it has worked beautifully so far. But it has its downfalls too. I have a hard time planning anything. I’m becoming kind of forgetful. And when tomorrows like the one I’m facing now creep up again, they hit me harder than they should. I find myself scrolling through photographs of our journey up to now, refreshing the wounds of the early days and reminding myself that it’s all real.

I would say I am peacefully nervous. I’m nervous because I don’t know what will happen tomorrow, but I am in a place of acceptance with either outcome. If Benjamin’s absolute neutrophil count (ANC) is too low, we will go home, and wait. If his counts are high enough, we will move forward with the bone marrow aspirate that will be scanned for minimal residual disease (MRD). We’ve been here before, at this waiting place. It isn’t more comfortable, but it is easier to accept.

Benji’s friend Cody made counts today, and he is officially in long term maintenance. This is cause for celebration. He is out of frontline treatment and will now take chemotherapy daily at home and only visit the clinic once a month. His mother called me today with the great news. In our conversation, she reminded me that when Cody was where Benjamin is now, they were delayed a full three weeks before moving forward. I have no expectations for tomorrow. Benji’s ANC could be zero, or it could be a thousand. At this point, neither number would surprise me.

I think Benjamin has been living in the moment as well. On nights like this, when reality is just a sleep away, his questions intensify. After our chapters of Roald Dahl were closed (now we’re on to The BFG), Benji was restless. He said, “I just wish I could be like Banyan. Like a normal kid.” I try not to let my emotions show during such statements, even though my heart jumps into my throat. He said it because his shirt had just brushed against his port. It happens a lot and it annoys him. It must be a constant reminder of the not normal.

I told Benjamin again that none of us would have ever wished this for him, but that he was handling everything so extraordinarily well. That he was inspiring total strangers with his bravery and strength. That he was inspiring us. He asked, “Why did you and dad cry so much when you first found out?” I thought about that one for a second. “Because we knew what you were going to have to go through to get better.”