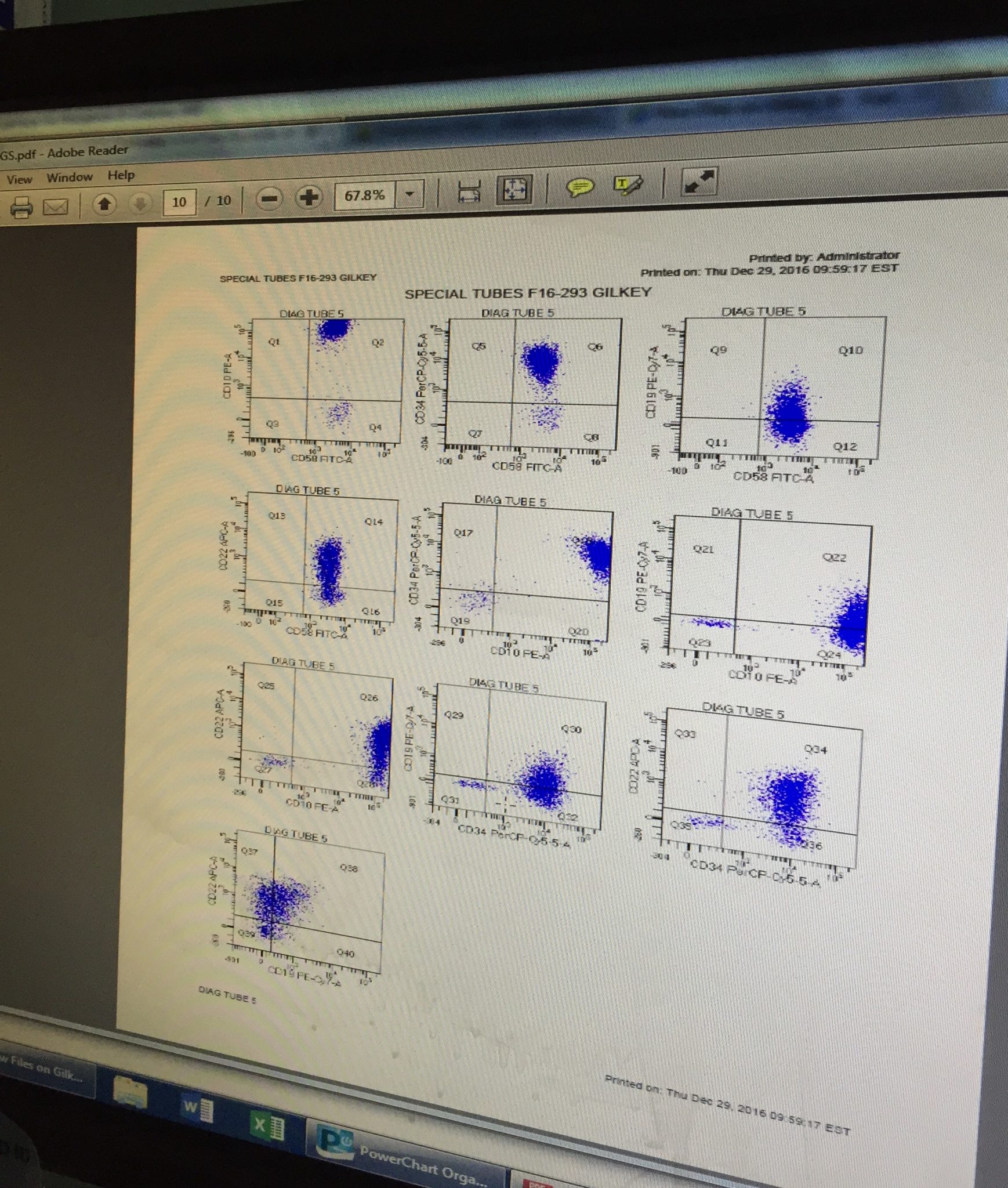 We received the results of Benjamin’s bone marrow aspirate today. We don’t have the complete analysis, and a clear path has not yet been laid in front of us. But the news we learned feels like good news, and until we have more information, we choose to accept this as a positive first step.

I had a difficult time getting to sleep last night. When I woke up for shift change I felt tired but determined. Whatever information we would learn today, we would use it to make the best decisions possible for Benjamin’s healing. Benjamin’s morning numbers reflected a higher leukemia percentage, but his total blast count is still greatly diminished from the Inotuzumab. I’ve stopped being so concerned about the day to day changes. Trends are more telling. Yesterday’s red blood and platelet transfusions both held nicely, and he wouldn’t need more today. He is still profoundly neutropenic and has been for weeks now.

Benji and I went back to sleep for an hour or so, and woke up for daily rounds. The attending physician told me that Dr. Oshrine was going over the results of yesterday’s bone marrow aspirate with the pathologist this morning and would be in to see us shortly. I told her when we expected Michael, and asked her to pass the information along to Dr. Oshrine so that he could schedule his visit accordingly. Even if it meant more waiting, I needed Michael with me for this conversation.

Michael brought bagels this morning and Benjamin ate a quarter of one. He would follow that with fresh mango for lunch, and later, when Kathy and Gana came to visit, he ate some cheese and crackers, a couple of bites of pasta, and some bread and cherries. For the second straight day, he didn’t vomit. And while he had little winces and moans throughout the day, he only had three windows of time during which his belly pain was severe. Things are definitely improving.

The live streaming nest of bald eagles was the backdrop again today in our room. We were so excited when the first “pip” finally happened at around 2:30pm. We’d been waiting nervously for this one; there was some concern that the first egg wasn’t viable. We opened our door and were calling to the nurses to come and see. Amid the commotion I heard Benji say, “Mom, Dr. Oshrine.” He was on the floor. I took a deep breath.

Michael and I waited for Dr. Oshrine to come into our room for several minutes. He was at the nurse’s station engaged in what looked like light, casual conversation. I kept telling myself this has to be a good sign. He finally came in, and as always, addressed his friend Benji first. Then we all sat down. He began by telling us that the pathology report was preliminary and the exact percentage of infection in Benjamin’s marrow is undetermined, but that it looks to be greater than 25% (their levels are <5%, 5-25%, and >25%). We all expected this. I would have been surprised by anything else.

Next Dr. Oshrine said that he had contacted CHOP with the preliminary results and some logistical questions about how we might proceed, should we enroll in the clinical trial there. I interrupted him with the question that matters most now–does this mean all of the cell surfaces still have CD22 protein? Dr. Oshrine said that was still the key piece of information we need to lock down. At first glance, the pathology report looks promising. It appears as though all of Benjamin’s cells contain the protein, though some show a higher concentration than others. So CHOP requested the specific plots from the report to make a final decision on whether Benjamin is a good candidate for the CAR-T therapy that targets the protein.

The logistical questions we’ll also be waiting for, should Benjamin be accepted at CHOP, are about initializing the T-cells collected by apheresis, whether we need to travel to Philadelphia first for an initial appointment, and what kind of interim therapy their team recommends while we wait for manufacturing. None of these things matter until he’s enrolled in the trial. We must rely on our ability to live in the moment for a little while longer. Dr. Oshrine will be out of the hospital until Tuesday, but he promised to forward me any pertinent emails. I told him I’d rather hear things from him, even via email, than from the team on the floor.

One of the nurse practitioners was in the room with us while Dr. Oshrine was going over everything. She offered to bring in the palliative care team to help Benjamin feel more comfortable and to manage his symptoms. It was a natural segue; we had just been talking about the possibility of having him home more often, and she was trying to think about ways to make that work if Benjamin was still feeling uncomfortable. But palliative care has such a scary connotation, whether or not it is justified. We thanked her and told her we would consider it.

Before he left, we asked Dr. Oshrine if we could see the plots that he sent to CHOP illustrating the concentration of proteins on Benji’s leukemia cells. We tried to keep up as he explained the x axis and y axis and ubiquitous proteins and colonies and clusters and continua. The graphics were encouraging. We could clearly see that most of the CD22 was in strong, positive clusters. How much CD22 is enough is the question that CHOP must decide now.