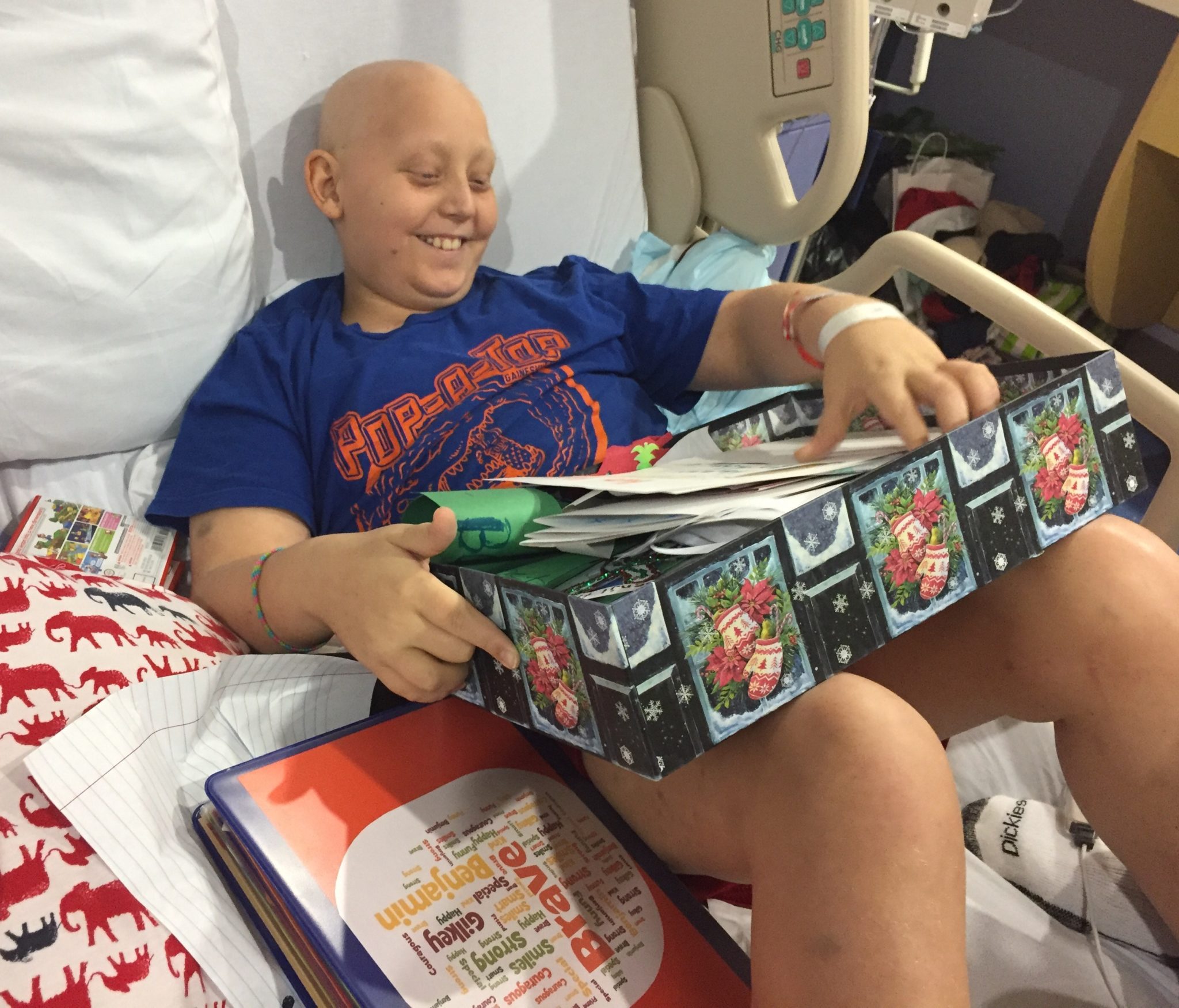 It’s 3:45am. Benjamin just vomited every bit of last night’s nourishment from his body. He has abdominal pain he can’t describe. I don’t know anymore if it’s a result of the medicine or if there is fluid trapped in his belly or if something else is wrong, like maybe those polyps have developed and we have no way to know. I came here to find the gratitude because right now I’m just so angry he has to go through this. I’m grateful he is resting now, despite the incessant beeping of his IV pump. I’m grateful I know how to take care of him. I’m grateful he speaks up for himself and uses his voice. I’m grateful he is so sound of mind that he endures all of this with grace and humor and not an ounce of whining or drama. I need to do the same. I need to take a deep breath.

I didn’t get out of bed at shift change. Benjamin was asleep in my arms and I didn’t dare move him. I whispered to our nurse to ask if she had his numbers yet, and she did. His trends continue. His white cell count and leukemia percentage both dropped again; his white cells are 35% leukemic. Slow and steady. His platelets dropped down to 5,000, right at the threshold of transfusion, so we held off. His hemoglobin took the biggest drop, from 7.7 to 6.5. He would get red blood later in the day. I went back to sleep.

Benjamin was only awake for a couple of hours before taking a long midday nap. He is still taking Vancomycin (which we can hopefully discontinue tomorrow) and the premedication with Benadryl makes him really drowsy. His tummy was hurting all morning. During rounds, the team was trying to offer suggestions to make him feel better, mostly involving adjusting his medications.

I couldn’t shake last night’s worry, so I went to the ARNP’s office and asked them (again) if they thought there was any chance Benjamin’s spleen had ruptured. No, absolutely not. They felt it definitively. I asked if his polyps could have developed into anything that might cause pain. No to that also. That kind of development would result in abnormal stools. I asked the team if we could do another ultrasound, just to rule out anything we may be missing. They agreed it would be prudent, and also suggested a midday blood draw to examine pancreas enzymes.

The ultrasound technician came into our room while Benji slept. I lowered the blinds and gently woke him up to tell him what was happening. He cooperated so sweetly, even while he slept, moving his body as she asked and withstanding the goopy gel. I watched the screen as she measured his pancreas, liver, gall bladder and spleen. I could see that his spleen had grown to 20cm. It was 18cm at the beginning of November (“normal” would be 11cm). Later we got the official results, and no red flags were raised. Other than the enlarged spleen and liver, which were both expected, everything looks fine. Not even any retained fluid. And his pancreas enzymes were normal as well. It was a relief, and I’m glad the team did the tests to be sure.

When Benji woke up he looked so small to me. He was slow to kick into gear, but when he did, he was himself, peaceful and content. Despite my best efforts, he wouldn’t eat or move his body for most of the day, but he engaged in plenty of creative of activity from his bed. He had a transfusion of packed red blood cells this afternoon. His tummy pain intensified as the sun was setting, so we gave him Marinol. It worked beautifully to increase his appetite and his mood, just in time for Michael and Banyan to arrive.

Michael brought with him a huge box of cards and letters from Benji’s classmates. It brightened Benjamin’s spirits so much to read their sweet and hilarious words–almost as much as it brightened him to see his brother. We hadn’t seen Banyan since the weekend. There is nothing more soothing than having the four of us together. We watched a movie and shared a meal, the first Benji ate all day. He fell asleep lying next to his daddy.

I hope Benji has a better night’s sleep tonight. I hope he wakes up free from pain. I need a good night’s sleep as well. Last night’s anger morphed into some unexpected emotions throughout the day, none of them healthy. Fear finds a stronger hold when sleep is scarce, but gratitude is always stronger.

Tonight I am thankful that Benjamin’s blasts continue to decline through two doses of Inotuzumab, and that’s what I choose to focus on. He’s been on the drug now for as long as he was on Blinatumomab; by this time on that medication, it was clear that it wasn’t working. That is not the case now. This is working. Fear threatens to remind me that this could change at any time, but I am trying not to give that possibility my attention. The truth is now, and now holds hope and love, both of which deserve nothing but gratitude.