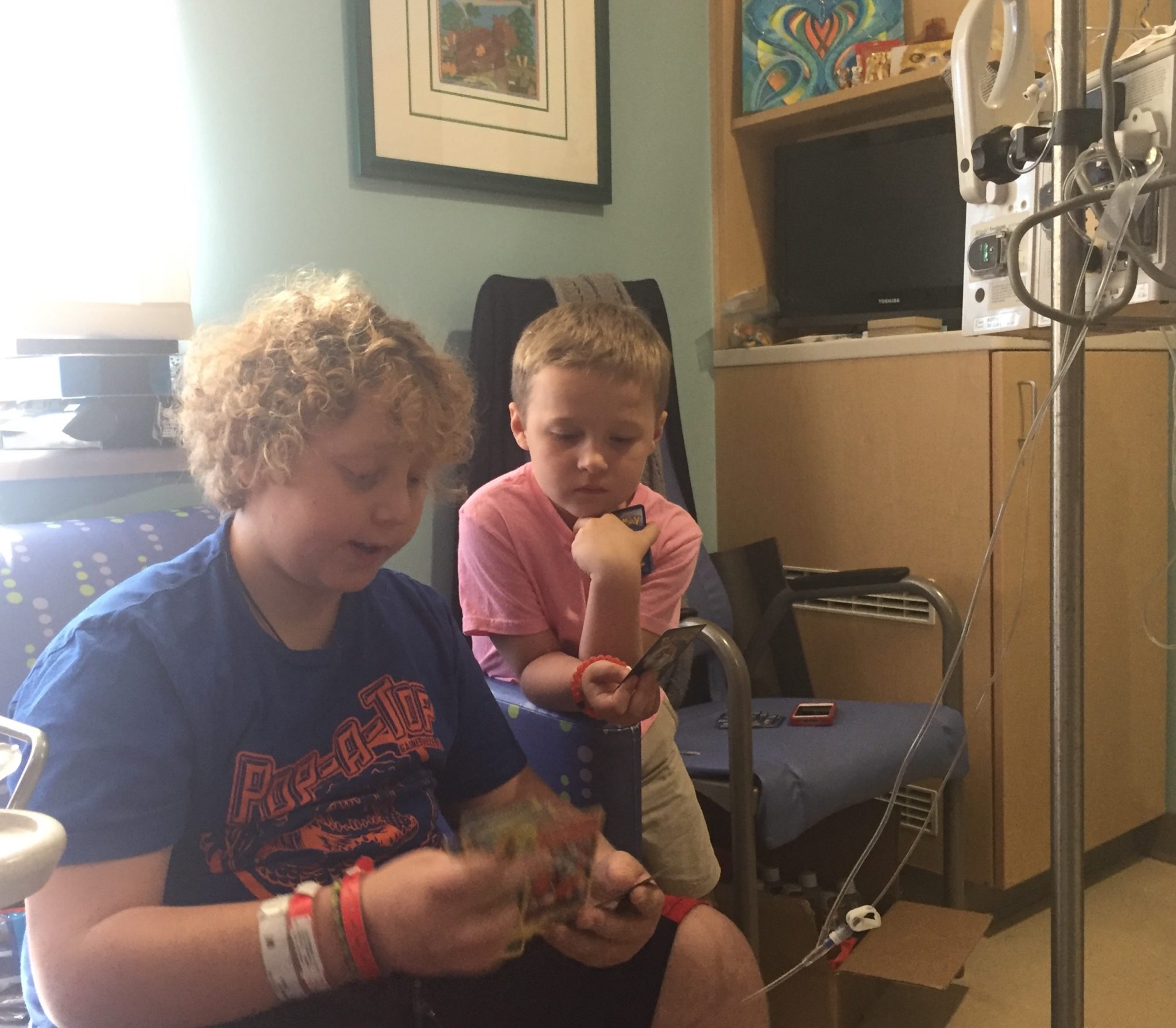 Benjamin had a great day today. So did Banyan. I’m grateful for two happy children, and for the first step on a new path.

I woke up to the sounds of shift change and saw a bag of rich red blood dripping into my sleeping boy’s veins. I tiptoed over to look at the screen with the nurses. My heart sank low. Benji’s white blood cell count skyrocketed over 30,000. His blasts were up to 84%. His hemoglobin had dipped below 7.0, hence the transfusion, and his platelets practically didn’t change. The numbers made me question the decision to end the Blinatumomab. I wondered if maybe it had been doing more good than we thought. Of course, this wasn’t logical. I know it was the right choice.

Gana took Banyan and two of his friends to the last home Gator football game of the season today. I was so thankful he could have this experience. While they traveled to Gainesville, Michael brought Lilye and Benji’s friend Vance up to the hospital, and they played with Benji all morning. It was so sweet to see the boys trading Pokemon cards together and flipping water bottles and being normal third grade buddies. After a few laps around the floor with the wagon and an excursion to the playroom, Benji said his knees were tired. I pictured his marrow and marveled at his strength. We situated him back in the room, and Vance’s mama came to pick him up. The first dose of Benji’s new chemo was ready to be hung.

While the nurses were gowning up and getting the medicine ready to be administered sequentially (Etoposide first, then Cyclophosphamide), I went into the hall and told the Clinical Manager about the morning labs predicating my illogical fear that the Blinatumomab had been discontinued prematurely. She reassured me. The Blinatumomab absolutely was not working. I asked her if she expected today’s chemo to bring down the white blood cell count and the blast percentage right away, and she said that it could take a few days. The medicines have their nadir periods like most of Benji’s other chemotherapies. We have to be patient, and hope that the incredible strength of his body continues until these medicines can do their jobs.

We watched Benjamin very carefully after the Etoposide began its hour long drip. It’s a medicine he’s never seen before and we knew an allergic reaction was possible. He was absolutely fine. All of his vital signs were perfect. He and Lilye cozied up to a movie. When the Etoposide finished, the Cyclophosphamide began. He handled this medicine beautifully as well.

Sarah and Lotus joined us for dinner. By the time they arrived, Benji’s tummy was feeling too sensitive to eat, and he looked extremely pale. But his spirits were still high and he was happy.

After we said goodnight to our family, our nurse came in to draw the first eight hour blood level to check Benji’s chemistries after the new medicine. They also drew a CBC to see if he needed platelets. The results came back and they were slightly refreshing. He does need platelets–they are only 6,000–but his white blood cell count came down to 20,000, and his blasts are at 69%. It was a trend in the right direction and I hope it will mean a good night’s sleep for both of us.

We’ve heard no word back from Philly yet, but it’s the weekend. On Monday we’ll have more answers. We’ve taken our first steps on Benji’s new path, and we’re heading in the right direction. Tomorrow there is a blood drive and bone marrow registry in Benjamin’s honor. We will fall asleep listening to the drip of platelets and knowing that we are surrounded by kindness and love.

Leave a Reply to Troy and Sunny Cancel reply