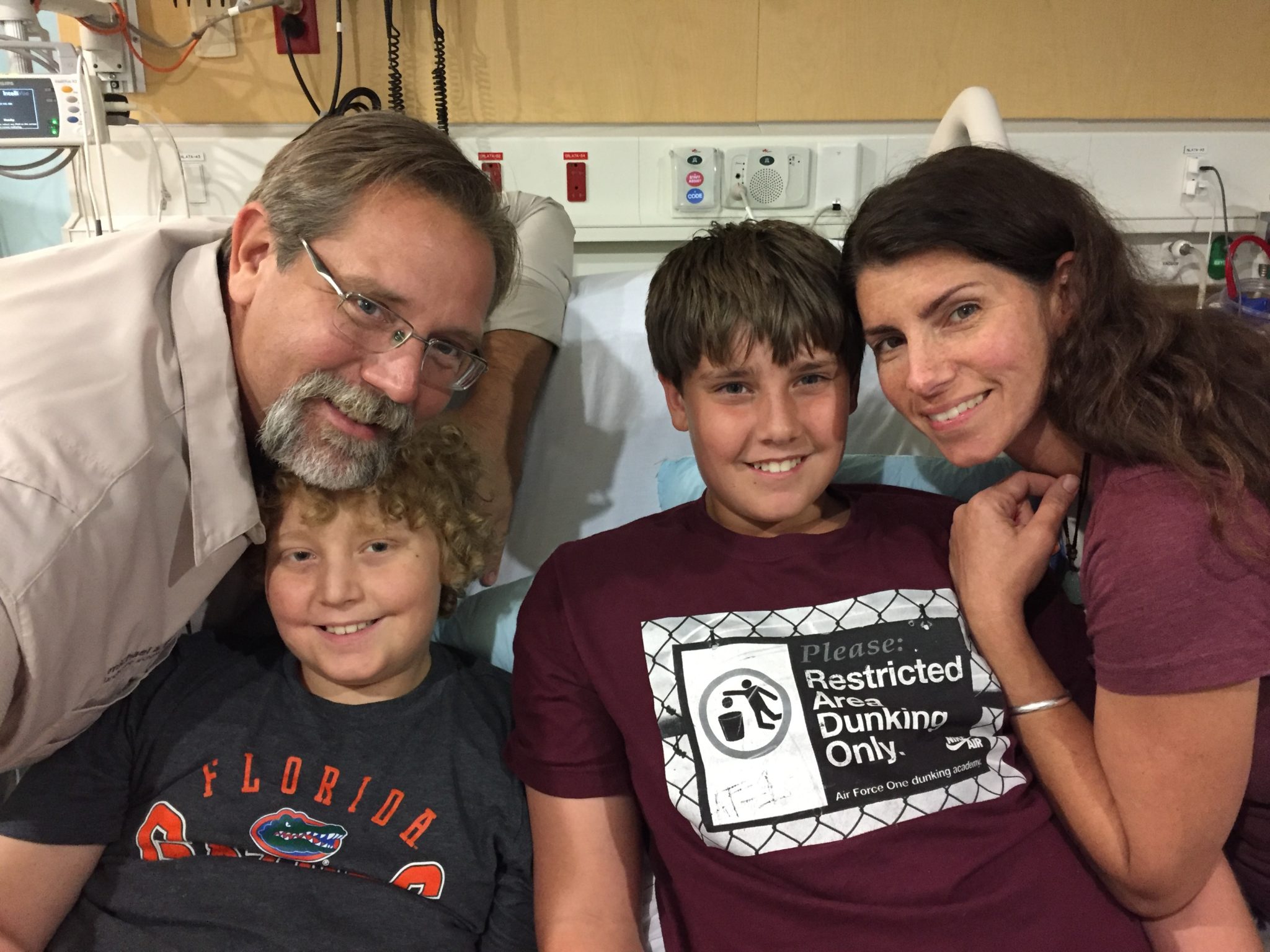 I was hopeful this morning’s labs would show some reverse in yesterday’s trend, but they did not. The blasts in Benji’s blood increased a little more. His platelet transfusion was completely absorbed, and he will likely need another one tomorrow. His bladder issues continue.

I sat with my coffee and listened to my boy sleep while I read dozens of sweet birthday wishes from family and friends. I’ve been totally delinquent in my friendships lately. It was nice to be wrapped up with so much love and understanding. Feeling supported, I switched gears to try and do some research. There is precious little out there. The moms’ group has now become the only source of accurate information on available trials, which hospitals are easier to work with, etc. I was able to find a few medicines, proteins, tests and studies to bring to the table when I saw Dr. Oshrine.

Benji slept in after a late night entertaining the nurses. He was in good spirits when he woke up, though his belly hurt. Sarah came to visit today. While she and Benji were building Legos, Dr. Mayer and her entourage did their rounds. She came in for a quick exam, then I followed her out into the hall.

I started in on all of my questions, and Dr. Mayer let me know quickly that the answers I need are the ones she was waiting for as well. She said Dr. Oshrine was waiting on answers from the other centers he’d contacted, and the team was discussing titration options with the pharmacy. She said they’d let me know as soon as a plan was formed. I told her that I needed to see, with my own eyes, people moving with urgency.

Benji wanted alfredo-y noodles for lunch, so alfredo-y noodles we procured. Sarah continued on with Lego duty and I went downstairs to pick up the meal. It felt nice to get some fresh air. The day was gorgeous.

While I was gone, the ARNP stopped by. I took a walk to find her. She said they’d all decided to titrate Benji’s Blinatumomab up this afternoon. I was a little surprised by the timing but agreed nonetheless. However, a couple of hours later, plans changed. In order to give ample time for premedication with Dexamethasone and have the majority of Benjamin’s most likely window for cytokine release fall within day shift, they decided to titrate up early Tuesday morning at 6am, just one day ahead of schedule.

Sarah stayed long enough to conduct some fun science projects with Benji and some of his friends from the floor. Another boy from Sarasota, a little older than Banyan, is here this week, as well as a teenaged buddy from previous admissions. Friends make things a little easier up here. Benjamin looks at these older boys with such admiration. He finds great comfort in being able to relate to things that no one else can relate to.

Dr. Oshrine came by in the afternoon. Dr. Mayer was with him. He was honest. He said that Benji’s resistance to the low dose of Blinatumomab is not an encouraging sign. His colleagues in Philadelphia haven’t seen the sort of increase he’s had with subsequent success on the medicine. We are titrating up with the immunotherapy anyway. Dr. Oshrine is searching for the right center that could treat Benjamin on a clinical trial for CAR-T cell therapy. This process takes time. During that time, we will continue to fervently hope that the Blinatumomab works at this higher dose.

It seems likely that a population of Benjamin’s leukemia cells has mutated into a resistant population, much like bacteria become resistant to antibiotics. In that case (as well as for other diagnostic reasons) a bone marrow aspirate will be necessary before any kind of CAR T-Cell trial can begin. Benjamin will likely have this aspirate done late this week or early next week.

I ran through the medicines and proteins and tests on my list. I was kind of grasping at straws. Barring any revelations in other available studies, it seems clear that if the Blinatumomab doesn’t work at the higher dose, we will be leaving our home at All Children’s Hospital. Dr. Oshrine asked if we had a geographical preference. I said through tears that we would go wherever he told us to go. We need his guidance now.

Dr. Oshrine used the word blessing as our conversation ended. This word stuck with me, and not just because it was out of character for our doctor. He said that it was a blessing that Benjamin is doing so well, clinically. Other people with numbers like his might have infections, or begin to have organ damage that would prevent them from enrolling in a clinical trial. At that moment, Benjamin was walking up and down the halls, playing with the nurses, showing his strength. I followed Dr. Oshrine’s eyes as he watched my son. There was sadness there. But there was also awe.

Michael arrived shortly after Sarah left. Kathy, Gana and Banyan came a little while later. We had a lovely meal together. I was grateful they were all here tonight. I even got to do a bit of homework with Banyan, which I’ve missed. As strange as it is, I had a really nice birthday. I was surrounded by people I love.

Benjamin stayed up super late again tonight. His energy seems boundless. He made balloon animals for all of the nurses and several patients on the floor. He was talking and asking questions and cracking jokes with everyone. Finally he fell asleep after midnight, when his large prophylactic dose of Dexamethasone was finished. He’ll get a smaller dose at 5:30am. He’ll get reaccessed at 6am, and the new dose of Blinatumomab will be hung at 6:30am. The same risks apply that we were watching for last week. Cytokine Release Syndrome and neurotoxicities are the big ones.

We are in a great sea of unknown elements right now. I don’t know what will happen tomorrow. Does anyone? I’m enjoying every moment I can, even if I have to allow myself moments I can’t. I am holding onto the life jacket that is the constancy around us. Our mighty village. The love and support of our family. My incredible husband and Benji’s amazing big brother. Benjamin’s strength and tenacity. I am in awe.