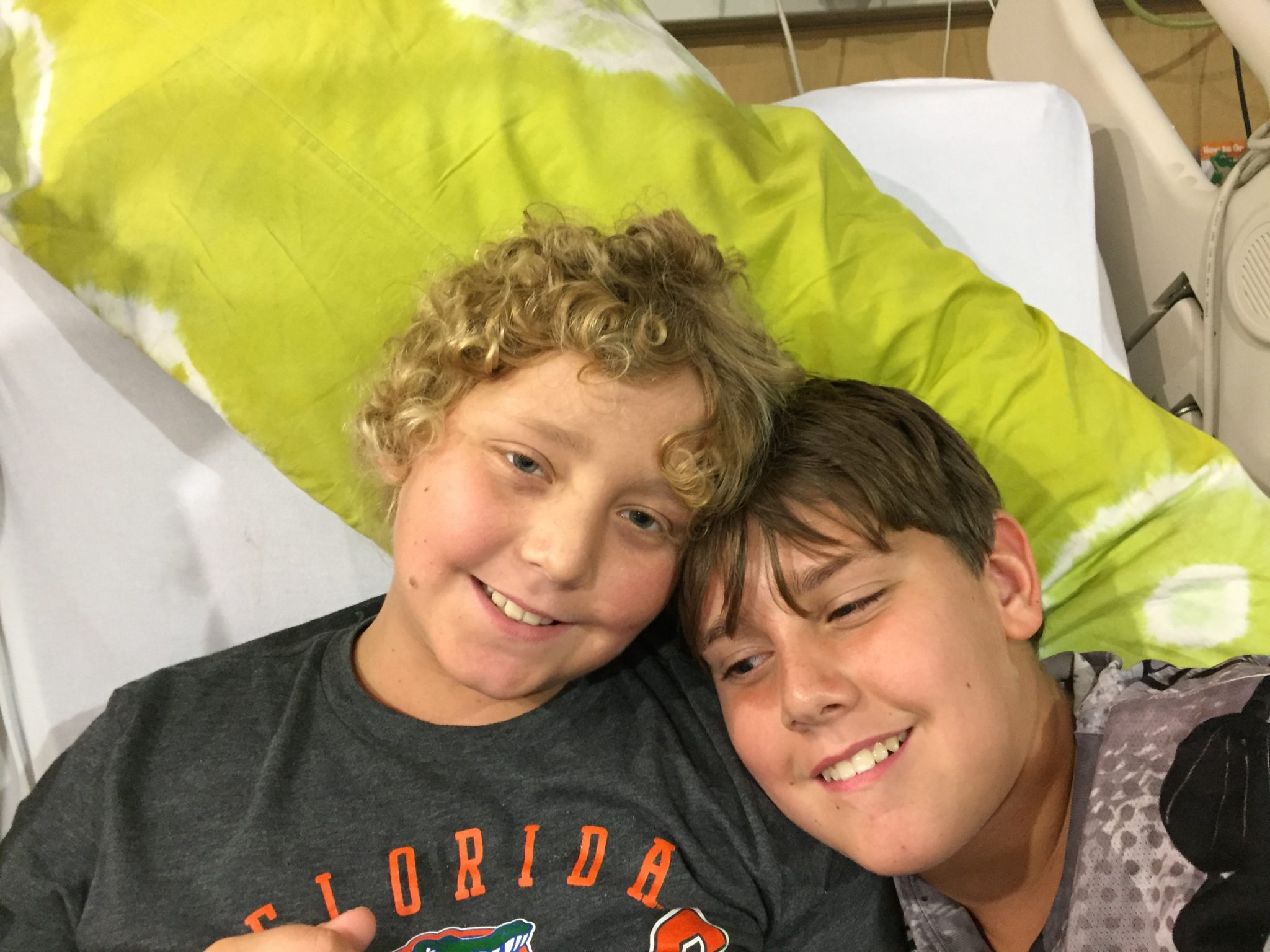 Benjamin’s tiredness continued today. He slept until 10am. Our nurse was wonderful and flexible and let him sleep, holding his morning medicine an hour to accommodate. It sounds minor, but not everyone would have done so, and I appreciated it.

Benji’s numbers continue to move in a therapeutic direction: his platelets are suppressed back down to 13,000, his ANC and hemoglobin are slowly declining, his chemistry is balancing out. One of the first things he said this morning was, “Can I have cheese yet?” They’re keeping him on a low phosphorous diet, but during rounds they said we could try the occasional serving of cheese and see how his numbers look. That was the right answer. Kathy is bringing one of Benji’s favorites tomorrow: shrimp and grits. Cheese is kind of mandatory.

The biggest numbers the team is keeping an eye on now are Benjamin’s weight and fluid output. He is fluctuating about 2 kilograms between morning and night, and he’s urinating a little less than he was a few days ago. After ten days on Dexamethasone it’s hard to tell if he is additionally puffy from fluid. His systems are all functioning optimally; no water anywhere there shouldn’t be, kidneys working great, blood pressure perfect. They’ll continue to monitor his weight and input and output, and decide if a dose of lasix is necessary.

Aunt Sarah came for another Friday visit and some more science fun. During their experiment, Benji took his second dose of Dasatanib and put numbing cream on his legs for his fourth round of Erwinia shots. When it was time to take them, he was more than ready. He wanted it over with. This time, he didn’t flinch, his eyes didn’t even water. He just wanted to take his laps immediately. He was incredible.

The day was restful. Benji took a few more laps, but he was still so tired. Sarah and I tried to encourage a walk downstairs and out into the garden, but he didn’t want to leave the floor, and hardly wanted to leave his room. In the comfort of his bed, his spirits were high.

Dr. Oshrine came in to see Benji this afternoon. I thought he was just paying a visit to his patient on his way home for the weekend. But when he asked Benji if he could speak to me alone again, I knew what he was going to say. I hoped I’d be wrong, but I wasn’t.

Banyan is not a match. He won’t be Benjamin’s bone marrow donor. I felt that familiar punch to the stomach when I heard the words. I’m getting really tired of that feeling. Dr. Oshrine was very quick to encourage me not to consider this news a big setback. Benjamin will have a bone marrow transplant, no matter what. Recent advancements in the procedure will make the transplant a success, whether it’s from an unrelated donor (the next best choice, provided there is a match) or from Michael or me (the third option). We talked for a long time, and as usual, Dr. Oshrine’s knowledge and confidence calmed me down a little. But my mind was racing. Will Banyan be devastated? Will there be a match? How much extra chemo will Benji have to get to prevent Graft vs. Host Disease?

I took a walk around the floor. On my way back to the room, I saw our sweet nurse talking to a man with a very kind smile. She introduced him as her uncle, who had been the All Children’s chaplain for nine years. She introduced me as Benji’s mom. I don’t know what else she’d told her uncle, but he looked at me with such intention, and said, “May you be given everything you need.” Amen, brother.

Michael and Banyan arrived a little while later bearing a huge box of gifts from a third grade class at Benji’s school. When Sarah left I walked out with her, then picked up dinner and a few groceries. Once dinner was  eaten back on the seventh floor, we held another family meeting–we’ve had some pretty intense ones lately–and delivered the news of the day.

Banyan’s eyes immediately filled with tears. He couldn’t help it. He wanted to be a match so badly. We wanted him to also. It was impossible not to set ourselves up for disappointment here. But we will move on and move forward through this, as we have learned to do well.

Banyan recovered from his beautiful emotional response quickly. We assured him that there are many ways he will be helping his brother through this. He already is.