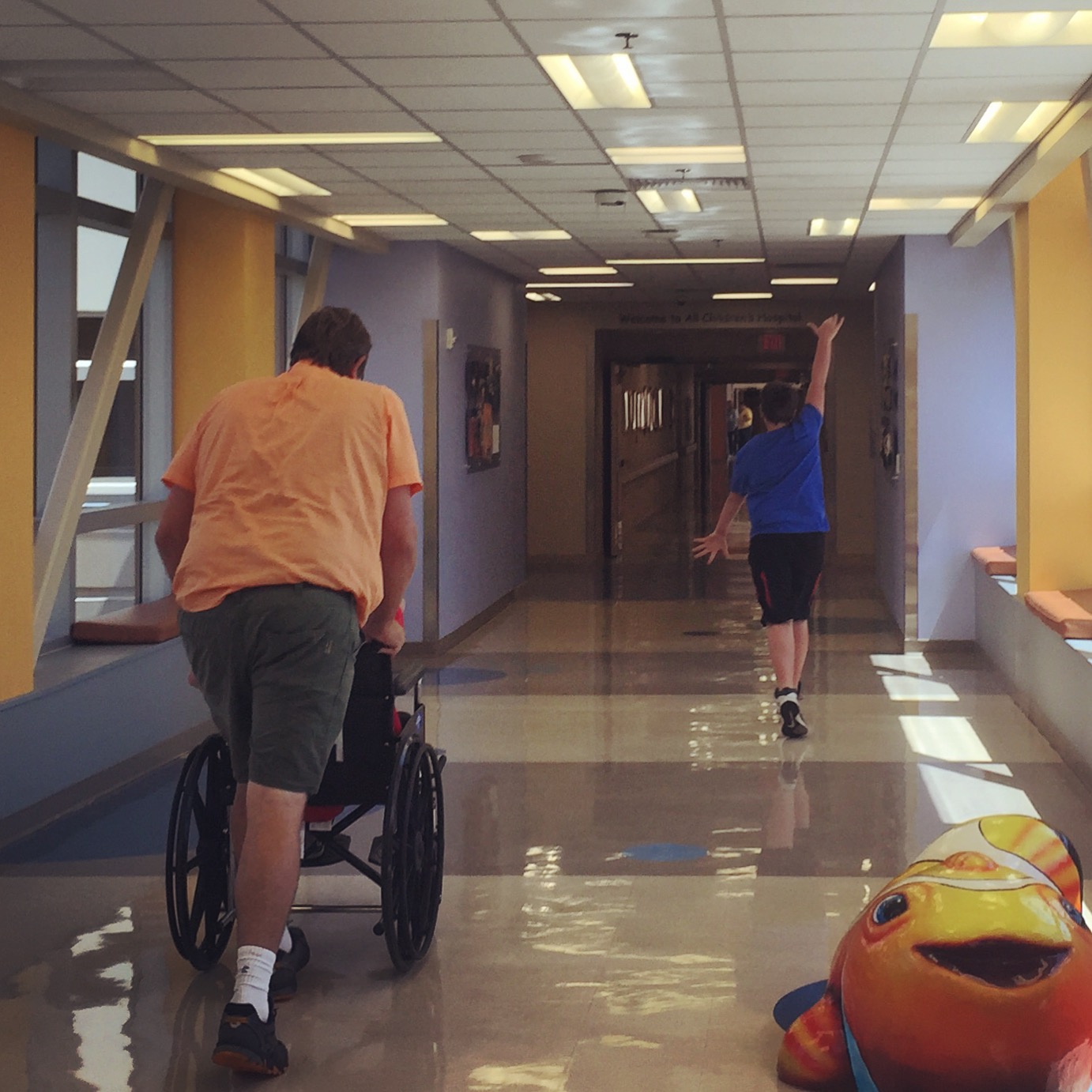 Today, Benji began the fourth of eleven total 84-day cycles during this long term maintenance phase of treatment. It has been a very long day, for Benjamin especially. I am so thankful he is sleeping peacefully now.

The morning didn’t start so smoothly. Benji woke up crying from his worst ear pain yet after tossing and turning all night. Tears were streaming down his face. This did not seem like neuropathy. While it may not have behaved like swimmer’s ear last week, it is clearly behaving like swimmer’s ear now, especially following three consecutive days in the water.

Benji asked for a warm bath, and we were careful to keep his ears dry. Fortunately the warmth helped quite a bit. We put the numbing cream and transparent dressing over his port just before leaving the house. I pulled Banyan aside and reminded him that on lumbar puncture days, Michael and I refrain from eating so as not to upset Benji, but that I didn’t expect him to do that–I’d just ask that he eat on the down low, out of eyesight. I was ready to sneak him a muffin, but Banyan refused in solidarity, and didn’t complain a bit. Thank you, big brother.

Michael drove, I knitted, and the boys played video games as we headed north. Just before we crossed the Skyway, however, Benji silently vomited in the backseat. I climbed over to clean him up. He looked directly at me and said, “I was thinking about it too much.” The boy is so wise. He has such a sweet and authentic self-awareness.

Benji vomited again as we pulled into the parking garage. He asked for Michael to bring him a wheelchair. I tried to validate feelings I can’t understand, and remind him that he has a strength within him that has carried him time and again throughout the halls of this building. It will not let you fail. We will make it through today, and it will be three more months before another lumbar puncture. Benji put on his game face, I pulled out our antiemetic medicine, and we got in the elevator.

Michael and Banyan make the perfect tag team to keep Benjamin entertained. With Banyan leaving for camp in just four days, I was so grateful to share this experience with all of us together. We expected to have to wait a little longer than usual on the day after a holiday, and sure enough, the clinic was packed. I saw lots of familiar faces, and lots of new faces as well. Scared mothers and fathers standing up straighter than normal. Brave, bald teenagers answering their own medical questions. Other big brothers entertaining little ones with identifying bracelets. Babies in strollers with masks covering their faces.

Benjamin summoned up all of his Jedi bravery during his port access. He just went there. Michael and I did what we could do to help him, but he was very much alone as the needle punctured his chest and the saline started its journey into his body. I held my breath, waiting for the tube to show blood return. It seemed like it took a lot longer than usual, but it was there, as always. I am so thankful for Benjamin’s trusty port.

We got lucky again today and were able to see Dr. Oshrine. He is our guy. His thorough examination confirmed the presence of inflammation in Benji’s right ear, but he didn’t detect an infection. He eliminated the possibility of neuropathy (which was a relief) and felt that the drops our family physician prescribed were the right way to go. We resumed them immediately, right there in the exam room. We talked about Benjamin’s nausea and stomach pain last week, which Dr. Oshrine agreed was likely a result of his increase in 6MP.  We talked about the fact that Benjamin has had a perpetual runny nose since maintenance began, and Dr. Oshrine suggested an antihistamine to rule out allergen threats. It was a reasonable suggestion, but I balked at it a bit. I feel certain we have all been cycling through a season of viral threats, staved off by our powerful immunity arsenal. Another daily medication, especially without the verification of an allergy, feels counterintuitive.

I asked Dr. Oshrine about the genetic testing we’d discussed, and he said that Dr. Crenshaw (the pediatric geneticist) has been way behind lately and unable to push forward the necessary paperwork for insurance approval. We aren’t in any hurry, but I’ll be bumping both physicians by email to make sure we get the bloodwork on the schedule.

Benjamin’s liver numbers (ALT and AST) came back higher than they have in quite some time, though not high enough to enforce a chemo hold. I’ve been giving him milk thistle sporadically, but this month I’ll try giving it daily and see what the numbers look like in August. His hemoglobin and platelets look perfect. His white blood cell count is elevated, as is his absolute neutrophil count (ANC) at over 5,000, both of which signal to me that he’s fighting an infection (most likely in that right ear). I know those numbers are “supposed” to be lower but I can’t help feeling grateful for them. Infection is not welcome here.

Benjamin wasn’t up for a chemo increase this month, but looking at today’s numbers I would expect an increase in Methotrexate next month, which would put him at the maximum for all medicines–150% strength.

Banyan found a movie on the hospital TV and we waited a while longer for Benji’s medicine to arrive. Krista eventually came in with the IV pole and the hanging bag of Vincristine. She hooked it up and started the drip, and Benjamin didn’t react at all. In fifteen minutes we were cleared for takeoff. We packed up our things and took the elevator down to the Special Procedures Unit.

Michael, Banyan and Benjamin played basketball with the bouncy ball Benji had scored from the clinic and the tiny trash cans in the SPU waiting room. After about half an hour we were called back by a new nurse. “Is this your first time here?” she said. No ma’am. It’s our nineteenth.

Michael and Banyan said goodbye to Benji in the hallway (Michael with a kiss, Banyan with a high five) and they went to go get the pager. I walked with the anesthesiology team to the operating room. I saw Dr. Grana when I walked in and said thank you. I held Benji’s hand and kissed his forehead and told him to dream about diving down to reach for scallops, with their shining blue eyes and snapping shells. I watched the milky medicine enter his body and left when I saw the twitch I needed to see. I walked out feeling very alone, guilty that I was leaving my son in this room with all of these strange people and strange instruments. Nineteen times and it doesn’t get one bit easier.

I melted into Michael for a second and then we divided and conquered; he and Banyan hit the cafeteria for snacks, and I went to the pharmacy for prescriptions. When we reconvened moments later, we saw Dr. Grana walking out of the SPU. This was a good sign. She was smiling and said that Benji had done well, and that his “fluid looked clear.” I have never had any doubt about that. I kind of wish she hadn’t said it.

We waited for over an hour after we saw Dr. Grana for the pager to go off. This seemed like a really long time. Finally it lit up, and when we got to the PACU Benji had just woken up. He was so sleepy. He said with a slur, “They gave me more than usual this time.” He was right. 350mg of Propofol. Next, he asked for a wheelchair. He wanted to go home.

I got the “hour zero” from the nurses so that I can administer Leucovorin at hours 48 and 60, then signed the discharge papers and we were on our way. Michael pushed Benji in the wheelchair to the truck, where we reclined him fully in the front seat to try and avoid a spinal headache. We went to his favorite post-chemo lunch spot, The Fresh Market, then headed home.

After we got Benjamin settled into bed I went to the grocery store to retrieve the ingredients for his favorite healing soup. By the time I got back, he was crying from the pain in his ear. I called the clinic immediately, and my call was returned by a nurse I know well. I wanted to give Benji Tylenol for pain, and that always needs to be cleared by oncology. They don’t want the analgesic to mask a fever that might reveal an infection. I knew it wouldn’t be an issue, as he was just seen today; the phone call was more of a heads up. I thanked the nurse and went to the drugstore to get the proper dosage.

Once Benji took the medicine he started to feel better. He took bath after bath until he was finally ready to fall asleep. I gave him his nightly chemo and the first dose of his new steroid pulse. He was still teary, but he rested his left ear on my right shoulder and started to relax. When his breathing finally slowed, I finally exhaled.