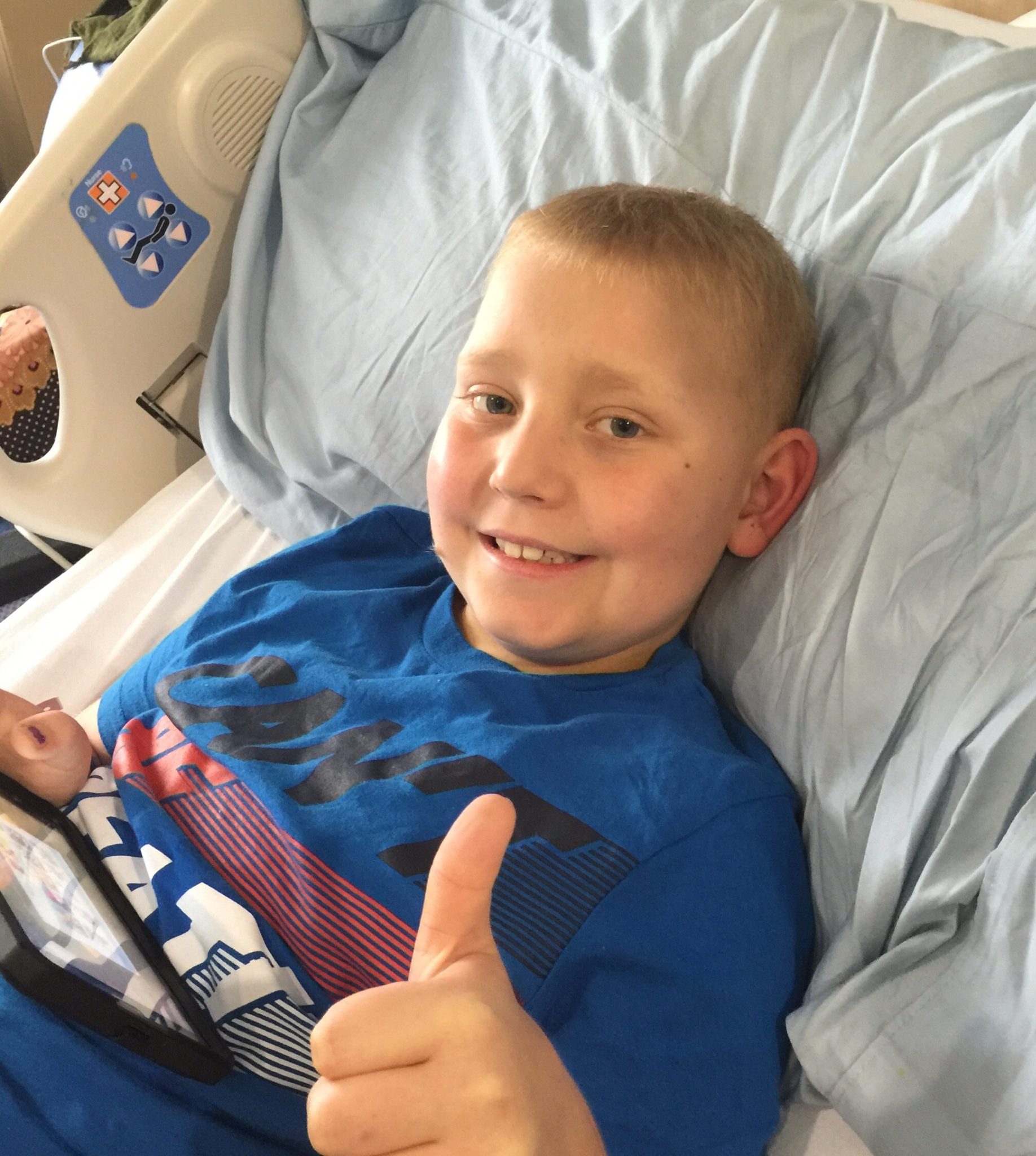 We slept soundly last night. I’m so thankful for the rest, the patience, and the mental acuity that sound sleep provided as the day grew on. I’d need it.

Benjamin’s morning blood count showed a hemoglobin level of 7.0, which meant another transfusion. I was surprised at how far his levels dropped in little over a day. His absolute neutrophil count (ANC) had also dropped, down to 141. Since Benjamin is right in the middle of the nadir period from his Ara-C cycle, the team expects his ANC to decrease all the way to zero. No immunity. They can’t send us packing until he can fight potential bacteria infection on his own again, which is an ANC of 200 and rising. All of this means we aren’t going anywhere for a while; the weekend, perhaps, will find us home.

As Benji received his bag of packed red blood cells, we finally finished James and the Giant Peach, taking turns reading every page. We segued right into a chunk of school time with a unit I’d prepared on the insects in the book. Michael arrived with reinforcements for our longer than expected stay.

We met with a new doctor on the oncology team, Dr. Mayer, who is quite well respected in our hometown–and we could instantly see why. She was kind, compassionate, wildly smart, and honest. Benjamin got out his journal, and asked her his most important question: “Why do you put me to sleep before my lumbar puncture?” She asked what it was he didn’t like about the feeling. He told her it was the “waking up sleepy” part. We explained to Dr. Mayer that he’s been getting higher doses of propofol as the punctures have been getting more frequent, and we were going to talk to anesthesia today about ways to reduce the dosage. Dr. Mayer told Benjamin that she worked for years with children who got lumbar punctures without sleepy medicine, and that not a single child liked it. She said they felt a lot of pain and often asked for sleepy medicine even before it was available. Her answer satisfied him, and they finished their conversation with a chat about the beaches of Sarasota.

Benjamin was in good spirits and relatively focused. We knew we’d be waiting a while for him to be called down to surgery for his lumbar puncture with Intrathecal Methotrexate, so we continued with “school” and played math bingo with Daddy, knocked out some homework, and took a couple of overdue tests. It’s the most we’ve accomplished (academically) in a long stretch, and it passed the time perfectly: Benjamin was spelling the last word on his spelling test (h-u-n-g-r-y) when the folks from surgery came to take us downstairs.

In pre-op, we voiced our concerns about the recent increase in Benjamin’s propofol. A very kind nurse explained that if we use the lidocaine cream we were prescribed for his port on his back, the anesthesiologist may need to use less propofol, as one of its functions is pain analgesic. She showed us how and where to apply the cream. We took a picture for next Monday. When the anesthesiologist came in, we explained Benji’s fear about waking up sleepy, and said that we wanted to make sure we were minimizing the propofol while maximizing his comfort. Michael and I both felt the condescension from the anesthesiologist, but she must have taken it to heart; Benjamin woke up easier and happier than he ever has. We learned in recovery that he got 200 milligrams of propofol versus the 300 milligrams he got last week. What a difference.

We got upstairs and got Benjamin situated comfortably, then the nurses prepared him for his next two doses of chemotherapy. First, he got Vincristine, the medicine we had weekly during induction. This one has shown us several side effects, but we feel prepared for them. Up next was PEG-asparaginase.

I’ve asked lots of questions about PEG in clinic, because I’ve read more negative experiences on the moms’ forums about it than any other medicine. A pretty high percentage of kids have an allergic reaction to PEG, and it almost always appears during the second administration. Benji had this medicine once before, on Day 4 of his treatment. So if he was going to have a reaction, today would be the day.

As the nurse was hanging the bag of PEG on Benji’s IV pole, she said she’d be giving him prophylactic Benadryl. I told her I was sure that one of the oncologists told me that isn’t protocol anymore; I remembered him saying they don’t want to mask any allergic symptoms, as the reaction worsens with each dose. The nurse went to check it out with the doctor on call, and came back confirming what I’d remembered. She skipped the Benadryl.

The PEG began and Michael and I were watching Benji like a hawk. The nurse monitored his vitals, and said all was well. After a few minutes of the medicine I thought we were in the clear. Then he started to cough, and his ears got red. I asked if his throat felt constricted. He said no. The nurse wasn’t alarmed, saying his vitals were still good and it didn’t look like a reaction to the PEG. She left to check on another patient and said she’d be back in a few minutes.

Michael and I took Benji to use the bathroom, and his ears turned brighter. His face started to swell and his eyes became bloodshot. The cough continued. I asked Michael to call the nurse immediately (though I think he was halfway there already). She came in, looked at Benji and called the charge nurse, who called the nurse practitioner, who called the oncologist. The dream team hovered around Benjamin. By this time he’d started itching. He scratched his neck. I asked again if his throat felt funny; this time, he said yes. He got 50 milligrams of Benadryl pushed quickly through his IV. He went to sleep almost immediately. A few minutes later he had a sneezing fit, his heart rate spiked and his oxygen dropped. The team followed the Benadryl with 100 milligrams of hydrocortisone, and put Benjamin back on oxygen. His levels normalized, his color returned, and he slept for nearly four hours.

When he woke, he was a little confused. That dissipated quickly, and his sparkle returned. He ordered late night room service and we watched the movie version of James and the Giant Peach until he fell asleep again.

I was afraid of the PEG. I felt guilty for putting the energy of fear into the possibility of a reaction. But when it was over, when Michael and I finally unclenched our hands and took a breath, overwhelmingly, I felt thankful. If the nurse had administered the Benadryl preventatively, Benjamin’s symptoms wouldn’t have shown us what to do, and a future reaction may have been catastrophic. I was thankful I remembered that particular nugget from the oncologist, thankful I knew what to look for in a reaction, and thankful to Michael and to our incredible support network for empowering me with the time and presence to know these things.

Now, the PEG will be discontinued from Benji’s roadmap, and replaced with another form of asparaginase, most likely shots. Shots are no fun. But neither is anaphylactic shock.

So in 24 hours, Benjamin had a platelet transfusion, a red blood transfusion, antibiotics, Zofran, propofol, Intrathecal Methotrexate, Vincristine, PEG, Benadryl, hydrocortisone, and IV fluids. Today was one of the hardest by far since this journey began. But also one of our proudest. We make a fine team, and we’re behind our man all the way.