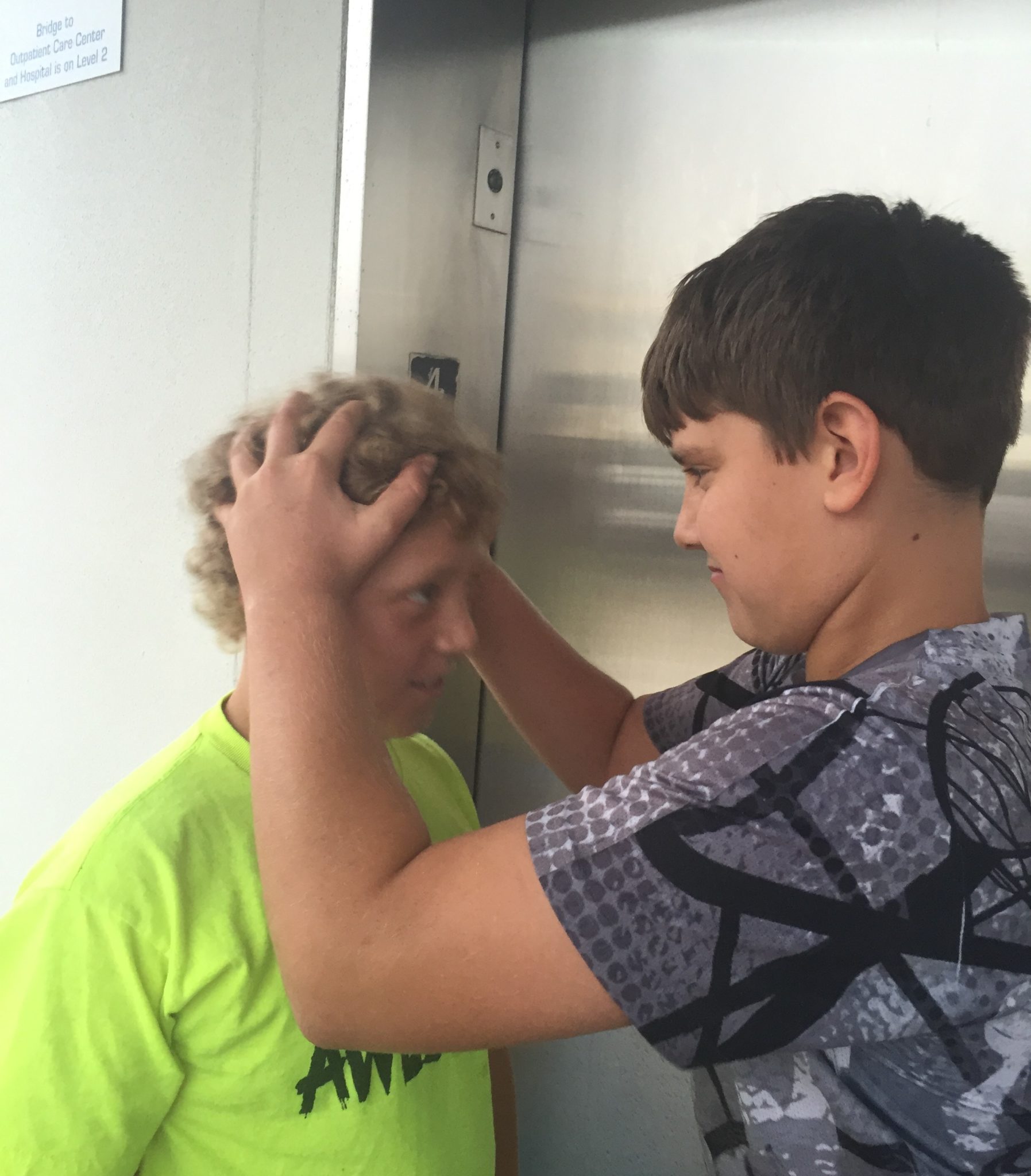 I’m so thankful for the extra time we gave ourselves this morning. I woke up at 6 and we were on the road by 7:30, even though Benjamin’s appointment at the Hematology/Oncology Clinic wasn’t until 9:30. We’d need every minute. The Sunshine Skyway was still closed as a result of Tropical Storm Colin. We’d have to drive to north to Tampa and turn back southbound, where traffic was stop-and-go, and it was pouring.

But things have a way of working themselves out. At exactly 8:30, traffic was at a standstill, and I was able to help Benji put numbing cream on his port and cover it with transparent dressing. Banyan chose an audiobook series–The Lemonade Wars–and it kept us all engaged until we arrived at All Children’s, walking in four minutes before Benji’s appointment time. Banyan was an excellent companion, giving Benji big love outside the elevators and keeping him entertained all morning long.

In the waiting room we saw McKinley and her mama. They handed us an envelope full of rainbow stars McKinley’s grandmother and her friends had made. It was lovely to see them. We were comparing notes on how our children’s maintenance phases are going when McKinley got called back. Benji wasn’t far behind her.

Benji’s vitals were taken and we were led into exam room 8. One of our favorite nurses was waiting for us. She’d remembered to freshly draw Benji’s saline and had all of his accessing supplies ready. Banyan went to the cafeteria to buy his brother a hot chocolate–his idea–and Benji and I began our pre-accessing rituals. He didn’t stall a bit today. He had zero anxiety. He didn’t need his oils, and he asked the nurse to count to three this time before the needle pierced his skin. He squeezed his eyes and my hand tightly. Then we both looked at the clear tube as his port, which has served him so well, issued perfect blood return.

Dr. Oshrine is in such high demand these days, as word of his transition into more full time bone marrow transplant work has spread. Fortunately, today, we got the luck of the draw. I caught him up to speed on Benji’s symptoms throughout maintenance; his red, irritated feet, the positive signs that his neutrophils are working, his morning tummyaches, his perpetual runny nose. Overall I was happy to report that he was handling things beautifully, even staving off viruses his brother had brought home. We are still, more than seven months in, fever free. His cognitive function is clearly not impaired either. Dr. Oshrine was obviously pleased.

The bloodwork came back at the same time as Banyan and the hot chocolate. Benji’s numbers were right where they should be, but his absolute neutrophil count (ANC) is still high, over 3,000. It’s hard not to worry about this. It’s hard not to ask, repeatedly, “Does this mean the medicine isn’t suppressing his marrow enough?” I didn’t have to ask it. Dr. Oshrine saw it on my face. He told me, very clearly, that the most important piece of long term maintenance, the component that statistically prevents relapse the most, is consistent use of 6MP. High ANC does not correlate to relapse. He said he worries more about the kids whose counts are consistently low, because that means their chemo is frequently delayed, and the stop-and-start pattern of 6MP is not ideal. The language he uses is honest and evidence based and just compassionate enough to set me at ease, every single time.

Benjamin and Banyan were feeding off of each other’s hot chocolate energy and cracking jokes right and left. Dr. Oshrine and I held our conversation over loud brother laughter. There was good energy in the room. Because Benji’s ANC has been on the high side for two straight months, Dr. Oshrine increased his 6MP dose. It is now at its maximum, 150% of the recommended dosage for Benji’s body surface area. As with every increase, the hope is that the new dose will suppress Benji’s bone marrow just a little bit more, to hit that sweet spot of ANC between 500 and 1500 without causing his numbers to plummet and mandate a chemo hold.  His Methotrexate will remain at 125% (they only increase one at a time), and if his ANC remains high in July and August, that too will max out at 150%–and then there are no more increases. That’s it.

Dr. Oshrine also said that the pediatric genetic physician agreed that the research on the genetic testing we’d discussed was compelling enough to warrant ordering the test. They’ll work on insurance approval this month and add it to the labs for July. We will take that one step at a time. Genetic tests are wild. DNA is actually grown in dishes to see what genes develop. That can take a while.

The boys entertained each other until Benji’s Vincristine arrived. He winced at the taste of it as it started its trek through his veins, but dismissed the discomfort almost immediately. He had no further reaction from the medication, or the flushes, or the heparin that locked his line. When our nurse finally pulled the needle from his chest, Banyan looked at his brother with respect. “I don’t know how you do that, Benji. I wouldn’t survive.” It was a sweet moment. I waited until after dinner tonight to tell Banyan privately that yes, he absolutely would survive. He has more strength than he gives himself credit for.

We stopped by the Infusion Center for hugs and stopped by the first floor for a toy delivery, then we were out the door. Benji’s now-traditional post-chemo sushi lunch was acquired and we hit the highway, happy to learn that the Skyway had reopened just in time for our trip home.

We picked up Benji’s medicines at the pharmacy. He took his Methotrexate with dinner and started a new round of steroids tonight with his 6MP. There are ninety-one pills in his pill box for this week. Ninety-one. Still, I am constantly and painfully aware of how much smoother his path is than so many others.