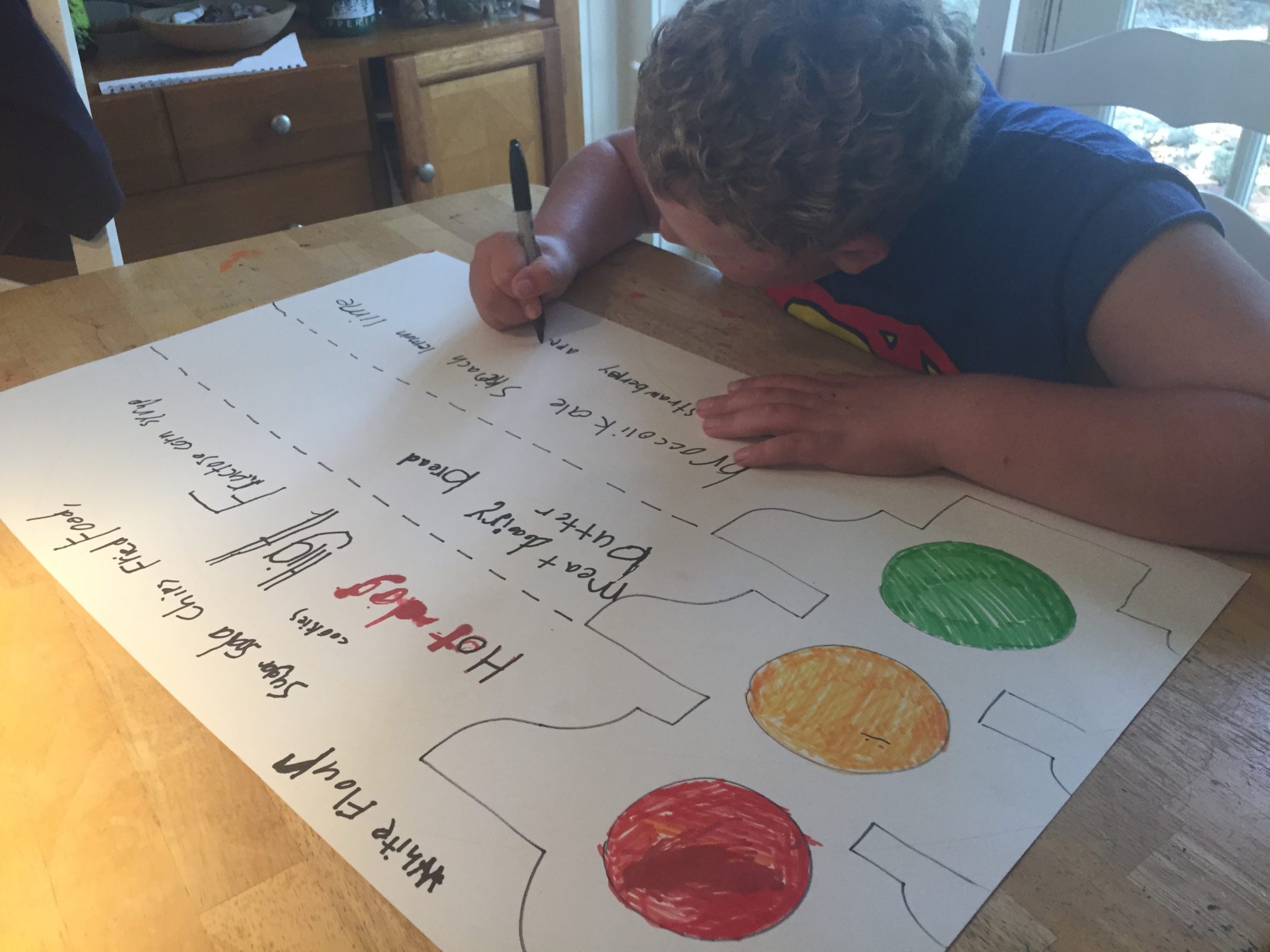 Benjamin stayed home from school today. He woke up super congested and coughing up a storm. He has been stuffy the last couple of mornings, but his congestion usually dissipates once he’s up and around; this morning felt different. Even though he wasn’t running a fever (and never did), I decided to keep him home. We had a colossal weekend. I thought he could use the day of rest, whether or not his symptoms turned into anything more.

True to form, by midmorning, Benjamin was feeling better. He started requesting many of the activities we used to do last spring, when we formed a creative homeschool rhythm. I pushed back against my guilt all day long. It kept nagging me that I had planned to work all day today. I answered the guilt: There is no more important job. Go away.

We painted portraits of each other. We did science projects together. We made a meal plan and talked about food choices. He asked me, “Why am I so much bigger than everyone else?” I told him that mostly, it was because of genetics. I reminded him of the story his Great Grandma Ruth often tells about Benji’s grandfather, who thought he might grow up to be a giant because he was bigger than his kindergarten teacher on the first day of school. I reminded him how big and strong his daddy and his brother are. I also told him that his body has gone through a monumental change these last fourteen months. He is taking medicines that make him feel hungry all the time. I told him that’s why it’s so important that when we do feel hungry, we are choosing foods that serve our bodies, rather than wear them down.

Another project was formed. I drew a stoplight, with red at the top, yellow in the middle, and green at the bottom. I told Benjamin to list foods that we should avoid or eat extremely infrequently (red), foods we should eat in moderation (yellow), and foods we should eat in abundance (green). He did a great job, and only needed help with the spelling. It showed me that he is really paying attention and knows what his body needs.

Banyan asked to have a friend over after school. I was happy to oblige. Benjamin was feeling much better then, and joined the bigger boys in a game of basketball. Soon, some neighbor kids came down to challenge them to a game of three-on-three. I cooked dinner to the sounds of six happy boys in my driveway.

Tomorrow I will catch up on the work I missed today, and tackle my list of things to research to add to Benji’s regimen. I’m behind on that list, and it is weighing on me. I don’t want to allow my days to get filled with too many other things that push research aside. It is my top priority, and I need to be prepared for next week’s clinic visit with the oncology team. A friend last night asked for my recommendations to extend to her friend who was just diagnosed with leukemia. I gave her a laundry list of things that might help at the beginning, but I thought of another big one today: the advice to pace yourself. This is not a sprint. It is a marathon.