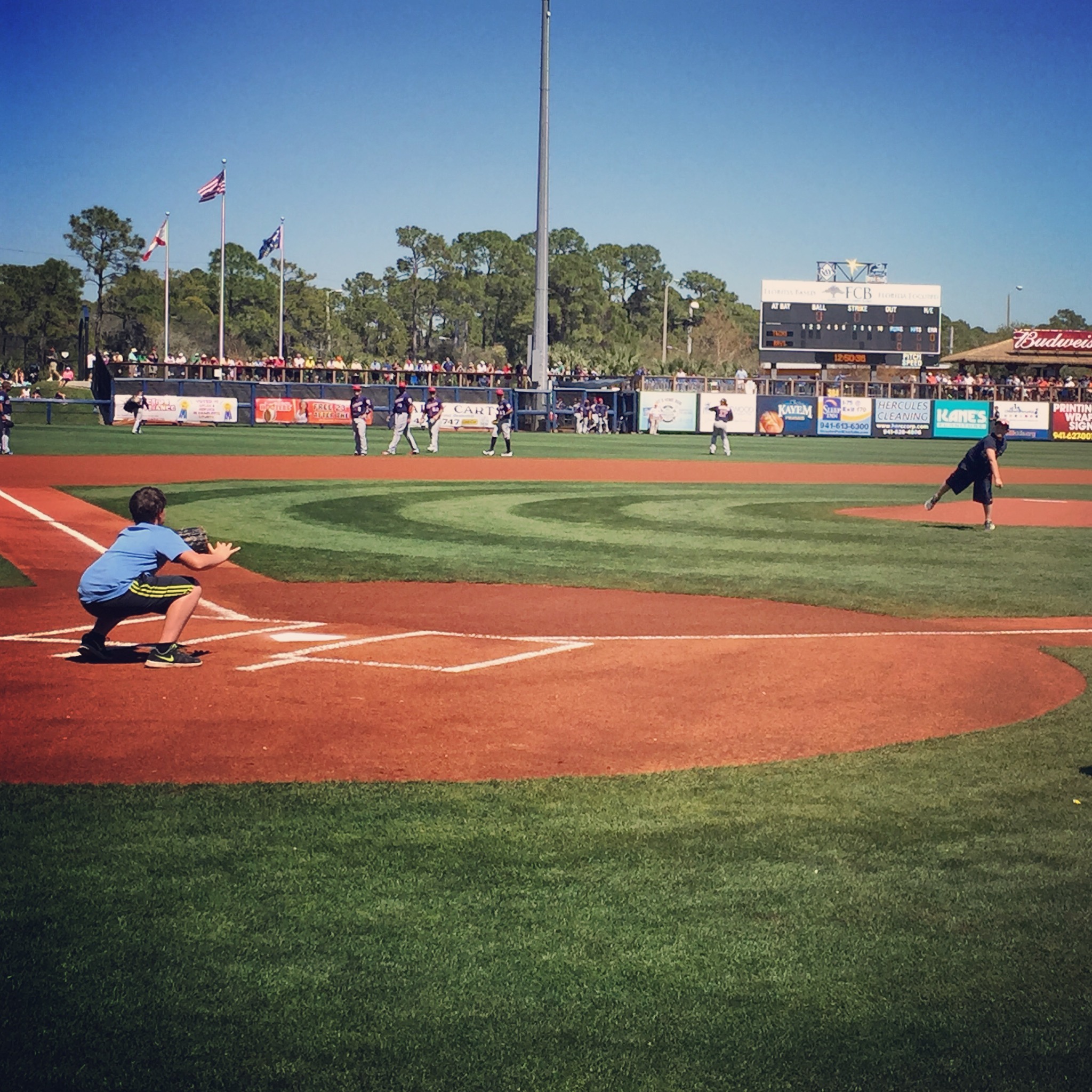 What an awesome day.

Baseball runs deep in my family, and spring training in southwest Florida goes back several generations. Today we were excited to catch our first spring training game of the season.

The Tampa Bay Rays baseball franchise has a great relationship with All Children’s Hospital. The hospital is adjacent to the Rays’ home stadium, and players are often seen walking the halls of the seventh floor, brightening patients’ days. Benjamin has been invited to several games and been given top notch treatment, including free tickets and access to the field before the games. We’ve got balls and hats signed by two of the boys’ three favorite players. When Benji was in the hospital for Methotrexate toxicity, he had to miss a game we had tickets for; instead, the Rays sent over a huge bag of gifts. We’ve always been fans, but now we feel personally connected to this bunch, and we were very excited to get out there today and see some of our favorites–and some newcomers to the squad.

Boy, were we in for a surprise.

Our new friend Robbie who works for the Rays had invited us down to their spring training complex. The boys were each welcomed to bring a friend. We knew we were getting our tickets comped, and we’d have access to the field to watch batting practice. But the generosity didn’t stop there. We got a text on our way down that we’d been given VIP parking. When we arrived, we were escorted onto the field as the Rays were taking batting practice. We watched some of our favorites take swings, and a manager threw the boys each a practice baseball to keep. Then Evan Longoria himself jogged over and handed each of the boys one of his own personal batting gloves, complete with red clay stains. My two have not taken their gloves off yet. Longo rounds out their triumvirate of superstars, joining Archer and Kiermeier on their collection shelves.

Robbie left to go get us our tickets, and we watched more players warm up. When he came back, he asked Benjamin if he’d like to throw out the first pitch in the game. Wow. Benjamin had a few questions–where would he stand, to whom would he throw (he requested Banyan), would he be on television…and the unspoken question he asked me with his eyes. Will they announce that I have leukemia?

Robbie was so intuitive. He took me aside and told me they could say whatever we wanted to introduce Benji. It happened to be Little League day down in Charlotte County, and there were two other kids throwing first pitches today, each representing their leagues. He said if Benjamin would rather, they could just introduce him as a representative of the Sarasota chapter. Benji really liked that idea. He didn’t want to be labeled today. He wanted to enjoy this, not as a kid who has cancer, but as a kid who loves baseball. I thoroughly appreciated Robbie’s kindness. The Rays weren’t doing all of this for a PR stunt. They were doing it to give Benjamin an experience he’ll never forget.

We were given a time to report back to the field for first pitch duty, leaving us an hour or so to grab lunch before the game. That’s when Robbie handed me the tickets, and told us where our seats were. Suite Five. Excuse me? He had arranged for us to have a private suite, fully catered, with our own balcony of seats directly behind home plate. The boys practically sprinted up the flights of stairs. It felt like Christmas morning when they walked in and saw the dishes full of hot dogs, pulled pork, chicken tenders and baked beans. There were drinks and chips and cookies everywhere. On the ledge overlooking the baseball field were two bobblehead dolls for each of them, and four bags of Big League Chew. These kids were on cloud nine.

With bellies full and cheeks hurting from smiling so much, we walked back down to the field. Banyan and Benjamin took a few practice throws on the warning track, and then it was time for the first pitch. Benjamin was the last of three boys to throw. The announcer said over the PA system, “And now, representing Sarasota Little League, Benji Gilkey! Alright Benji, bring it home.” And he did. A perfect strike from the pitcher’s mound, right to Banyan, who caught it beautifully. They ran back over to us with giant grins. We headed back upstairs to watch the Rays take on the Twins.

The weather could not have been more perfect for a day at the ball field.  We got to see a grand slam (albeit by the opposing team), lots of big hits, and a bottom of the ninth rally by our home team. We even had a visit by Raymond, the team mascot, in our suite. It was an absolutely amazing afternoon.

Sometimes mothers in my online group get their feathers ruffled when people tell them they are lucky for having certain experiences because their children have cancer. I understand where they are coming from; they feel defensive, because it was “luck” of a different kind that brought leukemia into our lives in the first place. Of course we would trade all of the field passes and luxury suites in the world for cancer to have bypassed our child. But I do feel lucky. Extremely lucky. We are surrounded by family and friends and strangers and community and baseball teams that want to make our boy feel special. They want to recognize and reward the strength he has displayed. We are lucky, to be sure, and we are so deeply grateful.