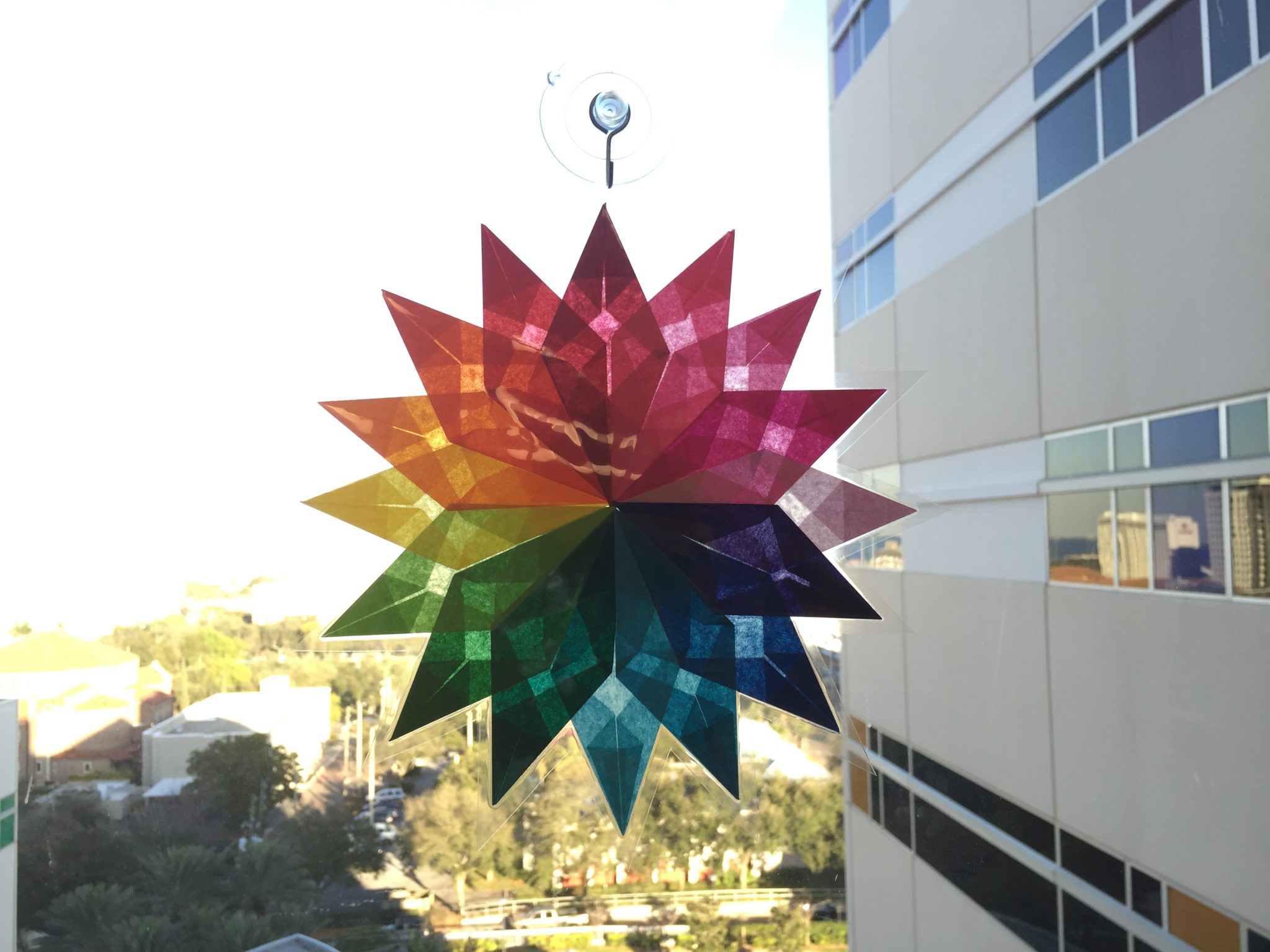 Today was a big day. A healing day.

This morning as I was getting the boys ready for school, I was having trouble staying present. My mind was drifting forward to this afternoon’s meeting at All Children’s. Ironically (or not, really), cancer talk occupied a much larger percentage of the morning conversation than usual. Benjamin said that his port was bothering him, because he had to wear a sweatshirt and the weight of the fabric was uncomfortable. He also said (kind of out of nowhere) that he hates 6MP. He wants to have ice cream at night sometimes, dammit, and 6MP is a major buzzkill. Also, this morning, I noticed two bruises on Banyan’s arm. Two bruises on a son’s arm two years ago caused zero panic. Now it sends my heart into my throat. I asked Banyan where they came from and examined the rest of his body. I reassured myself in every logical language I know. Banyan is fine. Benjamin picked up on my not-so-subtle concern and asked me when he had exhibited the most bruises. I told him, right before diagnosis, late December 2014. Next subject, please.

The “On This Day” feature on Facebook showed me a lovely-enough looking photograph of the boys from February 2014. I stared at Benjamin’s pale face. It is the earliest picture I’ve seen that made me stop and ask: Does he look sick here? Is it just me? Isn’t he pale? Could he have had leukemia since FEBRUARY? Certainly not. Right?

I texted Benjamin’s teacher (again) to let her know I’d be checking in on him, then Banyan and I went to his middle school. We enjoyed some really good talking time together last night and this morning. Ultimately, while I want to help him succeed in sixth grade math and in life, his happiness is much more important to me than a grade. After drop-off, I met a friend for coffee, one who is also a mental health counselor specializing in children. We talked about Banyan’s struggles. She was a breath of fresh air. She helped me with some language I could use to speak to him, and some big picture perspective on middle school in general. I left our coffee date feeling grateful and grounded.

For the rest of the day I prepared for our All Children’s meeting. I wasn’t nervous in the general sense, but my neck and back were a total wreck. Tight and tense and completely constricted. I sent a message to my dear friend and energy worker who reminded me to take deep breaths every few minutes. It helped. I packed my notes and photographs and studies and rainbow stars and toy donations. I wrapped the tiny baby hats I’d knitted for Dr. Oshrine’s forthcoming twin daughters. I went over the boys’ schedules with Kathy, who eagerly offered to do the pick up / chauffeur / guitar practice / homework routine. Michael came home early. Time to head for the Skyway.

The bald eagles and red-tailed hawks and ospreys were out en masse as we traveled north. We arrived at the hospital just in time. I read our letter aloud in the truck to prepare. I found my words slow to come out of my mouth. I had to pause a lot. I considered this a blessing. I would be thoughtful in my speech and careful in my listening.

I was relieved that Dr. Oshrine was the first to greet us. Soon, the Patient Safety Officer and Risk Manager joined him. We all entered the conference room. As the other two were preparing, I handed Dr. Oshrine the little bag containing the two knitted baby hats. He opened them and seemed so genuinely pleased. When I think of that man having children it makes me feel a sense of rightness in the world. The card we enclosed read, “For two lucky girls from one grateful family.” We will always be grateful.

The meeting began. At first, it had a slightly different vibe than the exuberantly grateful phone calls that preceded it. If I’m honest, it felt a little dictated by protocol. The Patient Safety Officer said things like, “Even knowing what we know now, we wouldn’t really have done anything differently.” These situations are the ones in which I offer deep thanks for my partner in life. I can do all the research and writing and preparation I want to, but Michael’s instincts and diplomacy are spot on, every time. He carefully replied, “Except test for Methotrexate levels and rescue with Leucovorin a week sooner, right?” Well, yes, they conceded. That point cannot be argued.

Once protocol softened into authenticity, things started to fall into place. We were assured that no other child presenting symptoms like Benjamin’s would go without a Methotrexate test. We discussed informed consent and nursing protocol and patient education. When Benjamin’s “atypical” skin reaction was addressed, I felt it appropriate to pull out the photographs I’d printed. The mood in the room changed, palpably. Gasps. Sympathetic sighs. We were told that Benjamin’s case had already been presented to the Children’s Oncology Group’s Methotrexate expert by two separate practitioners. Today’s team asked our permission to use the photographs for educational purposes at the National Cancer Institute and other appropriate forums. Of course, we said.

We talked about the lack of access to our core oncology team during our stay, and the fear that it had incited in us. Michael began to describe Benjamin’s period of withdrawal, an obvious byproduct of his unprecedented pain. Michael compared watching his son to watching me give birth to him. He said Benjamin (and me before him) had to just “go to a different place.” I’m not sure it’s a fair comparison; birth is a natural and rewarding process. Benjamin’s experience was far from natural. But the parallel is a valid one. Benjamin went away, into himself. I couldn’t look at Michael when he was describing this. He threatened to unleash my tears. I couldn’t look at Dr. Oshrine either. The gratitude for both of these men was too much. I just stared at the Patient Safety Officer. What will you do to make this right?

In addition to the promise that no child would ever present in this way again without a Methotrexate level drawn, we were assured that “customer relations” training and primary care were being addressed by the hospital as a whole. Finally, I was offered a position on the Patient Advocacy Advisory Council, to help make recommendations to the hospital on behalf of other patients. This, I have to consider. But I have a feeling I will say yes. One day.

We left the conference room with Dr. Oshrine, who immediately seemed more candid outside of closed doors. He said that the larger oncology group meeting that had ensued as a result of my letter was extremely educational. Everyone seemed to take the letter in the spirit in which it was written, he said. That meant a lot to me. Everyone agrees that Benjamin is a very special child. What made him react in this way to this medicine? This is a mystery. The oncology team predicts it may be another decade or two before they see another case quite like his. But when they do, they’ll be ready. No other child will experience Methotrexate toxicity at All Children’s Hospital–and possibly at any COG dictated hospital–and have it go undiagnosed. Of that, I feel confident. I also gave Dr. Oshrine the two studies on cafe-au-lait spots I’d found and hope to hear his analysis next week, when Benjamin is due for his next lumbar puncture and intravenous chemo.

Before we left All Children’s Hospital, we collected the bin full of toys and books from Michael’s truck and deposited it in the collection box in the lobby. We also went up to the seventh floor and delivered a new batch of Rainbow Stars. These deposits lightened our load, significantly. By the time we were on the southbound Skyway, my neck and back felt totally fine.

Michael and I enjoyed a debriefing beer while Kathy fed the boys dinner, then we all reconvened on Clematis Street. I felt so grateful to see my children. Banyan told us he’d nearly aced his practice test in math. We knew you could do it. And Benjamin asked us immediately, “How did it go?” Well, son. You kind of changed the world today. No big deal.