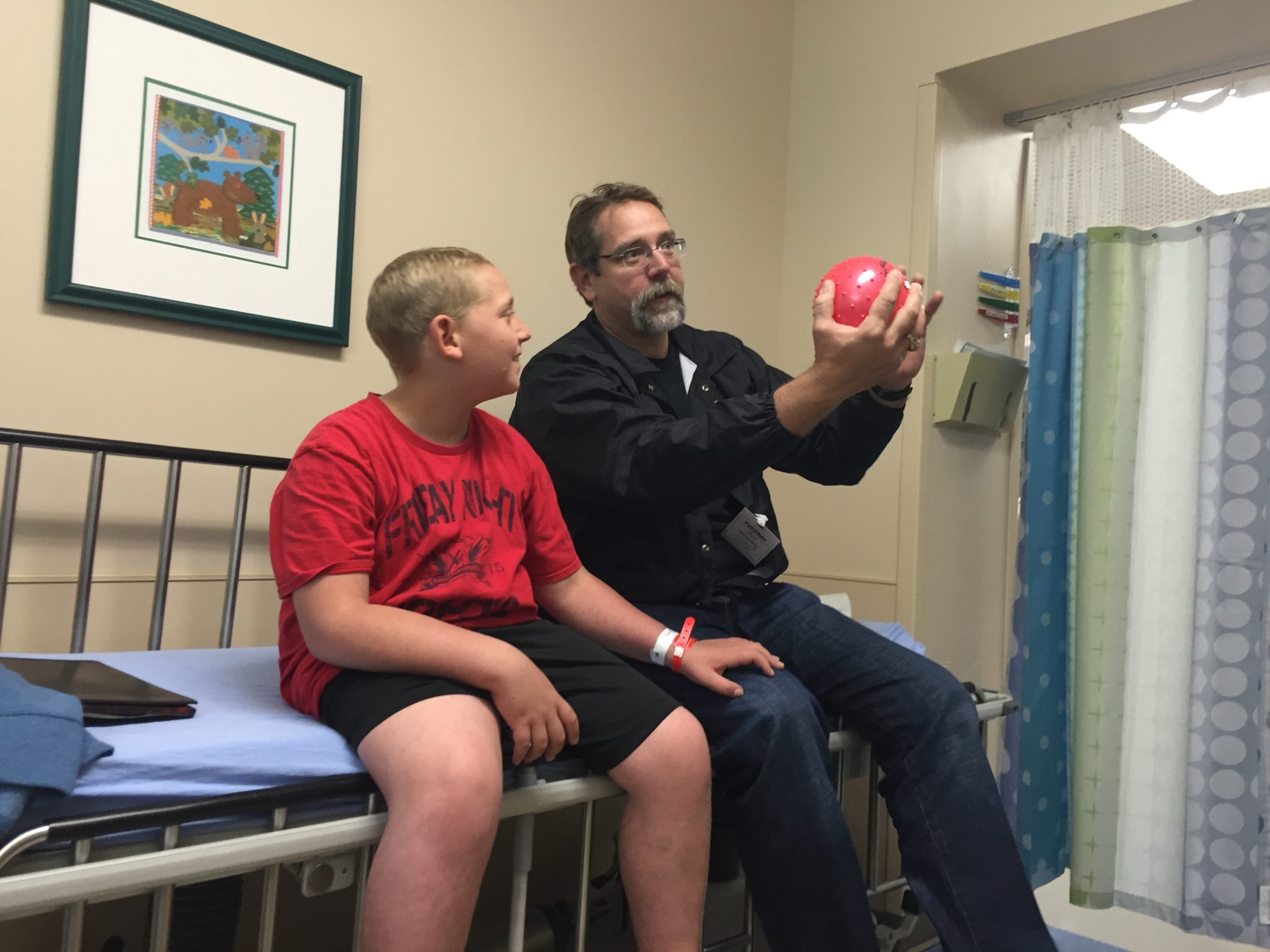 It has been a long day, but here, at its end, gratitude is finding me easily.

Benjamin went to sleep last night complaining of throat pain. At 3am, he woke me up crying, coughing, and clutching his throat. We assumed our familiar late night bathroom positions, he in the tub and I on the rug next to him. He snuggled up in our bed afterward, and I struggled with sleep, wondering if today’s chemo would be held, or if he would develop a fever that would send us right up to the seventh floor.

At sunrise, we bundled Banyan up and sent him down the street to our neighbor’s house to catch a ride to school. We put numbing cream on Benjamin’s port and loaded up our questions, our paperwork, our oils, and our distractions into Michael’s truck. No binder though. The Binder stayed home.

It was an extremely busy day in the Hematology/Oncology clinic, since yesterday was a holiday. We saw several bone marrow transplant patients come in and be seen before Benjamin (and for good reason). Finally we were called back. My heart was beating a little more quickly than usual. I haven’t seen Benjamin’s care team since I sent the letter. I had no need to be nervous; it wasn’t mentioned, and no one treated us any differently. The first doctor I saw in the halls was Dr. Moore, who gave us a warm smile and a wave. No cold shoulder there. Our favorite clinic nurse came in to greet Benjamin, ask all of the usual questions, and access his port.

I’m so thankful Michael finds a way to join us on the days Benjamin has lumbar punctures. He is able to help me support Benjamin through his anxiety (and procrastination) while getting accessed, and while going through all of the less pleasant things about a day of treatment. Our boy powered through and did a beautiful job. He helped our nurse draw his blood into two little vials. Just as she was walking out to take the samples to the lab, Dr. Grana was walking in.

Dr. Grana had a student with her. I was grateful to feel no tension in the wake of the letter, but instead feel a trace of that maternal energy that has drawn me to her since we first met. She had a hand on Benjamin nearly the whole time she was in the exam room. I went over a few minor concerns with her and she examined him thoroughly. She asked him to walk on tiptoes and heels. We talked about Vitamin D and calcium for bone strength. I asked about beta glucans and krill oil and the theory I’d read about the body’s immune system being paramount after treatment, to gobble up any wayward replicating leukemia cells. She seemed to be on board with this theory. She was honest, kind of saying that this differential between strong and weak immune systems is the missing link to successful treatment. She also said that most immune-enhancing supplements, in her opinion, only exist to take our money. But she completely agreed about the power of nutrition.

Benjamin’s numbers came back as we predicted. His absolute neutrophil count (ANC) was quite high, no doubt a product of this sore throat he’s fighting. His platelets, hemoglobin and creatinine all look super. His liver enzymes are also high, which we expected; his nightly 6MP is hepatotoxic. It is rare to make it through maintenance without a delay due to liver toxicity. We are doing the best we can to prevent that with weekly milk thistle, which we will now increase to a daily dose. Fortunately, the numbers aren’t high enough for a hold on chemotherapy.

So, with Benjamin’s blood and vital signs reported, he was all cleared to begin his second cycle of long term maintenance. The dosages of his medicines will increase, as his body has grown. We waited a while for our nurse to bring in Benjamin’s anti-emetic and his intravenous Vincristine. Michael and Benjamin played with the over-the-door basketball hoop that Child Life brought in for Benji, and I knitted, and knitted, and knitted. Soon, Benjamin was hooked up to the clear liquid, holding his nose intermittently, powering through.

We made our next appointment and Dr. Grana signed the paperwork we need for the school district to continue Benjamin’s Individualized Education Plan. We gathered our things and walked down to the Special Procedures Unit. There, we waited. And waited. And waited. We learned that Benjamin was the last procedure of the day, and that there were seven kids from the Hematology/Oncology Department alone in the SPU today. This is unheard of. It was after 3pm when they finally came to wheel Benjamin into the operating room. He was feeling pretty badly by this point. His nausea and his sore throat were both worsening, and it was approaching 20 hours since he’d eaten. But again, he powered through. He kissed his daddy goodbye, and I held his hand as his favorite SPU nurse joked with him down the cold hallway.

Dr. Grana had told us that Dr. Oshrine would be doing Benjamin’s lumbar puncture today, so seeing him in the operating room wasn’t a surprise. This knowledge didn’t diminish my level of gratitude, however, as I placed our son in his hands. Benjamin looked nervous, but did not fidget or complain. I know he felt safe too. I stroked my boy’s golden hair and kissed his head fiercely as the milky white propofol did its work. Take a rest. Have a beautiful dream. We’ll be here when you wake up. When I said thank you to Dr. Oshrine as I left, the words were filled to the brim.

Michael and I grabbed a coffee and went to the pharmacy to retrieve Benjamin’s newest rounds of prescriptions. We filled out some financial paperwork and got all business-y things taken care of. We talked. We exhaled. We texted with Kathy and Gana and Banyan and made sure Banyan knew his marching orders, as the busy day meant we wouldn’t be home in time to pick him up from school. We are so grateful for our family who takes care of our eldest at a moment’s notice, without hesitation. We don’t have to scramble to find a safe loving place for him. It is just there.

When the buzzer went off, we walked back to our son, who was awake, and very ready to go home. We are always leery of letting him sit up right away. We know that spinal headaches from intrathecal chemotherapy can happen frequently within that first hour, and we like him to stay horizontal. But Benjamin was ready. He was begging for a wheelchair. Our nurse vibed the situation and took her time with the discharge paperwork, to afford him a few more precious horizontal moments. She gave me the exact moment of his lumbar puncture so I can administer his rescue medicine, Leucovorin, at 48 and 60 hours post-administration. I requested the dosage of his propofol and was pleased to know that Benjamin got a conservative amount (hence his eagerness to flee the scene). We helped him into his wheelchair and headed for the parking garage, and for home.

All night, I have been feeling the gratitude, big time. We truly have every single thing we need. Banyan was dropped off just as we pulled in. Benjamin was able to take a soothing detoxifying bath and rest with a castor oil pack within the first hour of being home. We shared a big, warm pot of bone broth soup with healthy goodies thrown in for dinner. We all worked together to be sure Benjamin was hydrated and happy. I split and sorted Benjamin’s new healing pills into his pill box, and gave him the first of his new cycle (including a new steroid pulse) as he drifted off to sleep, inhaling his respiratory blend of essential oils in his diffuser.

We have all that we need. I am acutely aware tonight of our privilege and good fortune. I know that so many caregivers struggle without a partner, or a family, or a community, or resources, or research, or comforts, or a positive prognosis to carry them through. We have all of these things and so much more.