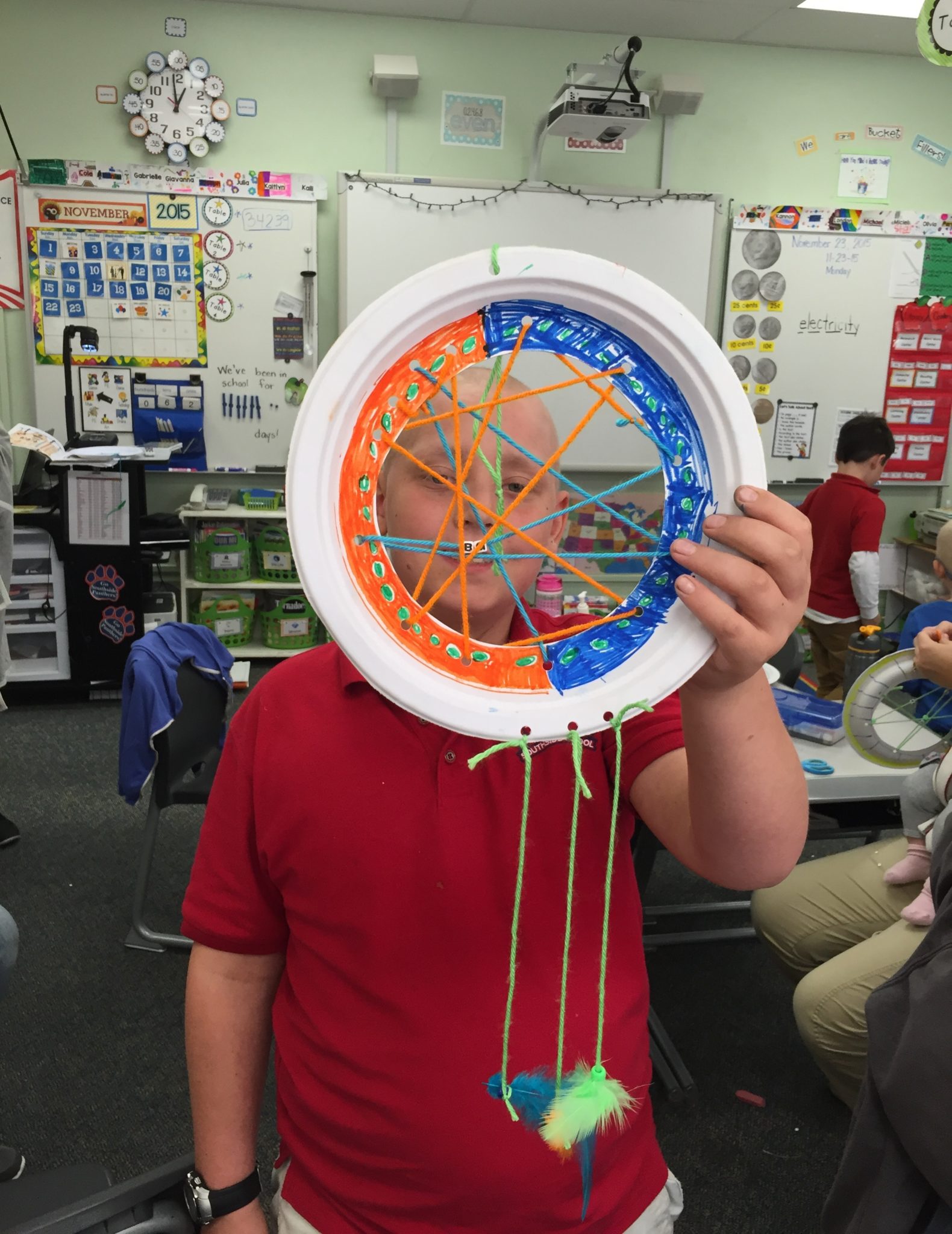 Benji woke up thinking it was Tuesday. He didn’t complain, he just padded into our room with a big sigh, and asked what time we had to leave for the hospital. When I told him it was a school day and he didn’t have to get his lumbar puncture until tomorrow, he was so genuinely happy. “That means I can eat breakfast!” Such a simple thing.

After I took the boys to school, I met Michael at the office and dropped my car off to be sure it’s ready to head over the Skyway tomorrow. A few errands later and it was time to meet Benjamin in his classroom for Thanksgiving crafts. Four other mothers and I helped the second graders make dream catchers and edible turkeys. It was one of the better class activities I’ve been to, because the kids weren’t rushed. No foam stickers or pre-packaged assembly. These dream catchers were expressions of each child’s creativity.

While I was helping Benji string beads and feathers onto his masterpiece, my phone rang. All Children’s. I stepped outside and took the call; it was the surgery unit doing their routine pre-registration for Benji’s lumbar puncture procedure tomorrow. I answered the same questions I always answer. The woman on the other end of the phone spoke painfully slowly. I said “yes” and “no” like a robot while watching Benji working happily with his friends through the classroom window. I felt an angry disconnect between these two experiences. Of course I’m grateful for the treatment Benji will receive tomorrow. But at that moment, our absence from the clinic was not making my heart grow fonder.

We finished the craftiness and I kissed Benji goodbye so he could finish his schoolday. I began packing for our Thanksgiving trip to Georgia, which is at once super exciting and a little overwhelming, since we haven’t been out of town for any length of time in a year. I scooped up the boys a couple of hours later. Benji told me that he saw a friend he hadn’t seen in a while after school. The friend’s little brother was with him. The little brother asked Benji, “Why did you have a heart attack?” Benji laughed. I asked him what he said to correct him. He told me that he said he had gotten a lot of bruises, so his mom and dad took him to the hospital and that’s when they found out he had cancer. Perfect answer. He was totally calm and content, and moved on to “What’s for snack?”

Tomorrow we will wake up and drive over the Skyway. Michael will meet us there after getting Banyan off to school and doing some last minute Georgia preparation. Benji will have his port accessed and his blood drawn. Provided the numbers from the lab are agreeable (which we expect), he’ll get his monthly dose of intravenous vincristine, then head down to the special procedures unit for his lumbar puncture with intrathecal methotrexate. We will get new prescriptions of 6MP, oral methotrexate, and the steroid prednisone, which he’ll begin again tomorrow.

For the last hour and a half I have been participating in a webinar from KICKcanCER. I have been taking notes like mad about nutrition, fats, glucose, proteins, amino acids, biotherapeutic drainage, new (to me) detoxification techniques, juicing, and essential oils. I have added many new tools to my arsenal to help Benjamin’s body detoxify and support his treatment. Over dinner tonight, I told him I’d be boosting his nutrition plan, and that I needed him to cooperate with me. We talked in plain language about his health and he seemed completely agreeable. I am excited to get started. The first step: clean, fresh air, the scent of Georgia pines, and a bright full moon over a campfire.