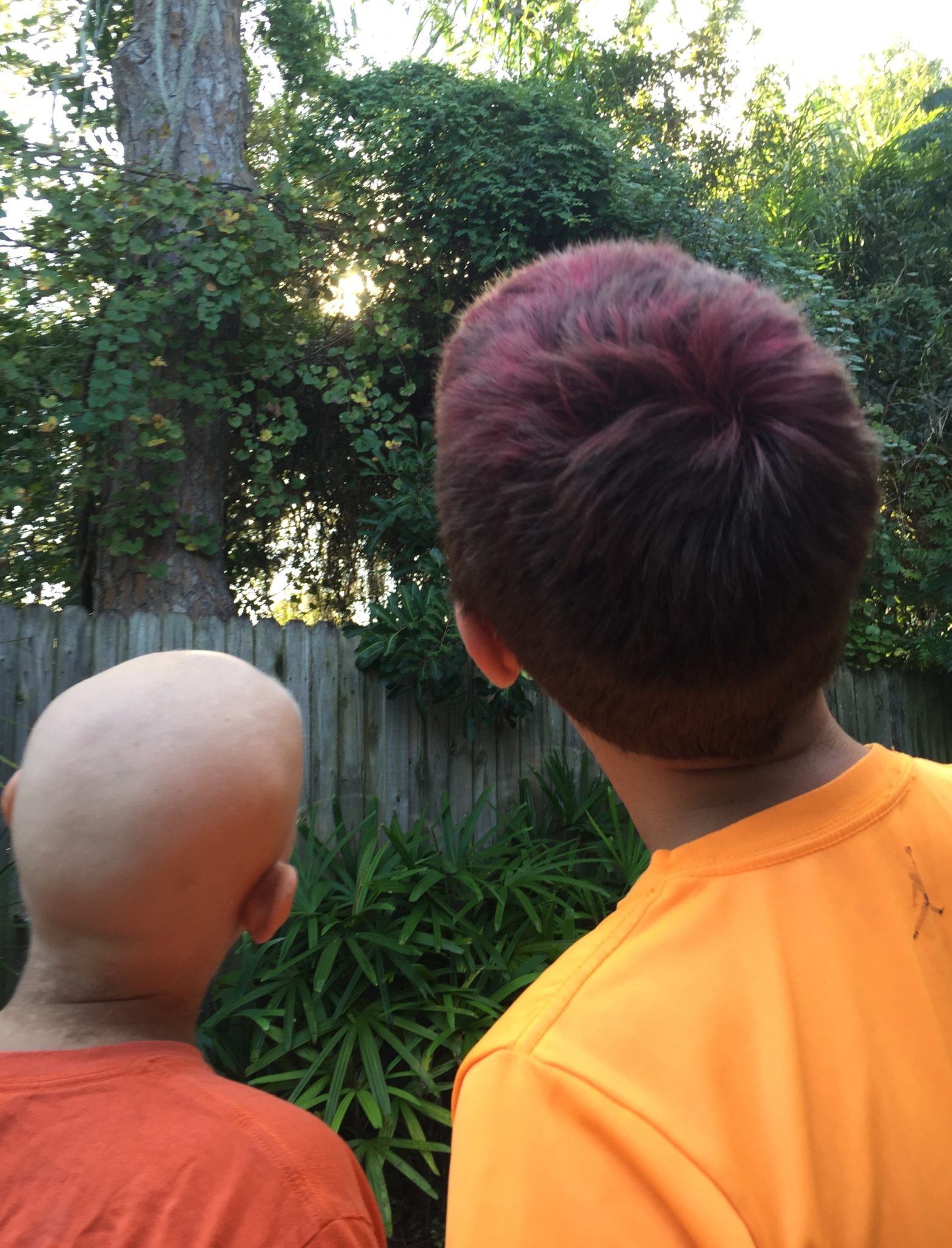 The boys had no school today. I was hoping that would mean sleeping in a little, but it was not to be. Because Benji’s body endured the Methotrexate toxicity, every lumbar puncture from now until the end of treatment will be followed by two doses of Leucovorin, 48 and 60 hours after the procedure; Hour 60 was at 3am this morning. I woke up every half hour preceding my alarm clock, fearful I’d miss the dose. After I gave it to him, I continued to wake hourly until Michael left for work. Benji woke up holding his belly just moments later. The steroids have definitely kicked his hunger into high gear.

Our neighbors called us after Benji had an omelette to tell us that there was a Great Horned Owl in their pine tree. We rushed over with our binoculars and spent nearly and hour and a half watching one of the most gorgeous creatures I’ve ever seen. He stayed in that tree until 7pm this evening. We checked on him often. His patience astounded me. I know that owls are nocturnal, but he didn’t seem to catch a whole lot of sleep. He’d doze off for a while, then a noisy blue jay or mockingbird would land on a branch nearby and he’d turn his giant head around to inspect his company. The noise of the suburb below didn’t help. He obviously got the rest he needed. When night fell, he flew to the highest bough, plotted his course, and took off on giant, graceful wings.

Benji’s baseball team held their first practice of the week today. We had planned to go, but at the mention of it today, Benji grew fearful. His body betrays him when he wants to run. His legs are still sore, though he is recovering from his hospitalization more each day. We encouraged him to go and just hit the ball and play catch with his teammates, but there was an element of embarrassment that was hard to shake. We didn’t push the issue. I know how badly he wants to play. He’ll let us know when it’s time.

Between owl watching sessions, we ran errands and constructed Halloween costumes, and the boys played with friends in this lovely October weather. When it was time for Michael to get home, Benji grew teary. He was hungry, and he didn’t want to wait any longer for dinner. I’d planned a big pot of chili, but he asked to go to a neighborhood restaurant instead. We obliged. We are trying so hard to make him happy. By the time we got there, his hunger was overwhelming him to the point of indecision, weeping, and tantrum like behavior. Michael ordered him an appetizer and he wouldn’t eat it. We had to leave the restaurant.

While it’s true that Benjamin needs to learn to cope with the radical swings his medicines send him on, none of us can truly know how he feels. He is, after all, only seven. I don’t think he has learned the words yet for the messages his body sends him while he’s on these steroids. After much negotiation, I went to the grocery store and got a selection of ready-to-eat foods I know he likes. His belly is full, and he is resting now, watching a movie with Banyan and Michael.

The “restaurant incident” spawned a lot of tension in our house tonight. This is all really hard sometimes. There are so many big emotions. Sometimes, as much as I try, I don’t have the words yet to describe these feelings either. I wish I could be more like our winged visitor: patient, graceful, replenished in small doses, and trusting in the perfect timing of the world.