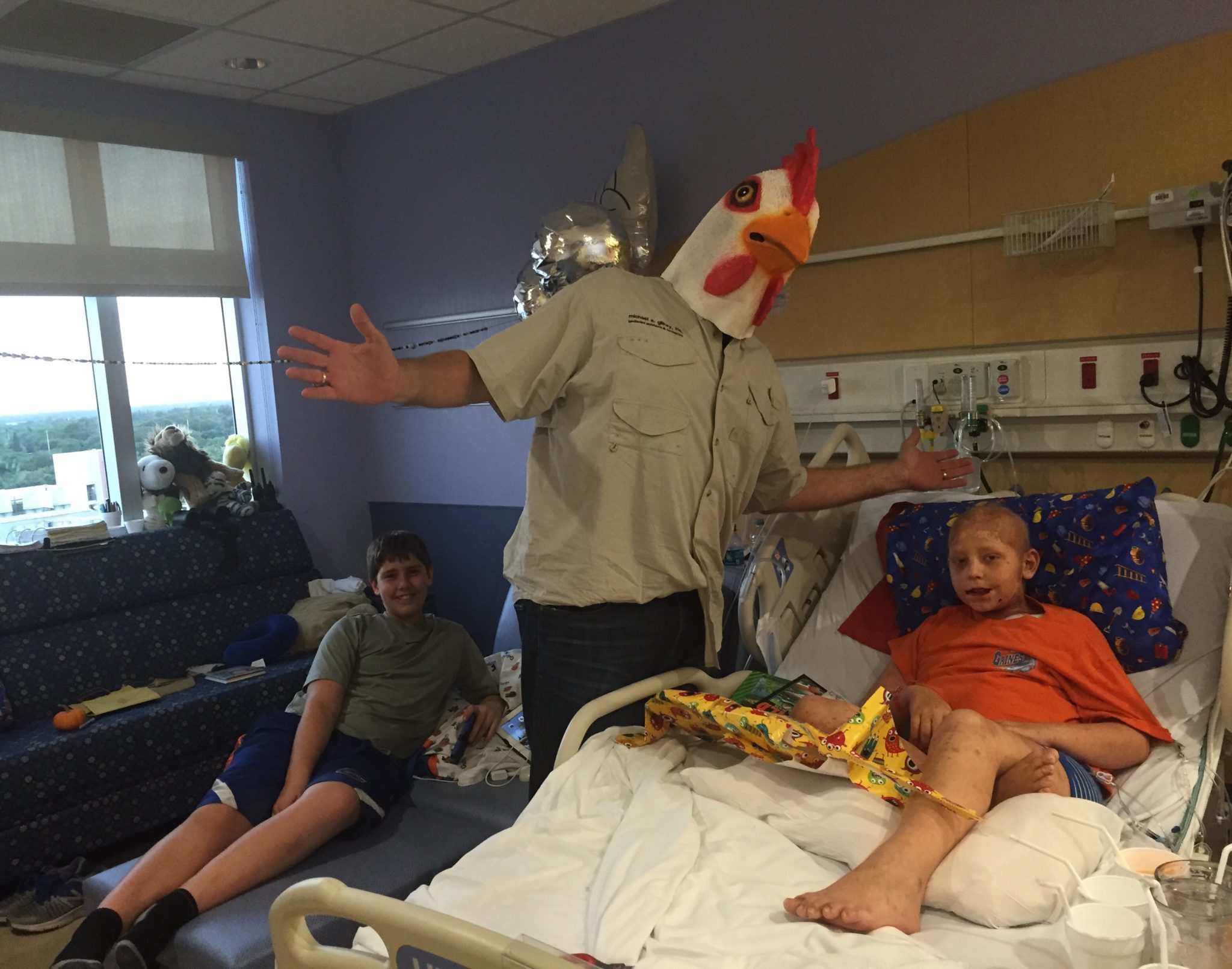 We had a very sleepy morning here on the seventh floor. We both slept well last night but woke up frequently. Our night nurse was less experienced than her colleagues, and Benji’s morning blood draw took longer than usual. By the time we woke up for the day and completed Benji’s skin, mouth, and eye care routine, he was ready for a nap.

Benji’s skin looks so much better today. We’ve been dry brushing his molting skin and following it with a layer of saturating Aquafor. It’s working. The area around his chest looks much better as well. His morning labs showed more progress. His liver enzyme levels are much lower than they were earlier in the week. His absolute neutrophil count (ANC) remains zero, but his white blood cells continue to increase. The most encouraging number on Benji’s morning lab report was his creatinine, which is down to 1.08. His kidneys were functioning at 18% when we were admitted; now, they operate at 55%.

Benji napped through his visits from Nephrology, Opthalmology, and Infectious Disease, all happy with what they saw. I spent the morning updating Benji’s Beads of Courage with the new glass beads he’s earned since our last hospital stay in June. Each color represents a different act of bravery; days of chemotherapy, lumbar punctures, blood transfusions, shots, dressing changes, nights in the hospital, etc. I added Benji’s new beads to his strand and hung them. They span the length of the room.

I started a new chapter book with Benji when he woke up. It didn’t last long. He seemed so down. His mouth really hurt today. As I was reading to him, he was busy peeling the skin from his fingers. He asked me to stop reading and get him some gauze to spit into. His mouth was bleeding and he was clearly trying to get something out. I saw something whitish come out on the gauze and realized what was happening. His tongue was peeling.

I was thankful that Dr. Grana chose that moment to come and examine Benji. His platelet count was on the cusp of their transfusion parameters this morning, and with his mouth exfoliating the way it was, I was feeling unsure. She decided to give him a small platelet boost, about half the amount he is normally given. We also talked about Benji’s pain management. He hasn’t pressed his PCA button in two days. Dr. Grana decided it was time to begin reducing his dose. Just before she left, Benji asked her, “When is the fastest I can go home?” Dr. Grana surprised both of us with her answer. She said she can’t promise anything, but if she had to guess, she’d say we could go home as early as next week. Benji’s smile through bleeding lips was absolutely precious.

Michael and Banyan arrived as Benji’s platelet infusion was finishing. They came bearing many gifts; three sweet families sent us care packages today. I am learning so much about human kindness this year, and its many colorful forms. Michael brought Benji even more assorted waters to choose from, and some special things from the toy store, including some prank material for the nurses (there may or may not be a giant chicken head on top of Benji’s IV pole right now).

Banyan just got a brand new book from his Grammy, and he decided to have a bunch of his friends sign it with him so he could give it to Benji. He was so thoughtful. He told Benji immediately how much better he looks today. Benji showed more spark while Banyan was here than I’ve seen in weeks. Banyan had grabbed a handful of marshmallows–one of the many, many soft foods that has been offered to Benji–and Benji said, “Can I have one?” We all smiled big, thinking Benji’s appeite had been piqued. Banyan handed him one. “Thanks! Now I can chuck it at your face,” said Benji. Laughter filled our seventh floor room.

I think we have reached the final stages of Benji’s molting process. His pain is dissipating and his fevers are low. His blood cultures remain negative. He just needs three more things to happen: normal kidney function, a healthy ANC, and the ability to eat. He gave us one smile yesterday and two smiles today. Things are definitely moving in the right direction.