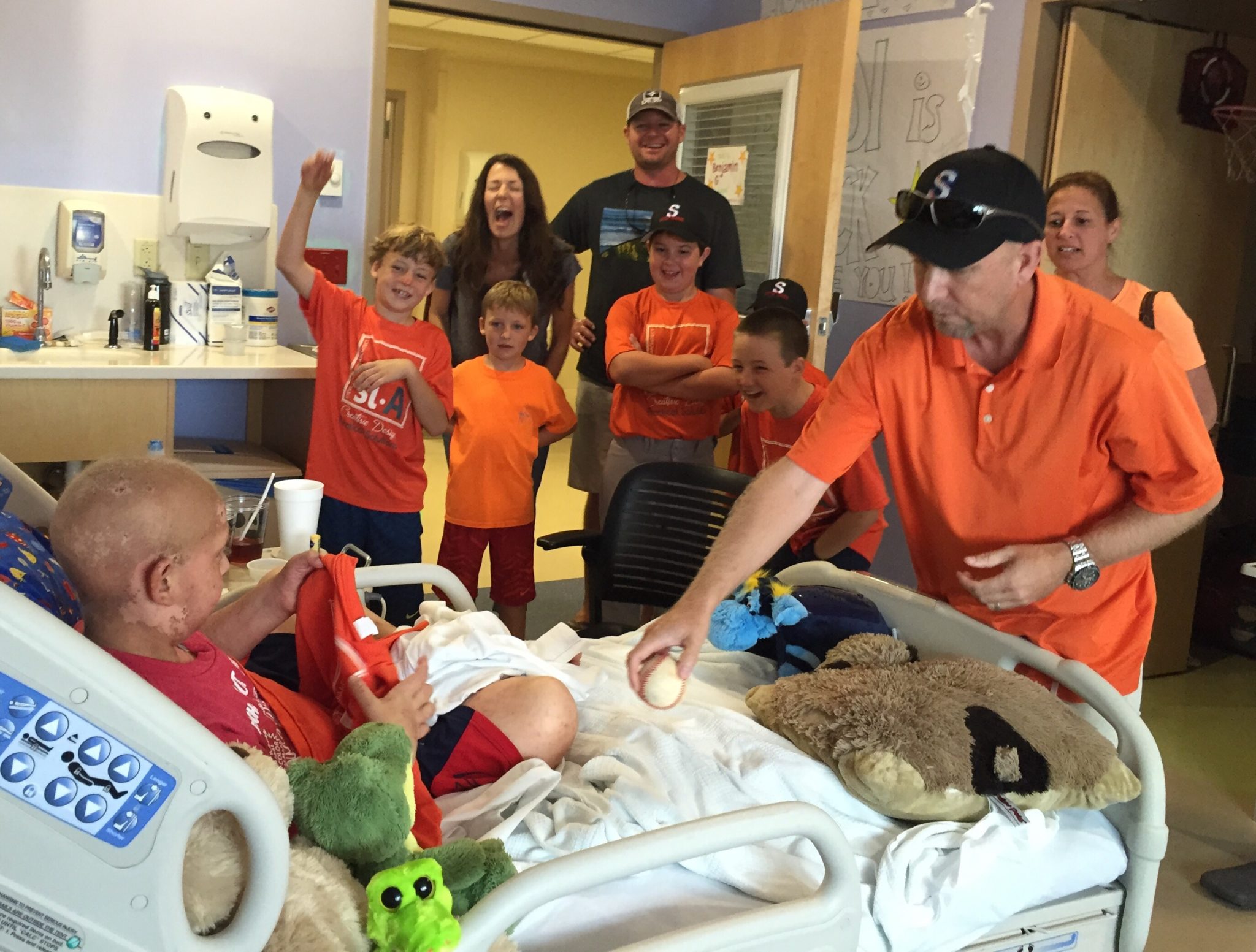 This roller coaster hasn’t come to a halt just yet. My intentions are being refocused tonight. I cannot grow complacent. It isn’t enough to just wait to be discharged. We have to build Benjamin’s body back slowly, safely, and most importantly, without infection.

When the night nurse came to get Benji’s weight last night, it had gone down again. This is to be expected, of course; he hasn’t eaten a meal in sixteen days now. He’s lost about ten pounds since we got here. When the nurse told me the number in kilograms, Benji asked me, “Do we want that number to go up or down?”

Benji’s question showed me how much he is paying attention. He knows there are parameters now for his discharge, and many of them are numeric. I explained to him that his weight didn’t matter exactly, but rather the focus was on helping his body learn to eat again. So later in the night, when Benji was shaking from pain for the first time in days and not pushing his PCA button, I realized that he’s heard me tell various doctors and family members that he hasn’t needed pain relief for a while. I am sure there was hope, if not pride, in my voice. I needed to correct this train of thought, and quickly.

I told Benji that there was no need for him to be in pain, and that the button had nothing to do with us going home or how strong he was. I told him for the zillionth time this year how adept he is at taking care of his body and knowing what it needs. I told him to trust his inner voice. I went to the restroom, and when I came out, he said, “I pushed it, Mama.” I praised his judgment and kissed him goodnight.

Benji’s morning labs were anticlimactic. His creatinine only dipped from 1.08 to 1.07, stalling the healthy downward trend we’ve been seeing. His platelets got just a tiny boost from yesterday’s transfusion, and as a result, his lips and nose were tinted with blood most of the day. His tongue was peeling yesterday; today, his lips followed.

We have developed a morning body care ritual on the couch, in the sunshine. It is exhausting for Benji but it’s helping him heal, so he sits through it with me. I give him his leukemic mouthwash to numb his painful mouth and throat, and his carafate to coat his belly. I put eye drops in his eyes to protect his conjunctiva from suffering the same fate as his other mucosa. I use a dry washcloth to help him slough off the skin that has molted in the night, and I hydrate his sweet new skin.

The weekend oncologist is Dr. Ayala. I’d never met her before today and I liked her right away. We talked about Benji’s pain, and the fever that has returned with it. We talked about his need for platelets. She watched Benji’s body in places where it was bleeding. She knows he is due for a port reaccess tomorrow, and decided to minimize the risk of transfusion with careful timing. We will likely transfuse in the morning.

Michael and Banyan came to spend the morning with us before Banyan’s afternoon basketball game. While Benji napped, I left him and The Binder in Michael’s capable hands and took Banyan for a walk outside. It was the first breath of daylight I’ve had in two weeks. Banyan and I laughed nearly the whole time as we tossed his football while we walked, finding little patches of green on the nearby USF campus. There was an occasional hint of fall in the midday air.

Just after Michael and Banyan left, Benji’s fever spiked over 102F for the first time in days. Protocol instructed our nurse to draw a blood culture to rule out bacterial infection. Protocol also dictates that before that culture comes back, Benji’s prophylactic antibiotic must be replaced with something that offers a different spectrum of coverage. Today he was switched to Maropenim, his fifth antibiotic since we arrived. This system bothers me, but I understand the logic behind it. We will have to repair a very shredded gut microbe when this is over.

A dose of Tylenol helped, and Benji took a brief afternoon nap. When he woke up, he had a big surprise. He was visited by two coaches and five players from his little league team, all wearing their jerseys and excited to present Benji with his. They have played their first three games since Benji was admitted, and they wanted him to know he’s still a part of the team. They were excited to fill him in on grand slams and pitch counts, though their little eyes were wide when they walked through our door. Benji’s head coach, a three time childhood cancer survivor, said such kind things about his own experience at All Children’s many years ago, and about Benjamin’s tenacious attitude. He asked about the families we’ve met. He says we are part of an elite club now. He said it with pride. Benji wasn’t up for a long visit, but his smile was the biggest I’ve seen yet.

Benji wanted to sleep again when his team left the seventh floor. His tummy hurt. His throat hurt. His skin hurt. Michael and Banyan returned after the basketball game, and Benji stayed asleep nearly the whole time they were here. Now, he has developed a very wet cough, his fever has spiked again, and he just vomited for the first time in days. Clearly, he is peeling on the inside, too. His mucositis could be solely responsible for all of these symptoms. That is my fervent hope tonight.