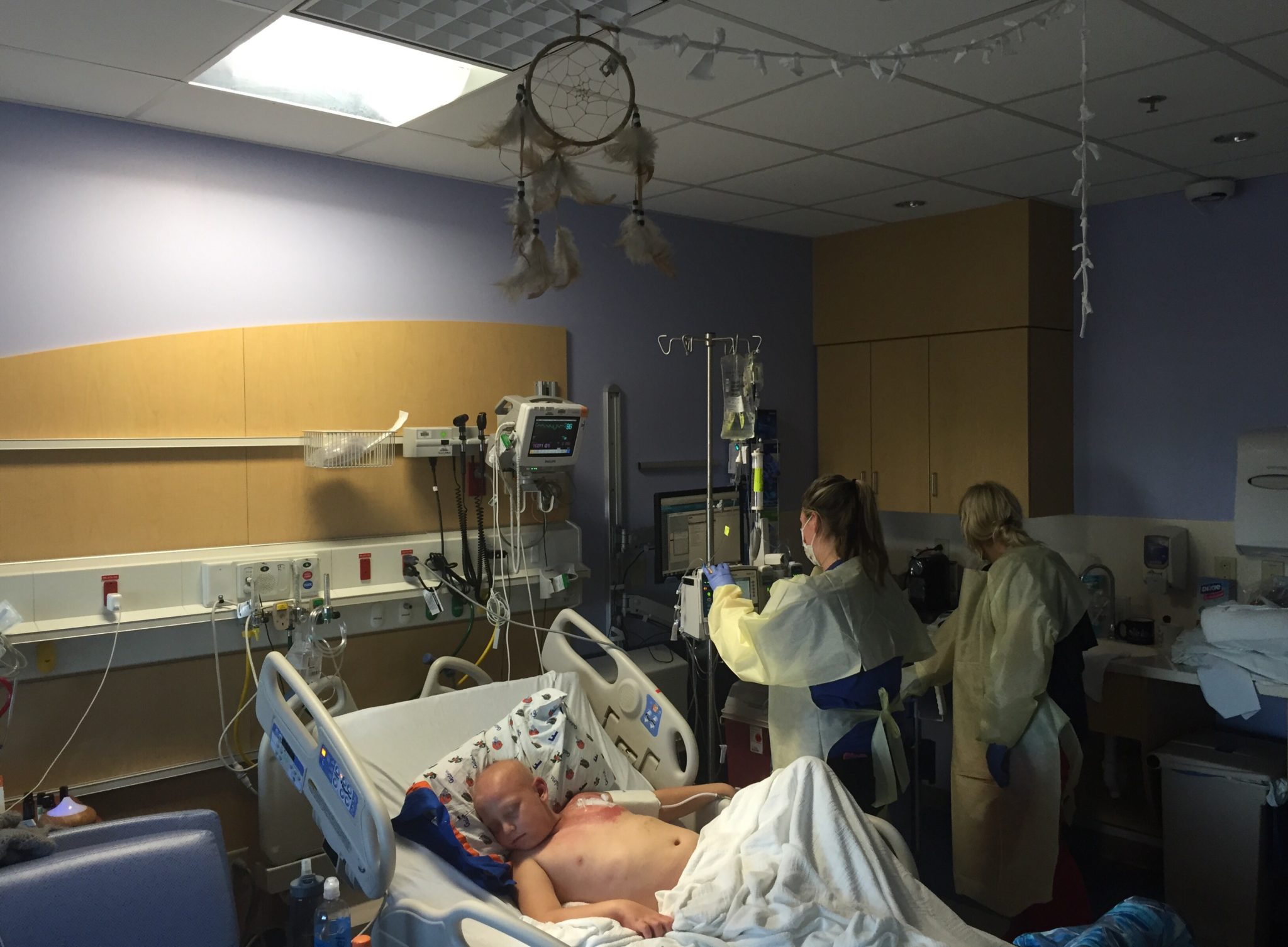 Today has been an absolute roller coaster. There have been many questions, many more tests, and moments of unprecedented fear. We are learning. When the body fights to rid itself of enemies, they must exit somehow–and that is what Benji has been experiencing, on all fronts. His mouth, his throat, his entire gastrointestinal tract and his skin are all working to push out the apparent virus that has been attacking him. On top of all of that was a reaction to the very thing that is supposed to pull him out of this mess. It’s time for this kid to catch a break.

Benji had a really rough time last night, and we hardly slept. He was up for baths often. Most of his pain now is coming from his throat and the reaction to the tape on chest, but he still has pain in his belly, with diarrhea and occasional vomiting. Our longest stretch of sleep was from 8am to 10am or so. We were woken up by Dr. Mayer and Isaac, a very kind physician’s assistant, during their morning rounds.

Dr. Mayer began by saying that while everyone is now sure that what Benji is fighting is viral, she wants a name. She wants to know exactly what has caused him such a hard time this week. She ordered more tests because of the new presentation of his back rash and mouth sores. He may not have mucositis after all, but she’s pretty sure he does have thrush–another byproduct of the imbalance in his gut–so we began treating for that today. Dr. Mayer also wanted to test Benji’s immunoglobulin levels. Over time, chemotherapy patients can exhaust their reserves of the blood protein that is the first responder to viruses.

The best news to come out of rounds was that Benji’s creatinine level is down to 2.0, so the dialysis conversation is effectively over. The scariest and most critical news to come out of the morning rounds was that Benji’s absolute neutrophil count (ANC) has taken a nose dive. It was almost 5,000 yesterday–a healthy, normal number–and this morning it was 1,344. He is once again neutropenic. If the number dips to 500, we will have no choice but to give him antibiotics, as gut-destroying as they are, because he will have lost the ability to fight bacterial infection.

Benji’s body and spirits are tired. He was so down today. I was determined to create an upbeat atmosphere, with music, sunshine, target practice–he wanted none of it. He refused his favorite person at the hospital, the music therapist. He didn’t want to play games or watch movies. He wanted to go home.

Michael and Kathy arrived at the same time a little while later. Kathy retrieved a few essential items for me, and now my “flu bomb” antiviral oil blend has been diffusing all day and night. Michael brought more reinforcements, including a wide variety of beverages per Benji’s request. Kathy went out for even more drinks while she was here. Everyone is trying to make Benji as comfortable as possible.

Benji was visited by specialist after specialist this afternoon, and underwent more testing. He had his nostrils and cheeks swabbed and had more blood drawn. We saw the Infectious Disease doctor, two Gastroenterologists and a Dermatologist. As results came back in, a theory and a plan began tying together. His immunoglobulin levels came back very low, at 200 (1000 is normal). He also tested positive for rhinovirus (the common cold), and several other viral tests are still pending. The rash on his back (and now chest and face) are clearly viral. So, the team feels confident that Benji contracted a virus (or more than one) that he couldn’t shake easily due to his immunoglobulin deficiency. This happened simultaneously with the methotrexate induced kidney damage and accompanying ascites putting pressure on his organs. His virus is also likely responsible for the sores in his GI tract. The plan was to boost Benji’s immune system with an infusion of Intravenous Immunoglobulin (IVIG) in hopes that he would be able to fight this virus more quickly and give his body a break.

Kathy left to go tag team Banyan’s homework hour with Gana and feed him dinner, and we Michael and I learned more about Benji’s IVIG infusion. First, he’d be premedicated with Benadryl and Tylenol; the Tylenol to prevent headaches, and the Benadryl to prevent an allergic reaction. This, I questioned. I remembered that when Benji had his reaction to PEG asparaginase, we were told that the new best evidence says not to premedicate, so that symptoms of an allergic reaction aren’t masked. We were assured that for IVIG, this was the way to go, and that if Benji was going to have a reaction, it wouldn’t be masked. Once the two premeds were administered, Benji would receive the IVIG over a four hour period. It would be titrated; he’d get a small dose at first, and it would increase in increments so his body would build a tolerance to the pooled human protein.

Benjamin was exhausted. While the Benadryl dripped, Michael encouraged me to nap with Benji, so that if we have another sleepless night, I’ll be prepared. I caught about twenty minutes or so. I kept peeking at Michael sitting on the edge of Benji’s bed, loving our boy and writing down his vital signs in my binder. The Tylenol dripped next, and I grabbed a quick shower. Then the IVIG drip began.

Benjamin tolerated the first, second and third dosages of the immunoglobulin just fine. Michael was getting ready to leave and rejoin Banyan when Benji’s IVIG was upped to its maximum dosage. The nurses left, and Michael and I were saying goodbye, when Benji’s entire body started vigorously shaking. His oxygen dropped and his pulse skyrocketed. We called the nurse, and suddenly we had a full blown rescue on our hands. They injected Benji with 100mg of Hydrocortisone. The shaking (called rigors) didn’t stop. The ARNP on the floor ordered a dose of Demerol. Michael remembered to ask her if it was nephrotoxic and I quickly looked it up. It is, of course. The ARNP called the pharmacist, they reduced the dose, and pushed the medicine through his line. I held my head to Benji’s and breathed deeply, like I used to when he was a baby, calming him down. Finally, his pulse and his blood pressure came down, the shaking stopped, and Michael and I exhaled. It was, for me, the scariest moment of this whole wild ride so far. I was so thankful Michael was there.

With Benji soundly sleeping and his vital signs beautifully normal, Michael left, and I started asking questions. I’ll have many more for the team at rounds tomorrow. The IVIG was discontinued, and the discussion tonight pointed to resuming it tomorrow over twelve hours rather than four. We’ll need plenty of assurances from our team, and I’d like the nephrologist’s input as well.

I expected Benji to stay asleep for hours, but surprisingly he woke up a little while later. It was dark and quiet in our room. I had the Rays game on as I was taking notes. Benji opened his eyes just in time to watch Kiermaier make another spectacular catch. He started fighting me on wearing his oxygen tubes, and making commentary on the game. Both very welcome signs.

Tomorrow is a new day, and I choose to believe a major corner will be turned for the better. Benji’s body will be supported in moving this virus out. His immune system will stay strong enough to ward off bacteria and avoid antibiotics. He will feel more like himself, and want to play. He may even request food. These are my dreams tonight.