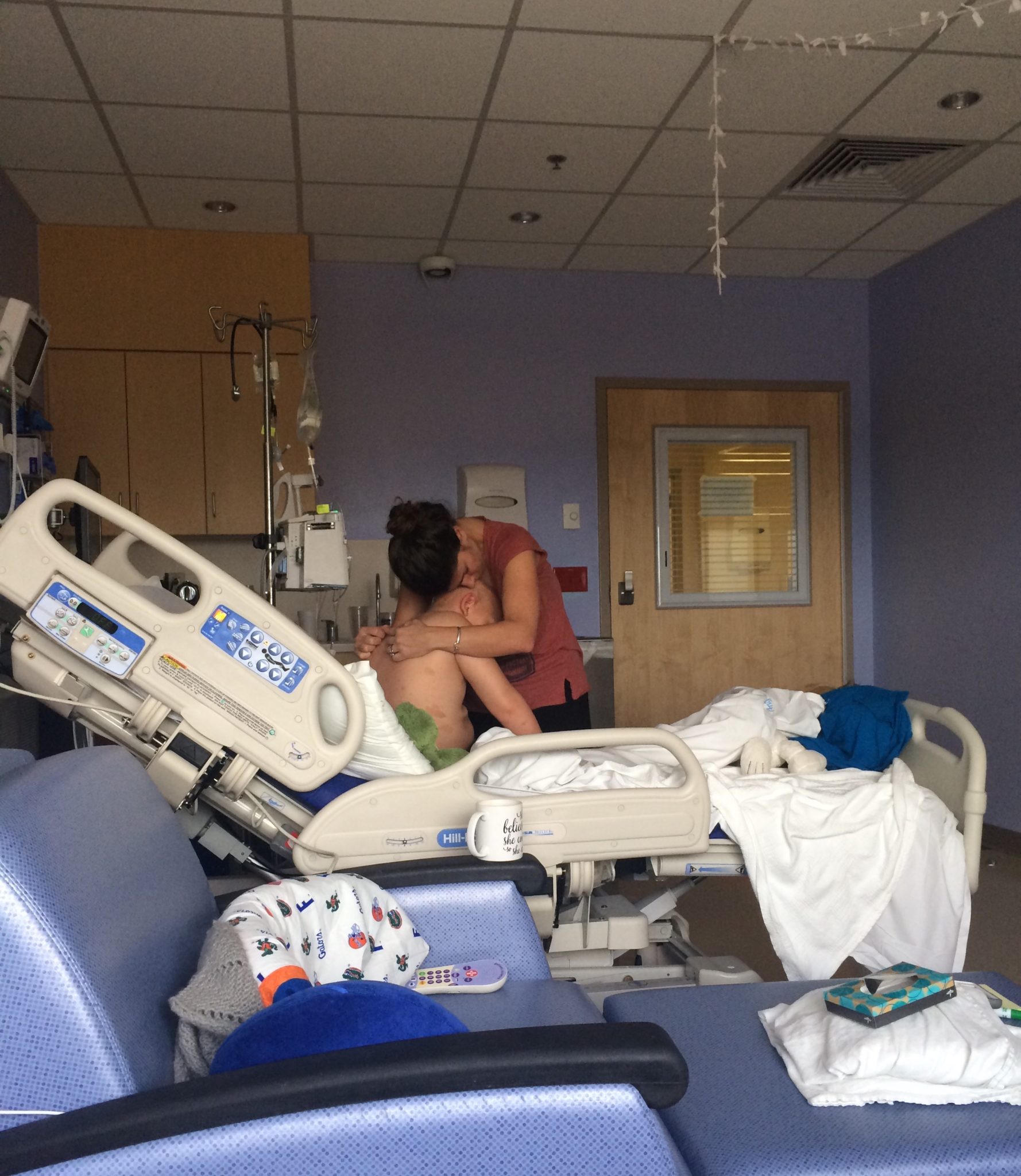 Benji had a high fever all night long, and woke up often with pain and diarrhea. He took fewer baths and we got a bit more sleep than in nights past. We chose not to give him Tylenol and to let his body fight through the night. As the sun rose, Benji’s fever started to fall on its own. It was a nice way to start the day. He had his longest fever free stretch this afternoon.

Dr. Mayer was absolutely giddy that Benji had had diarrhea through the night. In her experience, this points to a virus working its way out of the body. More good news came with the morning lab results: Benji’s creatinine has gone down to 2.57. I feel safe in saying we have ended the dialysis conversation.

The rest of Benji’s labs looked great this morning. His hemoglobin stayed high enough to avoid transfusion. His absolute neutrophil count (ANC) is plenty high to continue fighting the mysterious battle he’s in. The only number that dipped too low for Dr. Mayer’s comfort was Benji’s albumin, a protein found in blood plasma. She ordered an infusion of the serum. It was golden in color and dripped into his line over a four hour period.

Michael arrived in the afternoon with more reinforcements, specifically to try and comfort Benji’s sore throat. This is a new symptom, but one that supports the viral theory. Other new symptoms appeared throughout the day too. He developed a rash on his back, one that looked eerily like the alleged cellulitis that sent us to the ER last Saturday. Because he’d just had the Albumin, his care team encouraged a half dose of Benadryl to rule out an allergic reaction.

The Benadryl made Benji sleepy. Aunt Sarah left us then, and Michael and I took a nap with our boy. We woke up a little while later to the Tampa Bay Buccaneer cheerleaders standing outside our door. Benji looked at me and shook his head no. They took their pompons to the next kid’s room. This seventh floor gets pretty interesting sometimes.

Kathy and Gana came up to see Benji, and brought Banyan and dinner as well, both very welcome sights. When they arrived, we were examining the other new developments of the day. Because Benji’s port is accessed, we’d been covering it with Aquagard for his many baths until Michael brought us Press ‘n Seal. This afternoon, the skin that was repeatedly adhered to by the Aquagard became severely irritated, warm to the touch, and starting to blister. When Benji saw the area in the mirror he grew sad. He said “I feel like I’m not taking care of my body.” I corrected him immediately. He is taking care of his body better than anyone I know. We requested Aquafor for the affected area and have figured out a way to let Benji take baths without using the adhesive.

The other development we were checking into was the possibility that Benji has mucositis. This is a common byproduct of chemotherapy whereby the mucous lining of the gastrointestinal tract thins and sheds, leaving the mouth, throat, intestines and anus susceptible sores. I’ve been very proud of the fact that Benji has made it this far without a single mouth sore, using our homemade mouthwash and glutamine. Tonight, he developed two, in quick succession. This could also explain the increasingly sore throat.

As everyone was leaving for the night, Benji had another rough episode of vomiting and diarrhea. The Benadryl did nothing for the rash on his back, which could be viral, but is no less irritating. When his night nurse came to take his vital signs a little while later, his fever had risen significantly. She came back in with the necessary tools to collect another blood culture. She drew the blood while Benji and I watched the Rays game.

I remind myself that things are looking quite good up here on the seventh floor. Benji’s immunity is strong. He isn’t in dialysis and his kidneys are recovering. All cultures continue to come back negative. He ate a few bites of yogurt again today and was peaceful enough to watch a movie. We have so much to be grateful for. It’s just difficult to watch so many of his systems be in such discomfort all at once. He’s certainly gone through enough, and I’m ready to see him feeling strong again.