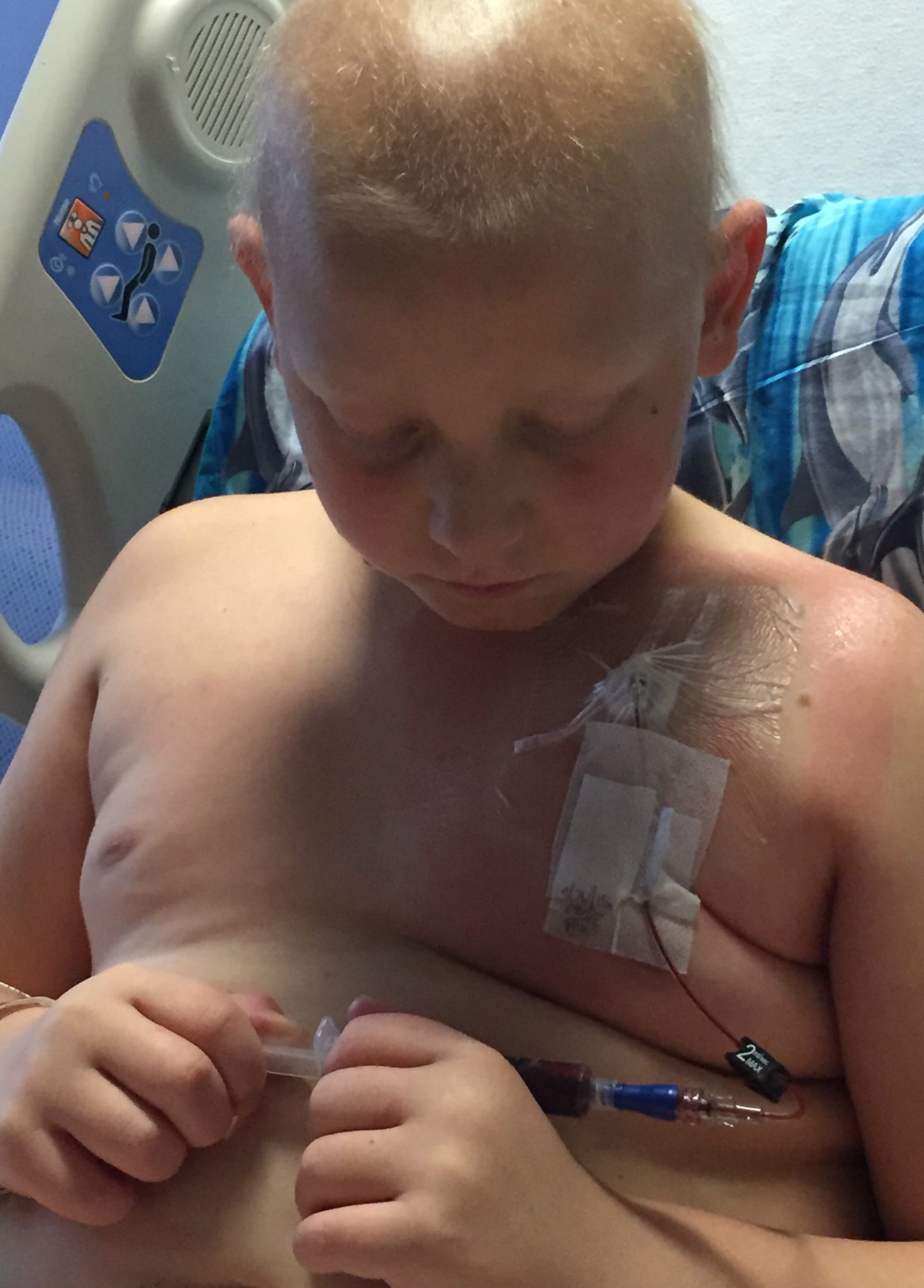 We are still waiting for answers to Benjamin’s mysterious pain and fever. But various possibilities are being ruled out right and left. We are in good hands, and many of them.

We didn’t get much sleep again last night, as Benji woke up every hour for warm baths. He was so fevery and hurting badly. I suggested pain medicine over and over, but the thought of swallowing a pill or having a new fluid drip into his line made him nauseous. Benji was physically and emotionally exhausted. He said to me, “I wish I could try your milk again.” It was so unexpected and such a primally wise and beautiful thing for a child in pain to say to his mother. Something deep within his body’s memory was speaking then. “I wish you could too,” I told him. Finally he agreed to pharmaceutical relief at 8am, and slept for almost four hours.

The Monday morning rounds happened at about 11am. Benji was still sleeping. I was thrilled to learn that Dr. Mayer was our oncologist for the week. Her team surrounded her and she listened carefully as the nurses and I filled her in. She absorbed all of the information and wore an earnest expression. She told me about several tests she was considering, then she said, “Let me examine him first. In medicine that’s often the best place to start.”

I love Dr. Mayer’s hands on, holistic approach. While she was examining my boy, his Aunt Sarah arrived. She’d been texting updates to a physician friend and came in with many questions. Dr. Mayer was receptive to the list of possibilities we wondered about. In response to some, she ordered tests. To others, she explained her reasoning for eliminating them as culprits causing Benji’s pain. “There are no egoes here,” she said. I so appreciate her respect.

Dr. Flores, another nephrologist, was next on the list. He was pleased with the trend in Benjamin’s creatinine and feels confident he will avoid dialysis. He explained that if the source of Benji’s pain and fever remain unidentified and a CT scan with the nephrotoxic contrast dye becomes absolutely necessary, he could prepare Benji’s kidneys with hydration and medicine; but that would not be an ideal situation. Benji’s kidneys would take another hit.

While Benji slept, his fever was low. But once he woke up and felt pain again, his fever increased. He was taking a long hot bath when we met a third new team member, Dr. Dumois from Infectious Disease. He was there to gather information and rule out things like food poisoning, disease from animal contact, unpasteurized food, etc. He would order more testing as the day went on.

Benji was shaky when he got out of the bath his afternoon. He slept as much as he could. He was nauseous and his fever was the highest it’s been at 103.5F. Dr. Mayer approved another dose of Tylenol, and we gave Benji Kytril for his nausea as well as Calcium Acetate to continue regulating the phosphorus in his kidneys.

When Michael arrived a little while later, Benji was starting to feel much better. His fever and nausea were alleviated, and he actually asked for a couple of bites of yogurt with honey. I find it pretty fascinating and awesome that he would request yogurt. His gut could sure use the probiotics. Primal wisdom, this kid.

Dr. Mayer ordered another ultrasound and requested specific pictures. She was being very comprehensive in her approach. The ultrasound tech wheeled her machine into Benji’s room, gooped him up, and took photographs of his gall bladder, liver, kidneys, bladder, pancreas and intestines. Michael held his hand. He didn’t like the feeling of the goopy wand pressing into his pain, but he went into his own mind, like I’ve seen him do so many times, and found his peace with it.

Benji’s evening blood draw was next. There were several extra collection vials at the nurses’ station. Dr. Mayer had ordered additional blood tests for the lab technician to process, analyzing various functions and looking for the presence of possible clues to our mystery. Benji has developed a little anxiety during this hospital stay about the blood draws and their accompanying flushes. Again, he found his peace, and his ownership of the process. He used his oils to combat the saline. He drew his own blood. Every tiny bit of control he can feel right now is helping.

Before Michael left to go relieve Kathy and Gana, who were feeding Banyan and helping him study for his science test, Dr. Mayer came in to update us on her synopsis of the mystery and her plan going forward. Since Benji was awake and feeling much better than the last time she’d seen him, she began with an exam and some questions for her patient. Then we stepped outside with her, leaving a content Benji with his Aunt Sarah.

Dr. Mayer was so thorough in her explanations to Michael and me. She told us which possibilities she had ruled out throughout the day and why. She said that right now she and the team were carefully looking at three scenarios: enteritis (both viral and bacterial), a bacterial abcess, or kidney associated pain from inflammation and excess fluid.

We asked lots of questions, and left the conversation feeling extremely reassured by Dr. Mayer’s hopefulness. She is taking into consideration not only the images and numbers coming at her, but the child she is treating. The fact that Benji is seeking warm water over and over, she said, points more toward the kidney associated pain than, say, abcess, as water is a muscle relaxer. He has had quite a buildup of extra fluid over the last few days that could point to this option as well. She also remembered from our previous hospitalizations that Benji’s discomfort manifests in his belly. She was really considering the whole picture.

Michael left for the night, and Sarah went down to the cafeteria to get us something warm to eat. When she returned, we sat on the couch in the dim room while Benji slept. We saw Dr. Mayer approach through the blinds. She’d come herself to deliver happy news.

The results of Benji’s blood work shows a creatinine level that continues to decline. His hemoglobin has come back up, so a transfusion may not be necessary. His liver numbers have stabilized and his white blood count has come down. Even more reassuring were the clean and clear results of Benji’s evening ultrasound. Dr. Mayer said that his spleen and liver are slightly enlarged, but no more so than any other patient receiving chemotherapy; these organs work overtime to process the medicine. She said she was specifically looking for abcesses and pockets of infection and found nothing. She also said that the amount of extra fluid buildup, or ascites, had decreased significantly. The ultrasound effectively eliminated one of the three possibilities we had discussed earlier.

We aren’t taking things one day at a time, but five hours at a time, says Dr. Mayer. We don’t know how long we’ll be here, and we certainly don’t know yet exactly how this will impact Benji’s treatment moving forward. Tonight, that doesn’t matter.

I asked Dr. Mayer if it was possible that whatever Benji was working through would resolve on its own. She said it was not only possible but probable. She was very reassured by Benji’s appearance and abilities. The conditions they fear the most in oncology patients would present vital signs that show they are in real trouble. Not the case with Benji, who, it seems, is just using his miraculous body to overcome one more obstacle.