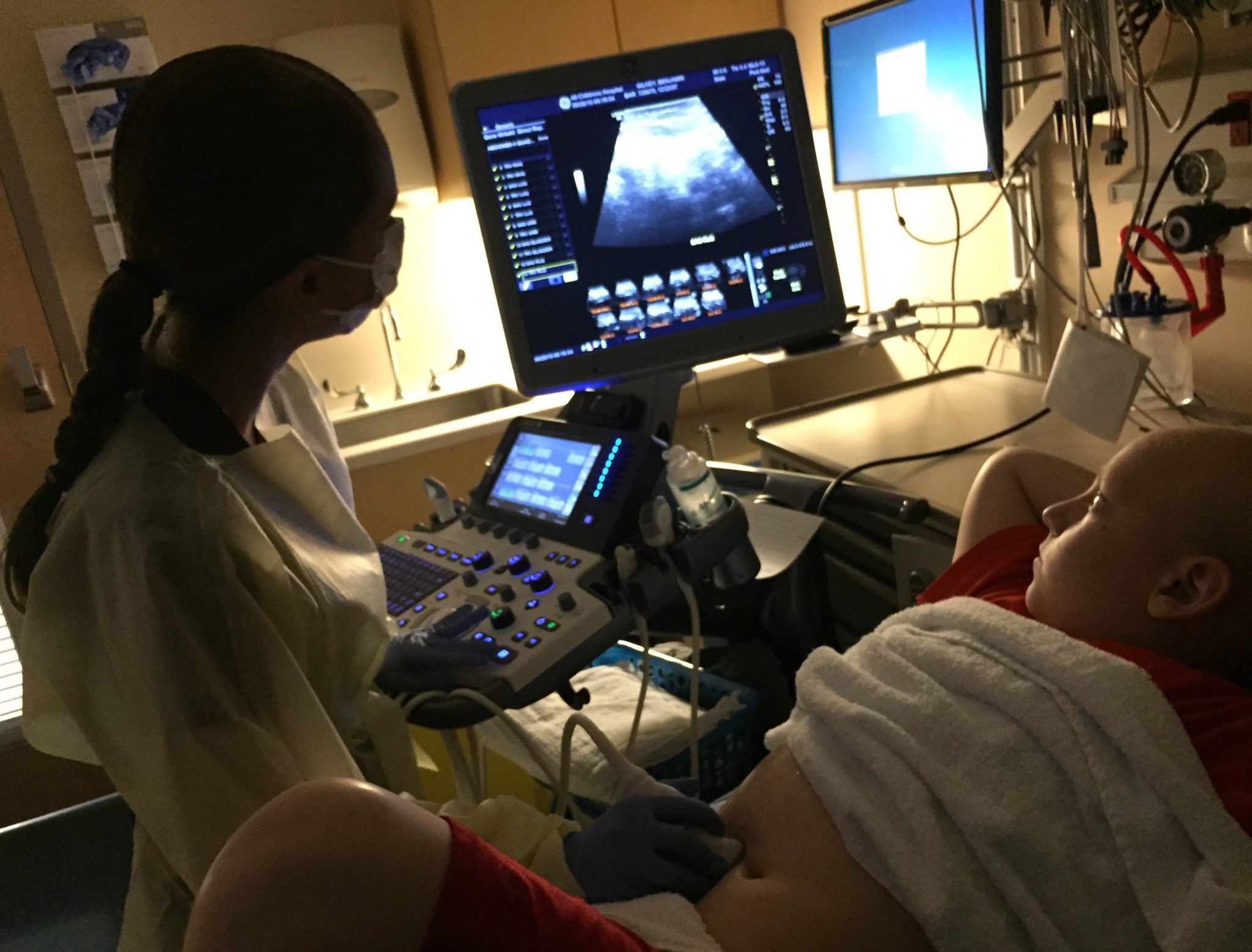 It was another sleepless night last night. Benji and I finally settled into sleep after midnight. We were up again for warm baths at 1:30am, 2:00am and 2:30am. I was growing more and more concerned. His pain was increasing. He was asking for pain relief rather than denying it, and it wasn’t working. I called the clinic at 3:15am.

Dr. Grana said that we should come to the Emergency Center if the Oxycodone I’d just given Benji didn’t work. We talked a little while longer, and by the time I was off the phone, Benji was asleep in bed with Michael. I joined him, hoping for enough shuteye to feel adequately alert for a possible drive over the Skyway.

At 5:15am we were up for the day and it was clear what we needed to do. I showered quickly and threw my hospital bags together. Benji and I were on the road an hour later. He’d already taken another dose of oxycodone by this point and several baths. Nothing was working.

Benji slept through a spectacular sunrise over the Sunshine Skyway. He woke up and vomited as I was parking in the Emergency Lot at All Children’s. When his vitals were first taken in triage, his blood pressure was higher than it’s ever been, at 147/98. It has come down since then, but it’s not yet where it should be. He has had an extremely rough couple of days.

Over the next few hours, Benji’s port was accessed, his urine was collected, his blood was drawn for several chemistry panel tests, and he had an ultrasound, vomiting a few times in between. The lab results showed no increase in amylase and lipase, so pancreatitis was off the table–but Benji’s creatinine had made a ridiculous spike, a seven-fold increase over the normal levels on Thursday’s labs. This indicated that his kidneys were not properly detoxifying his body.

Michael and Banyan arrived just as the technician returned with orders to take a kidney specific ultrasound. We were also told that Benji would experience his first MRI to definitively rule out appendicitis and take a closer look at the kidneys. Soon, we were all walking with Benji, his wheelchair, and his IV pole to the Imaging Center, a part of All Children’s we hadn’t seen before.

As far as MRI machines go, this one was a beauty. It was totally kidded out with stickers and beachy scenes on the ceiling. They made Benji as snug as a burrito, and gave him earplugs and headphones to soften the noise of the machine. They asked what music he wanted to listen to. He chose Michael Franti. The tech explained that there would be times she would speak to him and ask him to hold his breath or to breathe normally. She let me stand right next to the opening. She gave me a buzzer to press if he needed a break. She left the room, he was sent through the tunnel, and the imaging began.

Where the design and comfort measures of the MRI machine succeeded, the communication methods failed miserably. Benjamin overcame his initial anxiety by using his mind control techniques and eventually falling asleep. But the nurse kept chiming in through the speakers, waking him up. “Hold your breath for fourteen seconds,” or “Breathe normally,” or “Breathe in, breathe out.” The problem was, with his earbuds and headphones, he couldn’t understand her; he just heard a voice and knew she was giving him instructions. His expression told me he was fearful that he wasn’t doing something right, and his anxiety would kick in again. It was kind of a mess.

I buzzed the nurse in and explained. She abandoned the idea that Benji should hold his breath (good move) and we both told him to just relax and breathe normally. Once again he fell asleep, and stayed that way a good fifteen minutes. Then Nurse-Breathe-In-Breathe-Out piped in again, waking him up. I’d try and translate for her using my eyes and gestures; he could see my face, and feel my hand on the top of his head, where it stayed for the fifty minutes we were in the room. The whole time, of course, he was in severe pain. While he slept, I laid my head against the outside of the MRI machine, and just for a moment, I allowed the fear in and the tears out, and I prayed. Hard.

When the MRI was over, Benji and I rejoined Michael and Banyan in our bay in the emergency room. They had been visited by a nephrologist while we were gone. He told Michael that Benji’s creatinine levels and the results of his ultrasounds pointed to acute renal injury. His kidneys were functioning at 100% on Thursday. Today, they are functioning at about 18%.

Benji was so thirsty when we returned to our bay, but we were not allowed to give him water until the results of the MRI definitively disproved appendicitis, which was one theory to explain his pain. As soon as we got the results back that his appendix was normal, he reached for his water bottle. One more set of blood labs was drawn, and we waited for the results. If Benji’s creatinine had spiked, we’d be admitted to the Intensive Care Unit for kidney dialysis. If it had stayed somewhat stable, we’d be admitted to the oncology unit on seventh floor. Fortunately, the latter was the case.

We can are on the Skyway side again this time. Our prayer flags are hung. We requested a room with a tub, and Benji begged to take a bath as soon as his vitals were taken. He vomited as soon as he got out. He requested and was given medicine for pain. The nephrologist came in to meet him and to talk to Michael and me. He was followed shortly thereafter by Dr. Grana.

I was relieved to see her. Dr. Grana was hopeful that Benji’s creatinine numbers would not warrant dialysis. We will know tomorrow. She explained that while kidney injury is somewhat rare, it does happen in leukemia patients, and that the Methotrexate is almost surely to blame. Benji has two more rounds of the chemo in October, and he will probably be admitted for those, so that his creatinine levels can be monitored and he can get ample hydration. Dr. Grana was careful to tell us that the kidneys are extremely resilient, and that acute injury is almost always 100% reversible. Then, she gave me a hug, and she would not let go. It was such a moment of genuine compassion that it almost undid me.

Benji slept for a few hours after the pain medicine kicked in, and I curled up and slept a little with him while Michael and Banyan watched the Gator game. Michael’s sweet mother came to quietly pick Banyan up and take him to a friend’s house for a sleepover. Benji’s labs were drawn again as he was sleeping, and the results came just before shift change: his creatinine is trending upward, but only slightly. Not enough to make a decision just yet. The fact that his potassium levels are solid is reassuring to everyone. He is taking calcium acetate to help regulate the phosphorus in his kidneys, and when he feels like eating again, he’ll be on a renal diet; low sodium, low potassium, low phosphorus.

Now, we are on fever watch. At shift change the nurses took Benji’s temperature and it was 102.3F. Normally the protocol would be to take a blood culture and start antibiotics immediately. But Dr. Grana knows that Benji’s neutrophil count is high enough to fight infection, and that he just stopped taking the antibiotic Clindamycin for last weekend’s suspected cellulitis. Michael and I believe that the Clindamycin played a part in this somehow, most likely in its unhappy marriage with Methotrexate. A family member called us today to tell us that her mother had taken Clindamycin and it caused kidney damage. We will definitely be bringing this up at rounds tomorrow.

So, tonight, we will monitor Benji’s fever and manage his pain. And we will sleep. Tomorrow at 6am, his blood will be drawn again. I imagine we will have a big team meeting about the results, and make a plan bright and early.

I don’t know how to process the lessons of this week. I am relieved and grateful to be in this building tonight. I know it’s where Benji belongs right now. But I am having a hard time keeping the fear out. I have almost ten months of practice keeping one set of fears at bay, and I’m really good at it. Today brought a whole new army. It is so hard to see Benji in pain. It gives him a color and countenance that unnerves me. I need to sleep, and reload my defenses. Tomorrow is a new day, and with it will come a plan.