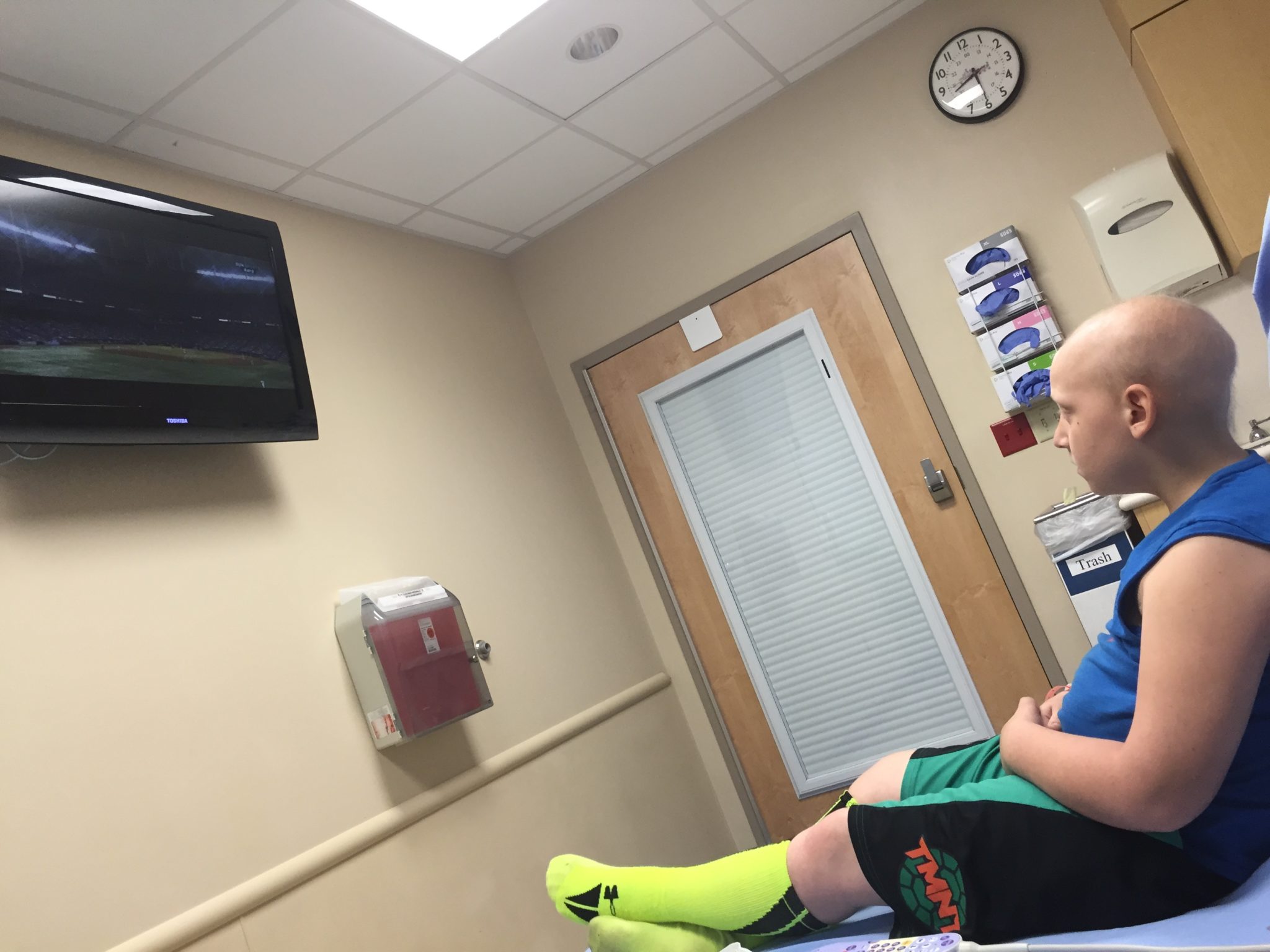 What a roller coaster. We went up to the All Children’s Emergency Care Center tonight, totally unexpectedly. We are very grateful to be home.

Benji developed what looked like a heat rash on the upper left side of his back this morning after breakfast. It was warm to the touch, mildly painful, and not itchy. I snapped a photo and uploaded it to my online moms’ group first, before calling the clinic. I wanted to rule out “chemo rash,” something that seems to be a common side effect of treatment that we have not yet encountered. Instead, across the board, the moms told me I was dealing with cellulitis.

I diluted some lavender oil and applied it to the area, then quickly called the clinic. Dr. Moore, Benji’s diagnosing oncologist, was on call. This was a relief. In the time it took for him to return my call, I had Googled all I needed to Google to understand that this could either be resolved quickly, or it could turn quite serious. It’s essentially a bacterial infection of the skin tissue. If left untreated, it could travel to the blood. Michael took out a marker and outlined the affected area on Benji’s back, so that we could monitor its size. Dr. Moore was reassured by the lack of fever, and told us to check in with him later in the day if the area spread.

We went on with our day, grabbing a bite and hitting a few golf balls before Banyan’s double header of basketball games this afternoon. We were walking into the gym for Banyan’s first game when I looked at Benji’s back again. The redness had definitely spread. Michael took Benji into the bathroom to snap another picture, and I sent it to Dr. Moore along with a phone call. He called back a few minutes later, during the first quarter of Banyan’s first game. I took the call outside. Dr. Moore said he would feel more comfortable with a doctor’s eyes on the rash, and possibly antibiotics. He wanted us to go to the emergency room. I thanked him, took a deep breath, and walked back inside.

The first quarter was coming to a close as I was walking back into the gym. There were seconds on the clock and Banyan had the ball. I got to see him drain a buzzer beater and throw his arms up in the air in joy, his face full of happiness. I was grateful for that moment, as I knew I’d have to miss his next seven quarters. I walked over to Michael and Benji in the stands to deliver the news. Benji couldn’t stop the tears. “Not on a Saturday!” he cried. But he got over it quickly, as he always does. I explained that if we didn’t go, the skin infection could turn into a blood infection that would mean we’d be in the hospital for many nights. He understood. I left him there with Michael to cheer Banyan on while I ran home to pack a hospital bag.

I walked back into the gym to pick Benji up a few minutes later. I kissed Banyan goodbye between his games, Michael and I made quick plans for various scenarios, and Benji and I were off. We stopped for smoothies on the way up, since I didn’t know how long it would be until Benji could get healthy food again. I put numbing cream on his port in the parking lot. We listened to the Rays game as we were driving north on the highway. Benji slept almost all the way to All Children’s. I saw three bald eagles on our way. We parked in the emergency room parking lot and checked in. We were immediately taken to a private room because of Benji’s compromised immune system. Still, we sanitized heavily and wore masks. The emergency room gives me the heeby jeebies.

The nursing staff at the ER was terrific tonight. Compassionate, quick, and so skilled. Benji was not thrilled to be there, of course. He was sharp and sarcastic with the nurses, who were forgiving. We met with an emergency room doctor and I filled him in while he examined Benji’s back. We decided that Benji should have his port accessed and blood drawn for a culture. If his absolute neutrophil count (ANC) was high enough, the doctor would feel comfortable prescribing Benji an oral antibiotic for the skin infection and sending us home. If he was severely neutropenic, we’d be admitted for intravenous antibiotics. I liked that plan.

Nurse Christina came back in with her sterile field of tools with which to access Benji’s port and collect his blood. Benji was so unhappy about this part. It’s hard enough to go through this ritual on days he’s expecting it. This one came out of nowhere, and on a Saturday. Christina was patient and kind. When it was time for the needle to enter Benji’s chest and the saline flush to flow through his line, he begged for his oils. I was so grateful that I had mixed up the new blend and remembered to bring it with us. It worked, of course, and Benji’s face calmed instantly. For a few seconds, Christina couldn’t get blood return. “Does he usually have a problem with this?” she asked. “No. He never has.” Finally his line filled with red, and I let out my breath. I give big thanks that his port still functions perfectly.

After Benji’s blood was drawn and his port was dressed, we waited. I knitted, Benji played games on my phone, and we watched the Rays game together. After an hour or so, the ER doctor came back into the room. He told us that he hadn’t received all of the numbers from the lab yet, but the differential looked good; it showed a white blood cell count of over 4,000, which would almost always indicate a healthy ANC. He left, and we waited another hour or so. The Rays lost. Finally, the doctor came back into the room with Christina. He asked Benji if he wanted to go home.

Benji’s ANC was 2,910. His immune system is strong enough to fight this infection with just a little help; we didn’t need to bring in the big guns. We were given a prescription for an oral antibiotic (Clindamycin) and they brought Benji his first dose to take while we were still there. Christina deaccessed Benjamin’s port, I signed the discharge papers, and we were free to go.

Benji was much more sensitive than usual tonight to both the accessing and deaccessing processes. Tears came both times. I understood. He endures so much of this kind of thing on a scheduled basis; when he is expecting a weekend off, and it is taken from him, these routine measures become a lot harder to tolerate. I was so thankful we could come home tonight. He is sleeping in our bed now, not in a bed on the 7th floor. He is in his daddy’s arms, not hooked up to fluids, or measuring his urine.

Through Benji’s blood work tonight we learned that his liver numbers, specifically his ALT enzymes, are higher than they’ve ever been. I gave him milk thistle as soon as we came home, and will continue it daily until his next appointment on Thursday. If they don’t come down, his chemo could be delayed. I also remembered that Benji’s Methotrexate is contraindicated with his weekend antibiotic. I know antibiotics can work differently in the body, and I wondered if this new antibiotic would inhibit the efficacy of the Methotrexate. I sent Dr. Moore a message. I plan to call him in the morning to learn more about what next week might hold. If Benji’s chemo is delayed, it will either be to help his liver recover, or help his infection heal. Both worthy reasons.

Guilt and doubt played tricks on me all day today, but I kept them at bay with clarity. It doesn’t feel good to give Benji another antibiotic. I know his gut is wrecked. But I can’t risk a blood infection. No way. I will have the probiotic discussion with his oncologists again, to see if we can reintroduce some beneficial bacteria into his gut. I will get some kombucha in the boy tomorrow. He took a nice bath in epsom salts with frankincense and lavender when we came home, which should help his skin significantly.

I have much to be thankful for tonight: a husband who partners with me seamlessly, gathering detoxifiying supplies (and pizza, at Benji’s request) in time for our return; an older son who gives his all in everything he does, and carries in my hospital bags without being asked; a younger son who plows through the most daunting of obstacles with grace and strength; a medical system that allows me to upload photos to my son’s oncologist; and a warm bed, my warm bed, that calls my name.