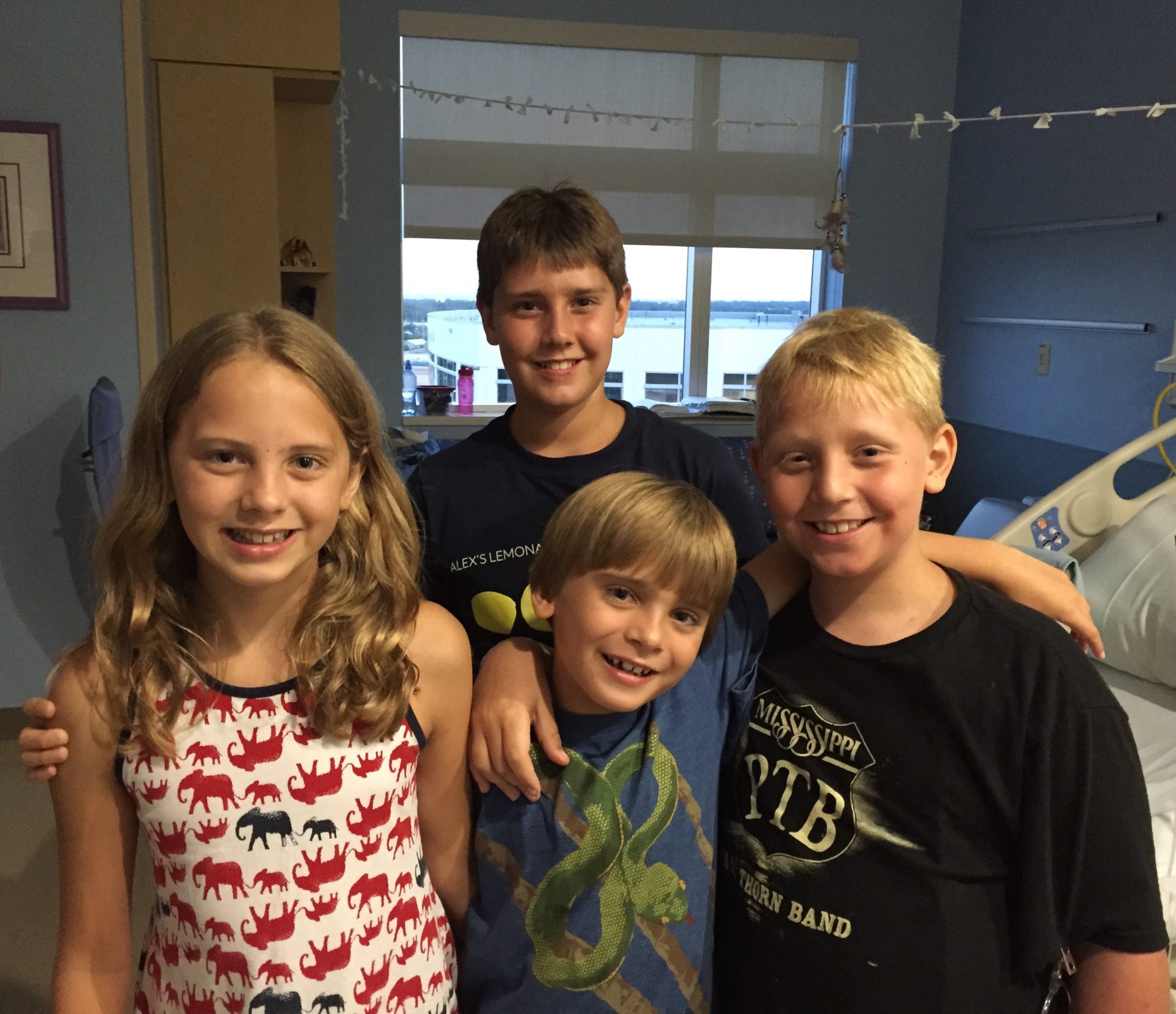 We slept in this morning. I stayed up late last night to be present when Benji’s methotrexate finished dripping and his blood was drawn. Jackie, one of our favorite night nurses, did all of this without waking Benjamin. It was such a relief to see nothing but clear, hydrating saline entering his body after she left.

Benjamin wasn’t nauseous this morning, but his tummy hurt. He had no appetite. He was beautifully distracted by our sweet friends and neighbors, who engaged him in a long FaceTime conversation. They practiced the cup song together, watched silly YouTube videos, and “followed” us into the play room for pet therapy.

When we got back to the room, Benjamin felt nauseous. We ordered Marinol, and replaced the Scopolomine patch we’d put behind his ear Sunday night. He was spared another vomiting session, but his appetite didn’t return.

The staff knows that Benjamin’s spirits are lifted by music. Today we were visited by two more music therapists; one with a mandolin, the other, a flute. He was mesmerized. I allowed myself a brief glimpse into the fall today, when our lives will begin to resume a semblance of predictability. I am looking forward to music lessons for Benjamin being part of our schedule again.

This brief glimpse into the future was propelled by a deeper examination of the roadmaps for Benji’s next phases of treatment. For the first time, I felt like I could be mentally ready for the days when the new normal begins to reconcile with the old. Come November or so, without accounting for any delays, Benjamin will be in long term maintenance. We will be in the clinic far less frequently, and he will return to school nearly full time. I’ve been scared to look ahead, scared to deviate from the “living in the moment” mentality that has served us so well. I am still not making any hard and fast plans, but it was refreshing to feel for a moment that I might be ready for the next chapter.

Dr. Grana came in for her daily checkup as I was looking at these roadmaps. I was grateful to clarify these phases with her and to learn that Benjamin will get a nice break after this hospital stay, a break that includes visits from extended family, Banyan’s birthday, and a holiday weekend. It will be a little mini summer for us that I didn’t think we’d have.

Some dear friends who live in St. Pete offered to bring dinner and come for a visit. They were totally flexible, understanding that Benjamin hadn’t eaten all day and was sensitive to smell. He was so excited at the prospect of seeing them. He remembered the meal they’d brought after he was first diagnosed. He requested a repeat, and they generously delivered. They arrived just before Michael and Banyan walked in the door, and just in time for weekly Bingo night at All Children’s (he won, again). Benjamin was happy to play with friends, and his appetite returned for the first time all day.

Benjamin’s 42 hour methotrexate levels were drawn just before the crowd arrived, and his first dose of Leucovorin was added to his IV to help his kidneys recover from the chemotherapy. When our friends left and Michael and Banyan remained, we learned the results of the labs. This is the first of two benchmarks Benji needs to meet in order to be discharged; it needed to be less than 1.0, and it came in at 0.83. One down, one to go. If his midnight levels come in at less than 0.4, we will head home in the morning. If they don’t, we’ll stay until they reach the 0.1 mark.

Benji’s tummy hurts again now, as he settles in to bed. I am given solace in knowing that he will only feel better in the coming days, and that a nice stretch of these days will be filled with just good, sweaty, sweet, salty summer.