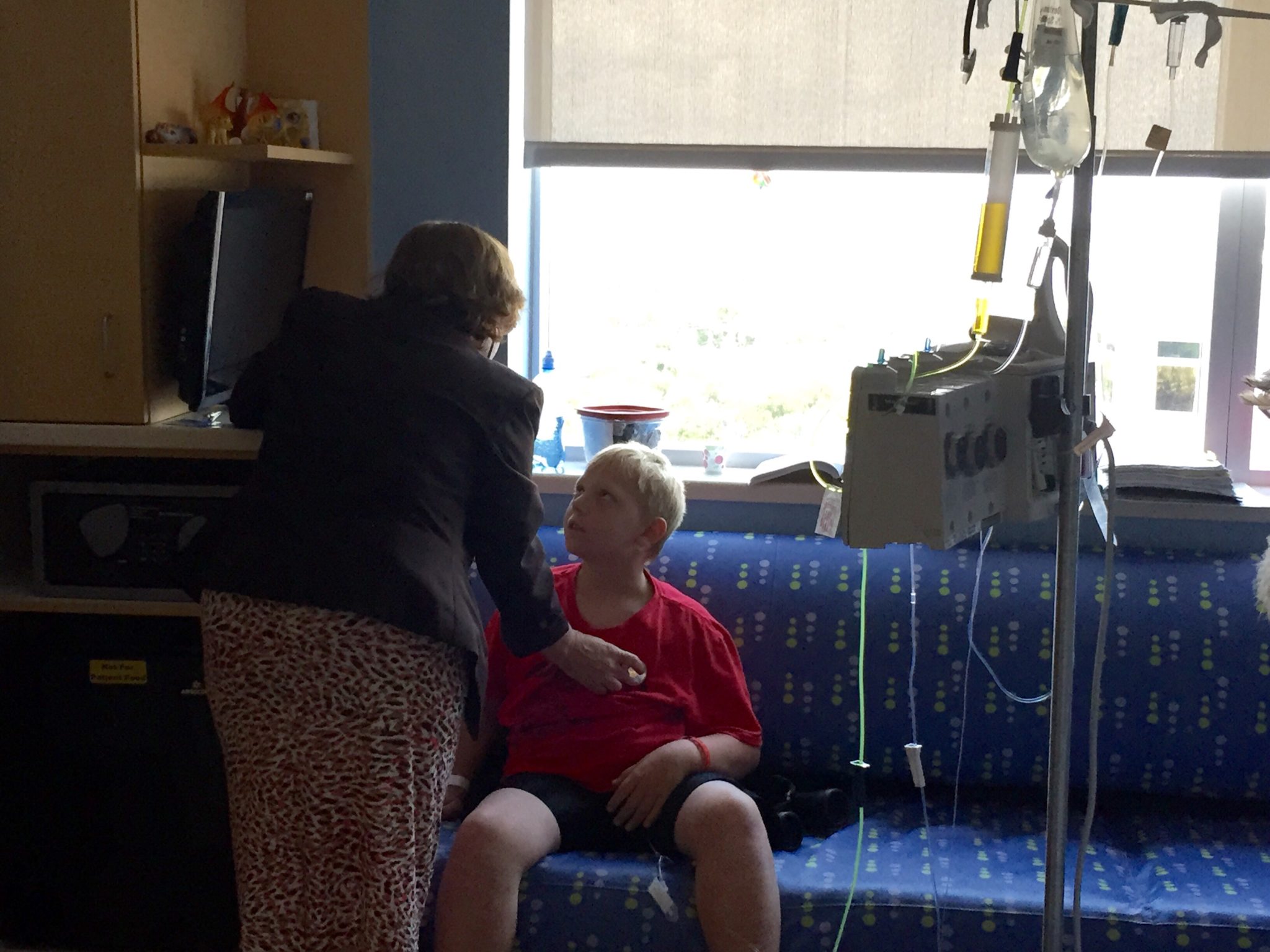 True to the form of these Interim Maintenance hospital stays, Benjamin woke up on day two feeling nauseous. He vomited twice in quick succession. He knows, without a doubt, that the methotrexate is to blame; just the sight of the neon liquid is now a visual trigger for him. He avoids looking at his tubes, vials and bags at all costs. His growing list of triggers has me thinking again about his detoxification regimen when this is all behind us. We’ll need to think beyond the physical.

As soon as the cool washcloth was placed on Benji’s forehead, I called our nurse and requested Marinol. We took it very easy for the rest of the morning. By noon, the Marinol had worked its magic, and he was ready for air hockey and a sizable lunch.

Dr. Grana is on the seventh floor this week, and she came by for a visit while Benjamin was feeling quite well. She said we had the coolest room on the floor, with our prayer flags and music and walky talkies and binoculars. She spent time just being with us. Her presence is instantly calming.

In the afternoon, we were visited by Kelly, the awesome music therapist, and her high school volunteer. We love when Kelly comes by. After a little Taylor Swift medley, she and her volunteer taught us how to play the cups, made popular by the Pitch Perfect movies. It was a terrific distraction for Benjamin, whose tummy began to hurt again just before they arrived.

Michael came over the Skyway to be with us after work, and brought with him what I considered to be extremely romantic reinforcements of kombucha and knitting needles. When he went to pick up the needles at one of my favorite yarn stores in all the land, the owner gave him two balls of yarn, a pattern, another set of needles and a fabulous knitting bag–a gift she’d been holding for me. Ironically, the owner of another gorgeous yarn store in Sarasota gave me a ball of yarn and accompanying pattern at the lemonade stand on Sunday. I feel so touched by these gestures. I know that each store owner took her time to choose luxurious yarn and a pattern that would be rhythmic and comforting. My cup is seriously full right now.

Benjamin’s tummy ache worsened as the night went on. I urged him to take Marinol, to stay ahead of the nausea. He said no, he thought he’d be okay. Unfortunately he wasn’t. He vomited again, and I requested the Marinol. It had only been in his system for 45 minutes or so when he threw up again. I looked at the clock and realized it had been over twelve hours since his last dose of IV Kytril. I called the nurse and she brought the medicine immediately. This last episode solidified for me that it is the combination of the three anti-emetics, not any one alone, that is necessary to make Benjamin the most comfortable.

Benjamin’s 24 hour neon methotrexate drip will be over in an hour or so, and he will have his first blood draw. Tomorrow his blood will be drawn again at 6pm and at midnight. Those two results will tell us if we can go home Thursday morning. For now, I’m happy to settle down with my sweet boy, the NBA finals, and a new ball of yarn.