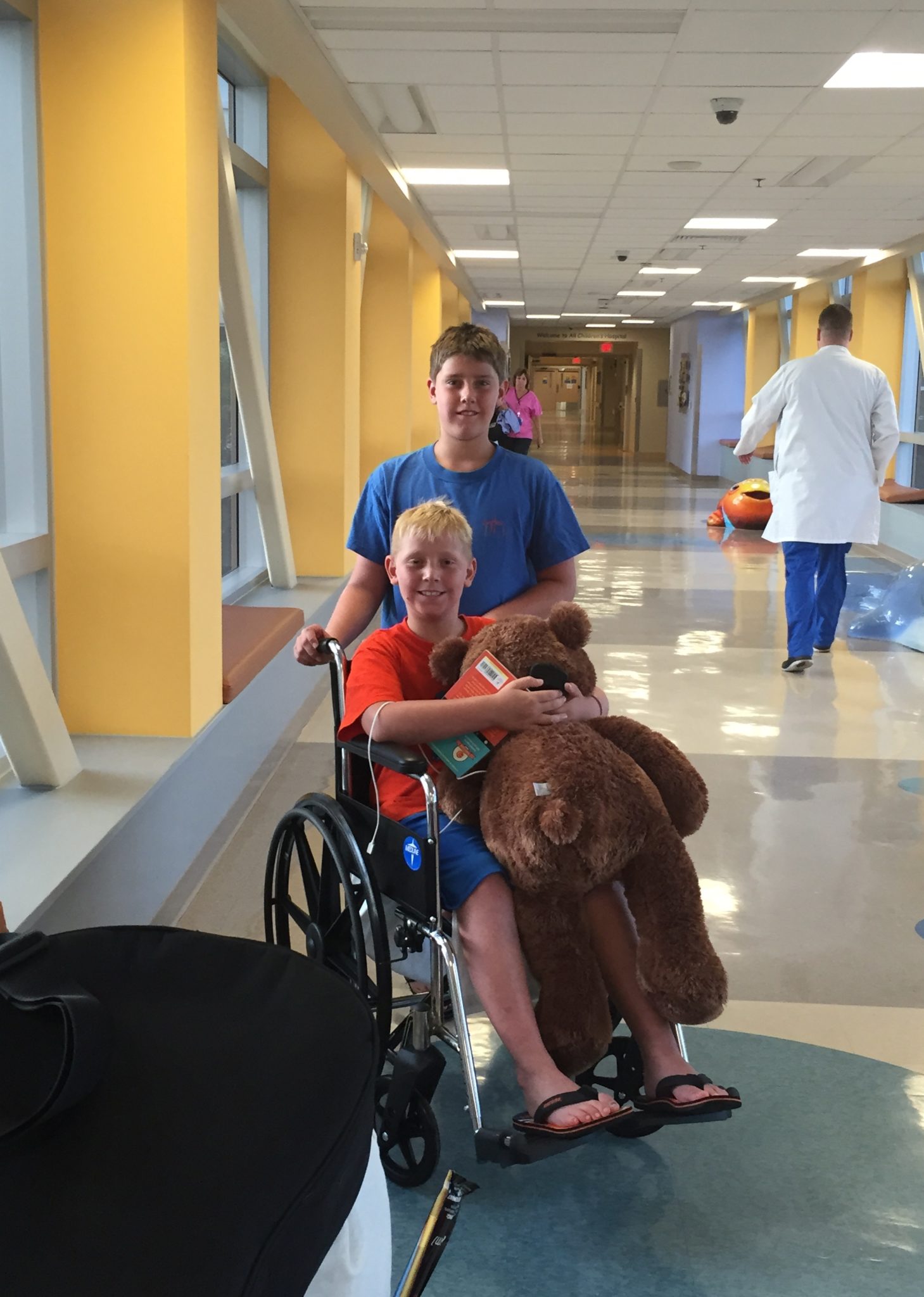 Yes, there are patterns here. On the third day of hospital admission, we sleep late. A desperate and deep sleep, easily interrupted and easily resumed.

I woke before Benji and watched him sleep over the pages of my book. I learned during rounds this morning that last night’s nurse had given Benji a dose of Lasix to help balance his output (he wasn’t peeing enough). She hadn’t wanted to wake me, apparently. Anger washed over me, but I resisted it. I let it go. I fought this battle already, I told myself. I would have said yes. It’s okay. Still, another lesson learned. Every night nurse from here on out will hear the words, “Please wake me up before giving him anything we haven’t already discussed.”

When Benjamin did wake up, he wasn’t nauseous. He wasn’t hungry, and his belly was tender, but he wasn’t nauseous. We went to the playroom for some air hockey almost immediately. Ronald McDonald and his weird clown accomplice were roaming the halls, trying to cheer kids up with their coupons and balloon animals. Benjamin wanted no part of it. He was really worried that a confrontation with this pure white face and loud voice would scare him. We kind of spied on the guy, peeking around corners and making a game of it until he was gone.

This is the second fast food chain costumed thing that has come to seven south while we’ve been there. It’s kind of bizarre, really, on many levels. Is it altruism or just really tacky marketing? One of the nurses saw us skirting the mascot and said to Benji, “What, you don’t like Ronald McDonald?” He said, “No. He creeps me out.” And she said, “Well I bet you like his food, don’t you?” And he said, “No. I don’t go to McDonald’s.” (And mama did a little happy dance, on the inside.) Disney characters and sports icons, I get. But paid representatives of corporate junk food conglomerates are just strange, and unhealthy. I will say that The Ronald McDonald House is an absolutely fabulous organization. There’s not really anything else like it, and it is the only way many families can stay together through treatment. But still. No creepy clown guy pushing Happy Meals in Benji’s room, please.

We went back to the room so that Benjamin could get his 42 hour blood levels drawn and receive his first dose of Leucovorin. We left a little later to go back to the play room and retrieve the plasma scooter for more laps around the 7th floor. I carefully navigated Benjamin’s IV tubes around the scooter, detangling a few times. We saw a woman walking with her small daughter, who was hooked up to an IV pole of her own. I recognized the mother’s face. She was the one I’d been introduced to online by a mutual friend. Her daughter was just diagnosed last week.

Later, we walked past the woman’s room, and I met her husband. She told me how they’d first found out, and about the moment when she first heard the word. I was transported back to that room with no windows where my head and chest felt like they would explode. We were both in tears. We changed the subject, and I tried to answer specific questions. It was just so hard to find the right words. I heard myself saying cliches that people said to me, ones I thought made no sense, like “It gets easier.” How could I say something so insensitive? I have written words about this every night for 153 days. Why, in the face of this mother experiencing the same feelings I have experienced, could I not find the words?

Benjamin’s 42 hour levels came back, and we were optimistic. His methotrexate level needed to be less than one, and it was 0.42. All he needed was to get below 0.4 at his 48 hour level draw. His job for the afternoon was to hydrate, hydrate, hydrate. He did fabulously. He hadn’t eaten all day, but he was on his second Gatorade when Michael and Banyan arrived. We all enjoyed being together, relaxing, reading, watching videos…but not packing. I refused to pack. I didn’t want to jinx us.

Benjamin’s 48 hour levels were drawn. A little while later, as we were waiting for the results, he thought he might be able to eat a little something–and then his nausea returned, almost simultaneously. I think it was predicated by the saline flushes that had just happened with the blood draw; even though they were fresh, there is such a strong association there for him. We didn’t take any chances. We ordered a dose of Marinol. A few minutes later he ate a banana with peanut butter and honey, but didn’t want anything else. Still, no nausea.

Our nurse came in with her arms raised in celebration–Benjamin was cleared for discharge, with a 48 hour methotrexate level of 0.38! Michael and I jumped up and started packing. Benjamin was happy, but hesitant. He knew that discharge meant we could go home, but he also knew it meant one more flush, and heparin in his port. He handled it beautifully, with the help of a nurse who flushed as slowly as I think she possibly could have.

Because Benjamin cleared prior to “Hour 54,” we were sent home with one dose of oral Leucovorin, which I will administer in an hour or so. This is a bit nerve racking. He has never been discharged with this much methotrexate still in his system. It is up to us to make sure he continues a pretty high level of hydration and output to flush the rest. The drive home left him feeling pretty yucky, so he is in bed now, resting with his daddy and watching the Lightning in the first game of the Stanley Cup Finals. I must admit, I visualized watching this game from home several times. I think I’ll join them.