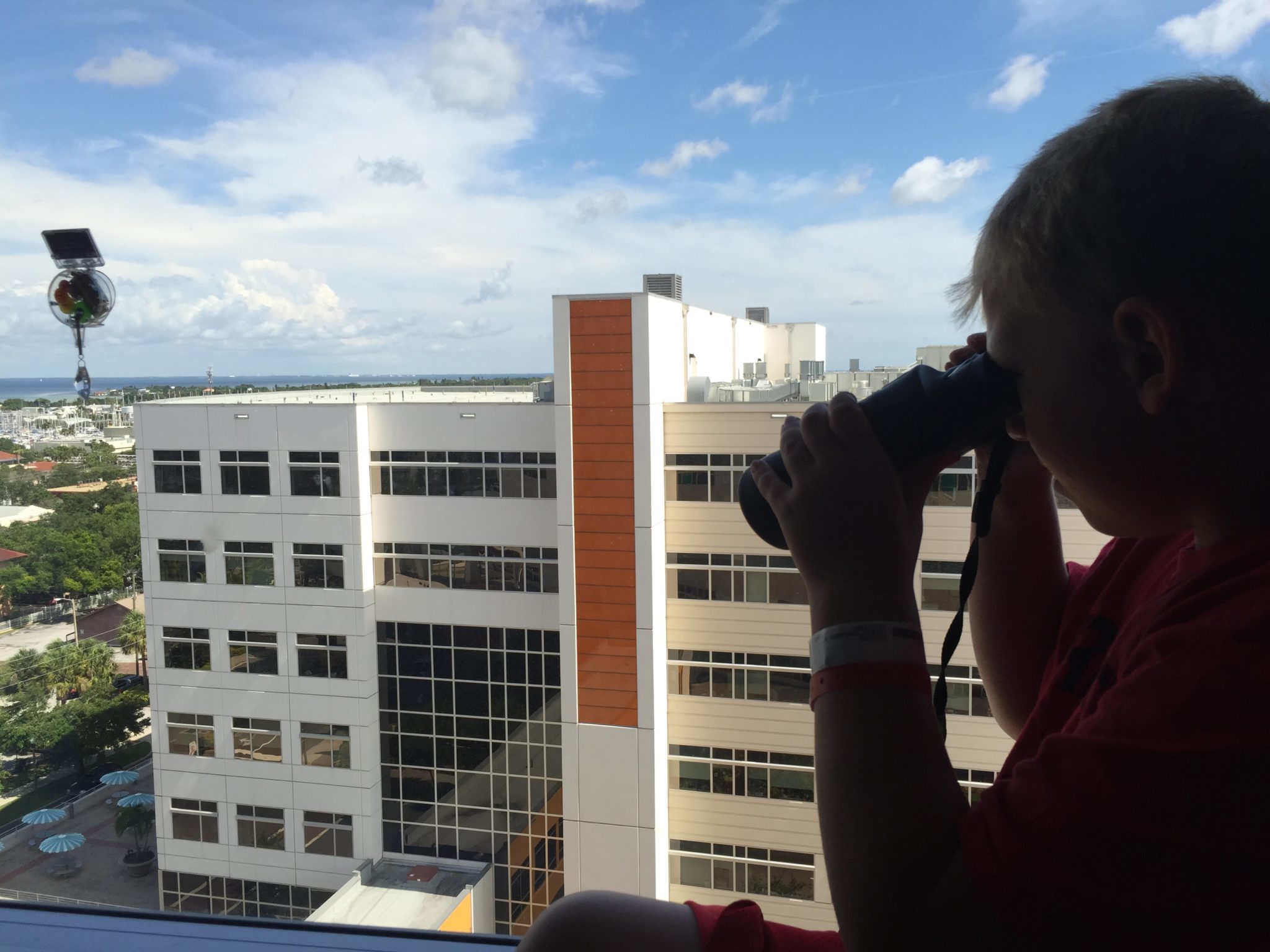 I woke Benjamin up at the last possible minute this morning. All bags were loaded into the car, and Bingo, the giant teddy bear Benji won during his last hospital stay, was riding shotgun. We said goodbye to Michael and Banyan, I put numbing cream on Benji’s port, and we headed north.

There were tears in the parking garage. They only lasted a second or two. Benjamin experiences his feelings fully, then moves on, and does what he has to do. I love that about him. Once we were in the outpatient clinic, he was laughing again.

We walked into the exam room and everything was already laid out for Benji’s arrival: his sterile field for port access, vials for blood, masks for us to wear, and an IV pole loaded with the saline bolus I didn’t need to request. I was so impressed that I didn’t think to ask if the saline flush in the nurse’s hand was freshly drawn until she had already started flushing his line.

Fortunately, the taste made Benjamin speak up mid-flush, and we caught it early enough. Once the nurse completed his blood draw, she switched out her next prepackaged syringe for an empty one, and we watched her draw the liquid into the vial. Benji was able to avoid the nausea, and in a way, I think he felt empowered that his voice made the difference. It was a good reminder to ask for the freshly drawn stuff every single time, no matter how together things appear to be.

Benjamin’s absolute neutrophil count (ANC) continues to decline slightly. It’s now at 1060. Still plenty high for today’s admission. We saw Dr. Oshrine in clinic and chatted while Benjamin got his prehydration and intravenous Kytril. I asked him who was performing Benji’s lumbar puncture today. It was Dr. Moore.

I was strangely relieved. Dr. Moore performed the last LP, the one that caused such pain later that evening. I hadn’t spoken to him since before the procedure. I asked Dr. Oshrine to let him know our concerns. Dr. Oshrine reassured me that double taps are extremely common and aren’t correlated with an increase in pain. Most likely, a muscle was nicked undetectably, or Benjamin’s position wasn’t optimal. He made me feel confident that no one had withheld any information that may have predicted Benjamin’s reaction.

Later, I was glad to see Dr. Moore’s face when I walked Benji back to the operating room. I was able to acknowledge what happened last time by speaking to him directly, and not relaying a message. I was not placing blame by any means. Just giving information that is necessary to continue improving care. When the milky propofol flowed for enough seconds to cause Benji’s big involuntary snore, I kissed him and turned to leave. I stopped, looked at Dr. Moore and said, “Thank you.” I put a lot into those two words. I know he understood.

Michael had arrived while we were still in the clinic, and he was waiting for me with our restaurant style buzzer outside the operating room. We grabbed two wagons and went to the parking garage, loading each one to its maximum capacity. We headed up to the seventh floor. We were given the same room as we had last time. This was comforting. We unpacked quietly and methodically, everything now having a place we didn’t need to speak about. Then we went to get Benji the pretzel with cheese his daddy promised him, and waited for the buzzer to tell us he was waking up.

Benji was much sleepier than usual, though he’d gotten a relatively small dose of propofol. I saw no other signs of discomfort. We took him up to the seventh floor and got him situated in bed, where he dozed off a little while longer. He was still hooked up to hydration. Our new nurse was asking the routine questions while I was setting up our little altar. When she was finished, she asked if we needed anything else. I said, “Just a couple of urinals to catch his pee.”

She brought them in, and Benji woke up on cue to fill one up. We saved the urine so the nurse could measure its specific gravity and pH. Benji cleared both tests on the first try! We were happy–this meant he’d start his chemotherapy early. We did have a couple of hiccups. There was no fresh saline on the floor, the cap left on his line by the surgical team had to be replaced, and the medicine had to arrive from the pharmacy. But all told, his vincristine was given, and his high dose methotrexate began at 5:25pm, a full hour before the deadline set by his protocol.

My stepmother, Benji’s Nanny, was in Lakeland for her nephew’s graduation and drove over this afternoon for a visit. It was so nice to see her. Benjamin loved scrolling through all of the photos on her phone, of family, horses, and snow. Michael’s mom and sister came with Banyan a little while later, and we all had a nice visit over fabulous Greek food. We laughed a lot. Benji ate, drank, and moved his body; three things I know will help this medicine flush faster. He fell asleep almost immediately after they left.

It’s so different up here now than it was during those early days. Yesterday, I received a message from a woman I know. Her friend’s daughter was just diagnosed with A.L.L. late last week, and she was starting treatment at All Children’s. I asked for her name and told her I’d keep an eye out, since I was sure we’d both be on the seventh floor. I took a lap when we arrived, and sure enough, I saw the little girl’s name on a door plate. The door was closed, and so were the blinds on the window. I remembered the feelings behind those blinds. I didn’t knock.

I reached out to the mom via private message a little while later. I told her how overwhelmed I was at the beginning, and to please not feel obligated to respond, but gave her my room number and an invite for tea. We messaged later. She was eating the first dinner she’d had since last Wednesday. She’d started an online journal. She had stopped crying so much. I remembered.

While we were waiting for Benji to go back to surgery today, one of the nurses was charting and said, “June first. Man, this year is just flying by.” Michael said, “This is the first year in my life that I don’t mind the pace. I want it to fly. Let’s get this behind us!”

Time is a crazy thing. It really does seem so fresh, the bruises, the fireworks out the seventh floor window, the fear we couldn’t speak behind closed blinds. Yet it also feels like the freshness happened ages ago. I honor the fear that was born in this room. I am grateful for the laughter that now fills it.