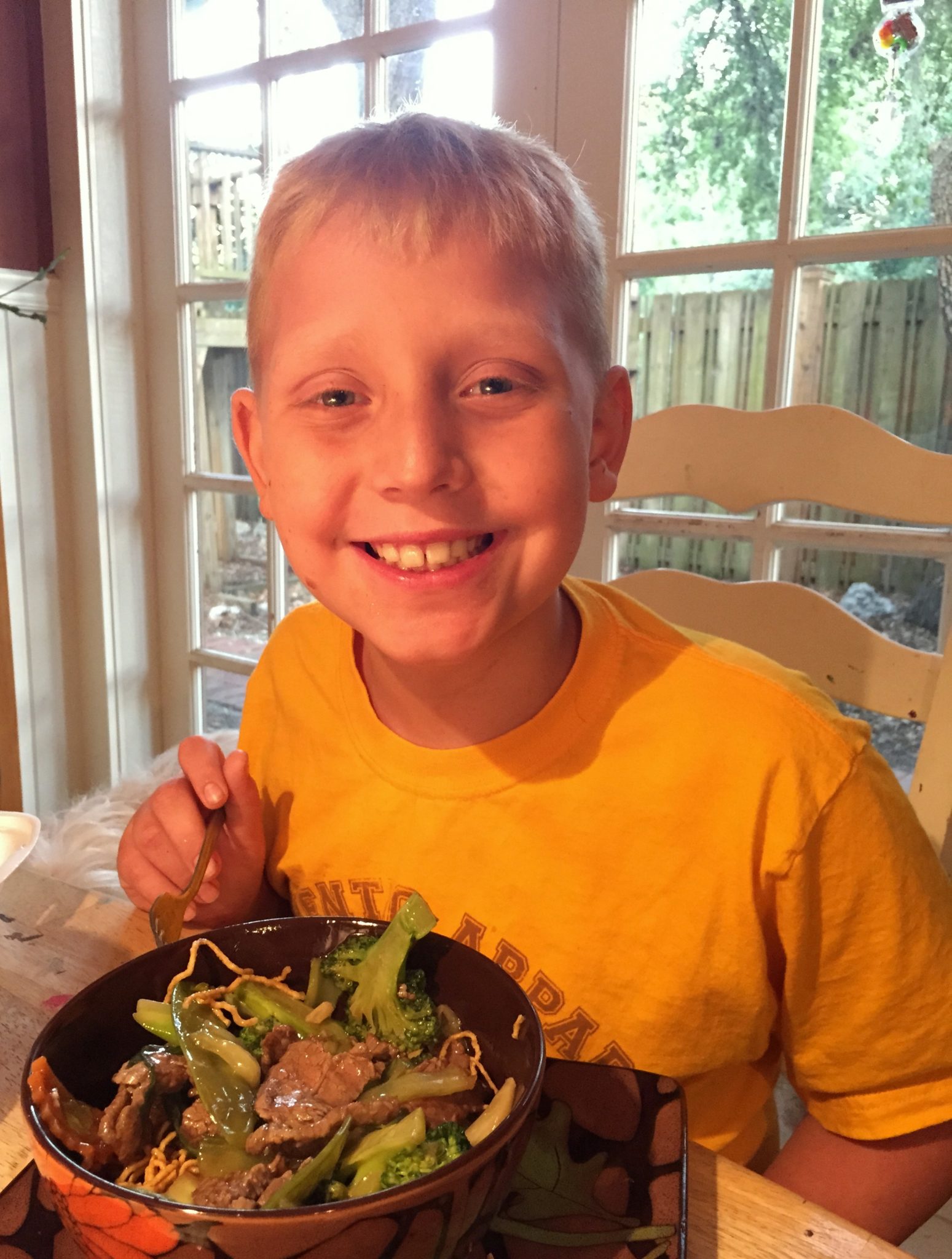 I woke up crazy early to see Banyan off on his three day adventure to Sea Camp. Just before we left, Benji woke up to say goodbye to his brother. He felt nauseous right away. I gave him his first at-home dose of Kytril, and left him with Michael while I took Banyan to his school and loaded him onto a charter bus full of excited fifth graders. I was gone less than twenty minutes. Michael texted me; Benji threw up right after I left.

The boy felt terrible. When he realized we had our regularly scheduled clinic appointment today, he protested. “I don’t want to throw up anymore. I don’t want to go to the hospital. Can’t they just come to me today?” I felt so awful. His resolve was crumbling. I made him a promise then and there. We will figure this out, and we will do it today. Seven days straight is too many. He needs a break and a new solution before we return Monday for our second hospitalization of Interim Maintenance, and his second round of high dose methotrexate.

I called the clinic. Michael hadn’t seen the pill in Benji’s vomit, but the rule of thumb is to re-dose if a medicine stays down for less than half an hour. I researched Kytril and learned that it is a serotonin inhibitor. I didn’t want to re-dose unless I was absolutely sure. I didn’t get a call back from the clinic by the time we were set to leave for our appointment, so I packed the Kytril, the bucket, and extra bags in the car, and got Benjamin as comfortable as I could in the front seat. I was grateful that he slept the entire way there.

Benji looked so unhappy on the way into the building, and his color was just wrong. It’s kind of a miracle he made it into the exam room before vomiting. When I signed him in, I saw Dr. Oshrine’s name on the list of physicians in the clinic. Our appointment was with a physician’s assistant we’ve only seen twice. Molly the medical assistant took Benji’s vitals. I asked her if there was any way we could see Dr. Oshrine today. I needed some answers, and Michael and I feel a certain level of confidence in Dr. Oshrine and in his affinity for research. And there is so much to be said for continuity of care. He’s simply the physician that knows Benjamin best.

Molly came back a few minutes later to tell us that Dr. Oshrine had switched patients with the PA and could see Benjamin today. It was completely unexpected, but I was fighting tears right there in Room #6. I think I would call it relief. We haven’t seen Dr. Oshrine since before Benjamin’s bone marrow aspirate, so we haven’t had his take on Interim Maintenance yet. I had promised my boy answers, and I now felt sure we were on the way to getting them.

Krista, one of our regular clinic nurses, came in to draw Benjamin’s blood. I caught her up to speed on the happenings of last week, of yesterday, of this morning. I think I was talking a little too fast. I told her I didn’t know what to do to get Benjamin’s nausea under control. She calmed me way down, and reminded me that Michael and I don’t have to figure out the solution on our own. We were in the right place, with the right people. I exhaled. The doctors and nurses in the clinic know Benjamin so well. By the time Dr. Oshrine came in a few minutes later, the Kytril had already been ordered. He felt completely confident in re-dosing. He had also ordered another saline bolus. With those on the way, we sat down for a long conversation.

Dr. Oshrine looked at everything in Benjamin’s metabolic panel, and gave me every assurance that his body is processing the medicine perfectly. Now we just needed to figure out the right combination of measures to make him more comfortable going forward. We talked about the way Kytril works, and which medicines would combine well to give him more armor against the nausea. We talked about the problems with the lumbar puncture. We talked about increasing hydration sooner next time. We talked about dehydration, mucositis, renal function, headaches. All of my questions were answered. My confidence was restored. He also told us that he makes it a point to tell his patients that side effects of high dose methotrexate usually last three days after the toxicity clears from the body. He might want to pass this communication tip to his colleagues.  This would have been very helpful information on Saturday.

We decided on a combination of around the clock Kytril, a Scopolomine patch behind Benjamin’s ear, and Marinol twice daily. Dr. Oshrine also said we could resume Zantac for stomach pain. He looked at Benjamin’s mouth, and said that he doesn’t have mucositis, just scalloping. He was happy to hear that we were giving him glutamine and aloe, and increasing our baking soda and salt rinse; we might be able to keep mouth sores away. He talked to Benjamin directly about keeping hydrated. He suggested that Benji use a stopwatch (or my phone), and every three minutes, he should take a sip of Gatorade (much preferred to water right now because of its sugar and electrolyte replenishment). Benji liked that idea.

When the hour of hydration and Kytril drip were finished, Krista flushed Benjamin’s line without him even knowing. Man, I love the ninja nurses. She deaccessed his port and we were free to go. Benjamin and I both left Room #6 feeling a million times better. My mom, who is on our coast for a few days, stopped by the clinic for a visit. I loved seeing her, and I love that she got to spend some time with Benjamin. We walked down to the All Children’s pharmacy together, and she and Benjamin sat outside while I began a long afternoon of insurance negotiation.

Our insurance company needed special authorization for both medications, for different reasons. The pharmacist at All Children’s told me these authorizations would likely take one to two days. One to two days is not acceptable when your child has been vomiting for seven. I was grateful for the challenge. I woke up wanting control of this situation, and this was the perfect outlet. I had both prescriptions transferred to our pharmacy in Sarasota. I asked the All Children’s pharmacist to please call Dr. Oshrine directly and get the authorization process started. I wrote down the prescription numbers and called our local pharmacy in the car to let them know what was happening, and to make sure the prescriptions were available as soon as they received authorization. One was available, and one was not. I asked the pharmacist to please call every branch in town to try and locate the medicine. She called me back within minutes, and told me which branch was the winner. I called our insurance agent and had her call our insurance company as well as All Children’s to speed up the authorization. On the way home from the hospital, I dropped off the paperwork at the second local pharmacy.

By this time Benjamin was feeling awful again. The Kytril alone wasn’t cutting it. He slept on the way home and vomited as soon as we walked in the door. I got him comfortable and placed the Scopolomine patch behind his ear, covering it with transparent dressing. I had told Dr. Oshrine how strange it was for me to be giving him this medicine that has such a horrific history in maternity care. He said that sometimes the most effective medicines are those that have been around the longest. The patch is designed to work slowly over three days. We will remove it Wednesday and put another one on before his admission Monday morning.

I continued my phone calls. I spoke to both pharmacies again, to our insurance agent, and finally, to Krista, the ninja nurse. I had called the clinic to follow up and make sure that they were notified of both authorizations. I explained everything to her. Within five minutes, she called back, having successfully navigated the authorizations through our insurance company. She cleared both medicines for Benjamin with ample refills for a full year. They would both be ready for pick up on Michael’s way home from work. Mission accomplished.

Benji was doing wonderfully with the new Gatorade system. He didn’t need a stopwatch, but remembered to sip dutifully every few minutes. By the time Michael arrived with the medicine, Benji had drank almost half of a large bottle. We gave him the Marinol and waited half an hour. It worked so beautifully. He wanted dinner. We ordered take-out Vietnamese, and Benji ate several bites of broth, vegetables, meat and rice. He was so happy to be eating. We were ecstatic.

Tonight I will wake Benjamin up to give him another dose of Kytril, and make sure we stay ahead of the nausea. With this combination of medicines and the three day window after methotrexate clearance coming to a close, I feel confident, for the first time this Phase, that we will have a few days of normalcy here at home before heading over the Skyway again on Monday. I feel empowered today, and I hope that Benjamin does too. We needed this.