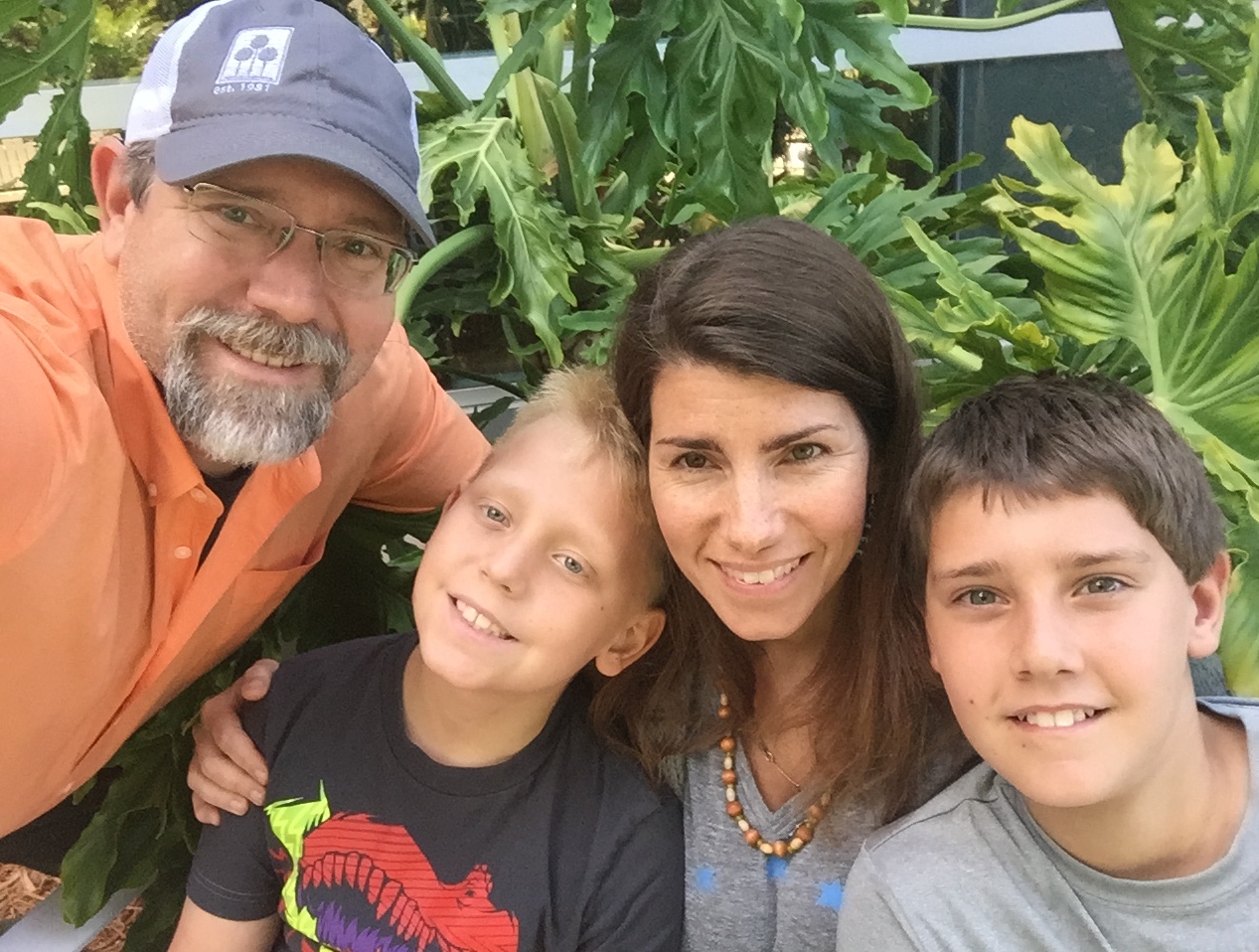 We went to the Emergency Center at All Children’s today. It was nice to sleep in our own bed last night, and we were looking forward to seeing grandmothers and aunts and cousins for Mother’s Day today. But our decision was an easy one. There was no other choice.

Benjamin just couldn’t keep anything down. Not even water, which is pretty much all he could tolerate anyway. His nausea was getting worse, not improving. Every sip seemed to come back up this morning. We know how critical it is that he stay hydrated, especially with a residual amount of methotrexate still in his body.

During a morning bath, Benjamin seemed semi-interested when I mentioned Gatorade, so I went to the convenience store and bought one of every flavor. When I came back, Michael and the boys surprised me with thoughtful Mother’s Day gifts. Benjamin handed me his gift with a sweet smile, but all I could see was the color of his face. He took sips of three of the different Gatorades, then had to stop. He vomited again a few minutes later. He wouldn’t drink water. We were out of options.

I put all mothers and sisters on hold and called the clinic. We asked Dr. Wishnew if we should come to the Emergency Center and give him an intravenous saline bolus. She agreed this was the right course of action. Benji didn’t want to do anything but sleep. We loaded up Michael’s truck, and I sat next to Benji in the backseat. I put numbing cream on his port and placed a bucket lined with plastic bags in front of him. Banyan rode shotgun and Benji slept on my shoulder between vomiting episodes (there were several). We remembered all medicines, water, phone chargers, pillows, blankets. It was only when we arrived at the ER that we realized we’d forgotten Benji’s shoes. It didn’t matter.

Benjamin continued vomiting through triage and on the bed in the exam room. He looked at me with new pain in his eyes when he was clutching his stomach. I was beginning to get worried on an unprecedented level. We tried to make him comfortable. The fluids couldn’t come fast enough. It’s an interesting thing, communicating with emergency room doctors who don’t know our son. We’re used to communicating with a team that is intricately familiar with his status. Today’s faces were unfamiliar. They don’t know his history or his medicines, his preferences, which side his port is on, even his first name.

Michael and I both felt empowered by all we’ve learned through this process, which translated into the ability to speak up for Benjamin. We told the ER nurses which size needle to use when accessing Benji’s port, both with and without the antibacterial pad. We told them where he’d need a little extra hypafix to make sure the dressing stays occlusive. We made sure his saline flush was freshly drawn, not premixed. We told them the creatinine level we were looking for and to halt on the Zofran, because it wasn’t working. There were many ways that this strange new environment made Michael and me acutely aware of how well we work together as a team, and how strongly we are fighting for our team’s youngest member.

We asked for an alternative to Zofran to try and tackle Benjamin’s nausea. We told the ER doctor (who Michael thinks may have missed his calling as a used car salesman) that our team on the 7th floor was ready to switch Benjamin to Kytril just before we were discharged. Kytril is in the same family as Zofran, and many patients find success with it. The ER team cleared the change with oncology, and added it to the orders for the day. Finally, Benjamin was hooked up to IV fluids. He slept through nearly the entire liter.

The moment Benjamin woke up was a tell-tale one. We would know if the hydration and the new medicine worked immediately by his behavior; either he would feel better, or he would wince in pain and ask for a bucket. We were so relieved when he took a big sip of water and asked for his tablet to play on just moments after waking. Clearly, the combination worked. The ER doctor (now upgraded from used car salesman status) sent us home with a prescription for the Kytril, which we were able to fill right there in the All Children’s pharmacy. This was a huge blessing, as the pharmacy only recently began opening on Sundays, and Kytril is apparently not available at your run-of-the-mill Walgreen’s.

Benjamin made it the entire way home and all through the evening without vomiting. He even ate a few little bites of soup and bread for dinner. He has remained hydrated, he is urinating regularly, and he is happy. Seriously, this is the best Mother’s Day present I could ever hope for. I was also able to be home in time to help Banyan pack for his three day trip to Big Pine Key, for “Sea Camp,” a fifth grade rite of passage. We leave before dawn to drop him off on a bus full of his friends. The kid can hardly sleep.

I missed not being able to celebrate the other mothers and sisters in our family today, because I have some serious gratitude for those women. But they are all so understanding, and I know we will make up for it another time. As a mother, I feel extremely fulfilled today, grateful that I was able to be present to care for my people. We went as a family to care for Benjamin; all of us were happy to go, because we were together, and because it was the right choice–the easy choice. We returned as a family to care for Banyan, and we share in his excitement. I felt celebrated, and I was able to celebrate each of my children in a very different way.