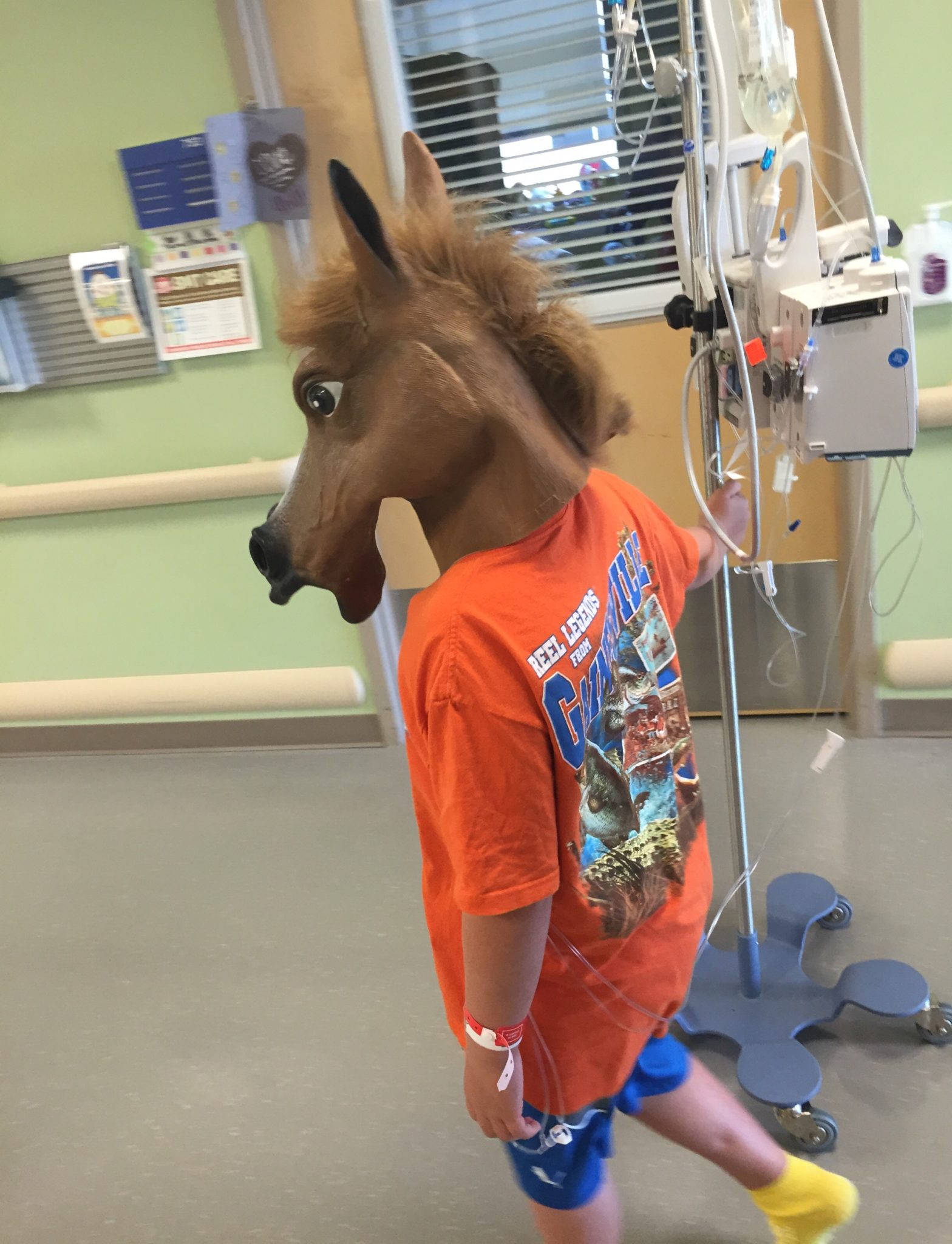 Benjamin slept all night long. I thought we were out of the nausea woods, but at 9:30 this morning he vomited again. He also developed a pretty bad headache, I suspect from the force his body has gone through.

I had a long conversation with the oncology team during rounds. We were in a holding pattern, and if the nausea continued, we would switch gears entirely; we would take him off the Zofran, and put him on a different round-the-clock nausea medicine. Instead of Benadryl for for extra support, they suggested Marinol (synthetic marijuana) which would increase his appetite. They also gave me a prescription for a scopolamine patch, should we choose to go that route.

It turns out we did not need any of the above. The vomiting episode was isolated, and Benji regained a small appetite midmorning. He ate a bread bowl from Panera, and it stayed down; but that’s all he has eaten all day. Michael brought him a wide assortment of his favorites this afternoon, but nothing seemed appealing to him at all.

Benjamin started his leucovorin at around 1pm today. This is the drug that will “rescue” his body from the methotrexate. He had a blood draw at the same time, and one again tonight, to check for toxicity. He hasn’t cleared the methotrexate sufficiently yet, though he’s on the right track. We will be spending at least one more night at all Children’s Hospital on the seventh floor.

When Benjamin threw up again this morning, I assumed I would miss Banyan’s variety show performance tonight. I could never leave Benji if he continued in the state he was in yesterday. So watching him eat the bread bowl and keep it down was extremely rewarding to me. My sister Sarah came from Gainesville to be with Benjamin while I drove to Sarasota to catch Banyan’s performance. She arrived around lunchtime, shortly before Michael, who had a meeting in Tampa today.

I grabbed a much needed shower, then we all encouraged Benjamin to get up and walk a bit. We knew this would help flush the toxins in his body. He didn’t want to at first, until we used the horse head mask Michael brought to cheer him up as bribery. This kid loves a practical joke, and I daresay many seven-year-olds could not pull off such an escapade more perfectly. He walked the entire hall with the horse head, pausing for a few subtle whinnies, and playing it off whenever anyone questioned him. We asked the nurses why they didn’t tell us about this unexpected side effect. He brought smiles to many faces on the seventh floor.

I expected to be more emotional than I was when it was time to head to Sarasota for Banyan’s performance. The calm was a clear indicator that I’d made the right decision. Benjamin was feeling so much better. We knew we wouldn’t be making any major decisions during the window of time I’d be gone, and my sister was by his side. Banyan only has one end of elementary school variety show, and has gone through a lot without us these last four months. I was so thankful we could be there to watch him, along with his Grammy and Noni.

It was, admittedly, difficult for me to relax in the school cafeteria. I kept checking my phone and checking in with my sister to see how Benji was doing. There were also like 72 million acts before Banyan’s class got on stage for the finale. Their performance had been kept a secret; it was sweet farewell to the school, and I couldn’t help crying.

While we were in the parking lot after the talent show, Sarah texted the results of the second blood draw. We knew Benjamin wouldn’t be going home tonight, but that number tells us we have to reach a new benchmark in order to leave. This could happen in the morning, in the evening, or even Friday. We have no idea.

The lesson to release expectations is another one the universe feels the need to drill into my head again and again. I thought I had learned my lesson by waiting to research Interim Maintenance until Benji’s MRD came back negative, but I still created expectations. I researched and researched to the point of expecting tht mucositis would be our biggest problem during this hospital stay. I was completely prepared to handle mucositis, and completely unprepared to handle such violent nausea. Each experience helps, and I’m glad this one is nearly behind us.

It was nice to get back over the Skyway and into this little hospital bed with Benjamin. Apparently he and Aunt Sarah had taken third place in the hospital wide bingo game, and he’d won a remote controlled car. He was tired and had zero appetite, but he was happy. We’ll be home soon.