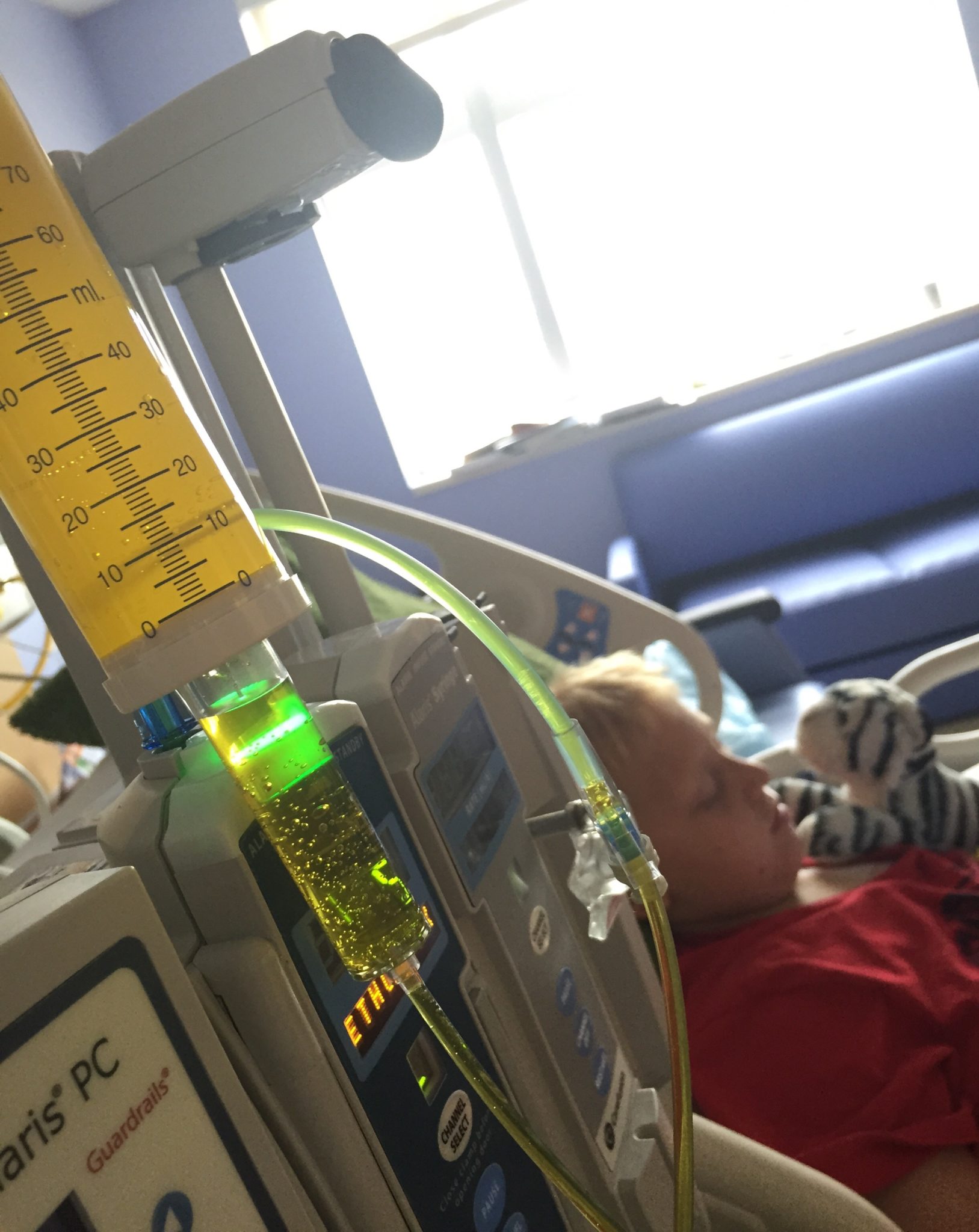 Benjamin’s pain continued through the night. At about 3am, he agreed to stronger pain relief. This was a big step for him. We both slept through the morning’s shift change.

Benji threw up three times during the first hour he was awake. He was uncomfortable and sore, but still sweet and spicy. Today’s nurse was wearing Dora scrubs, she says, in honor of Cinco de Mayo. (Is Dora Mexican? I don’t remember that episode.) For the rest of the morning Benji called her Cinco de Mayo. She laughed, which made him smile, so I’ll give her a pass on the cultural faux pas.

On Tuesday the doctors do grand rounds. I saw them circling a few doors down and quickly washed my face and attempted to appear presentable. They were almost to Benji’s room when I poked my head out, and Lauren, the ARNP, caught my eye. She came asked how we were doing, and I voiced my concerns about yesterday’s lumbar puncture.

Lauren opened the door to check on Benji. In the two minutes I was on the other side of the door, he’d gotten out of bed and walked to the bathroom! I was so relieved. I was also grateful for the opportunity to speak to Lauren alone, and let her know that I would have liked to been told immediately about the second puncture, or about anything that deviates from the plan. I felt clearly that something happened during that procedure that caused Benjamin unnecessary pain.

Dr. Hale had no answers. He checked Benjamin for any symptoms that would indicate a spinal headache, leakage, or pooling of medicine. Maybe it was his positioning, maybe muscle tissue, maybe this, maybe that, he said. Other moms have reported back pain with some punctures and not with others. Dr. Hale can’t know exactly what happened between those vertebrates, because he didn’t do the procedure. But I will discuss it with Dr. Moore when we see him next, and with every physician I see strapping gloves on when I leave Benjamin in the operating room from now on.

Benjamin was feeling better after rounds, so we shared a bagel for breakfast and played games on the couch by the window overlooking the Skyway. This was short lived. Soon he wanted to get back in bed, and a little while later his nausea returned. I lost count at thirteen episodes today.

I lay in bed next to him and we started coloring a mandala together. Soon he turned his head and rested it on the pillow. I grabbed my phone and put some sweet music on low, then continued coloring. He fell asleep, and I joined him for a midday nap we both desperately needed.

Michael arrived around 3pm. Just the sight of him gives Benji strength. He felt good enough to take a few shots with some ping pong balls and a Pringles can, then his nausea returned. We tried to make him as comfortable as possible, but not much was working.

We talked to our nurse about other options. Clearly Zofran wasn’t enough to help Benjamin combat the effects of this high dose methotrexate. Our nurse gave us a few alternatives. The next one down on the list of doctor’s orders was Benadryl.

Benjamin’s association with Benadryl is that they gave it to him when he had an allergic reaction to PEG-asparaginase, and when he woke up, he’d missed an entire visit from his family. He wants to be able to fall asleep and wake up on his own terms. I completely respect his autonomy, and I believe it’s critical to his strength in this process. So it’s our job to explain to him the risks and benefits of his options so he can make the best choice for him.

Finally he agreed to the Benadryl, but at a reduced dosage, and only when he was ready to go to sleep. A sound compromise. He and Michel played video games while I plunged myself onto my yoga mat, eliminating tension from many sources. Michael’s mother and sister arrived a little later with Banyan, with gifts, and with dinner.

Benjamin had gone a couple of hours without nausea, and had even requested soup for dinner–a positive sign. But when the food arrived the smell was too much. Kathy and Gana put it outside the door. Benji vomited at least three times while they were here. They were, as always, patient and loving, helping us find his water and paper towels and cool washcloths for his face.

Finally, at about 7pm, the 24 hour drip of high dose methotrexate was empty. We asked the nurse if we could have a few minutes after she unhooked the medicine to get him into the bathtub and change his clothes. Michael helped Benjamin bathe, the nurses changed his linens, and I took the opportunity to walk down the hall with Banyan. We talked about his week, which contains some big moments I may have to miss. I’m so thankful for his understanding when I can’t be in two places at once.

When Benji got out of the tub he was very ready for bed. Everyone said goodbye, and he dutifully accepted his Benadryl. He slept soundly until 10pm or so, when he woke up and vomited again. The night nurse and I concocted a plan to get his oral chemotherapy timed as optimally as possible, and hope it stays down. He is sleeping again now.

This was easily one of the toughest days on Benjamin’s body since diagnosis. We have many things to consider for our next extended stay on the seventh floor. I’ve talked to several nurses now and posted in the online moms’ group. There is no easy answer. We don’t know if the extreme nausea is a result of the high dose methotrexate alone or its combination with the LP and vincristine. We don’t know which anti-nausea medicines down the list to try preventatively next time. One nurse even suggested a scopolamine patch. Some moms have had great success with it. All I could think about was the potential irony of giving my son the same medicine used to put laboring moms into twilight sleep in the 1950’s.

We will wade through all of these options with the doctors, nurses, other moms, and most importantly, Benjamin. He has to go through this high dosage three more times over the next two months. I want him to feel empowered, not disheartened. Many times today, I watched the neon liquid dripping into his body. I thought about what that it is designed to do. I felt guilt push its weight on me.

We were in such a mode of celebration just a few days ago. If this sudden shift feels counterintuitive to me, I worry that it has the potential to be confusing to a boy who has walked his path this far with such determination and confidence. All I can do is hold him while he’s hurting and tell him what an amazing job he’s doing taking care of his body. I hope the words, like the medicines, permeate into the hiding places.

Tomorrow Benjamin will begin the rescue drug called Leucovorin. His blood will be tested multiple times to check for residual levels of methotrexate. We could go home tomorrow night, or we could stay a day or two longer. We have no idea. I hope for a good night’s sleep and a much easier day on Benji’s body tomorrow.