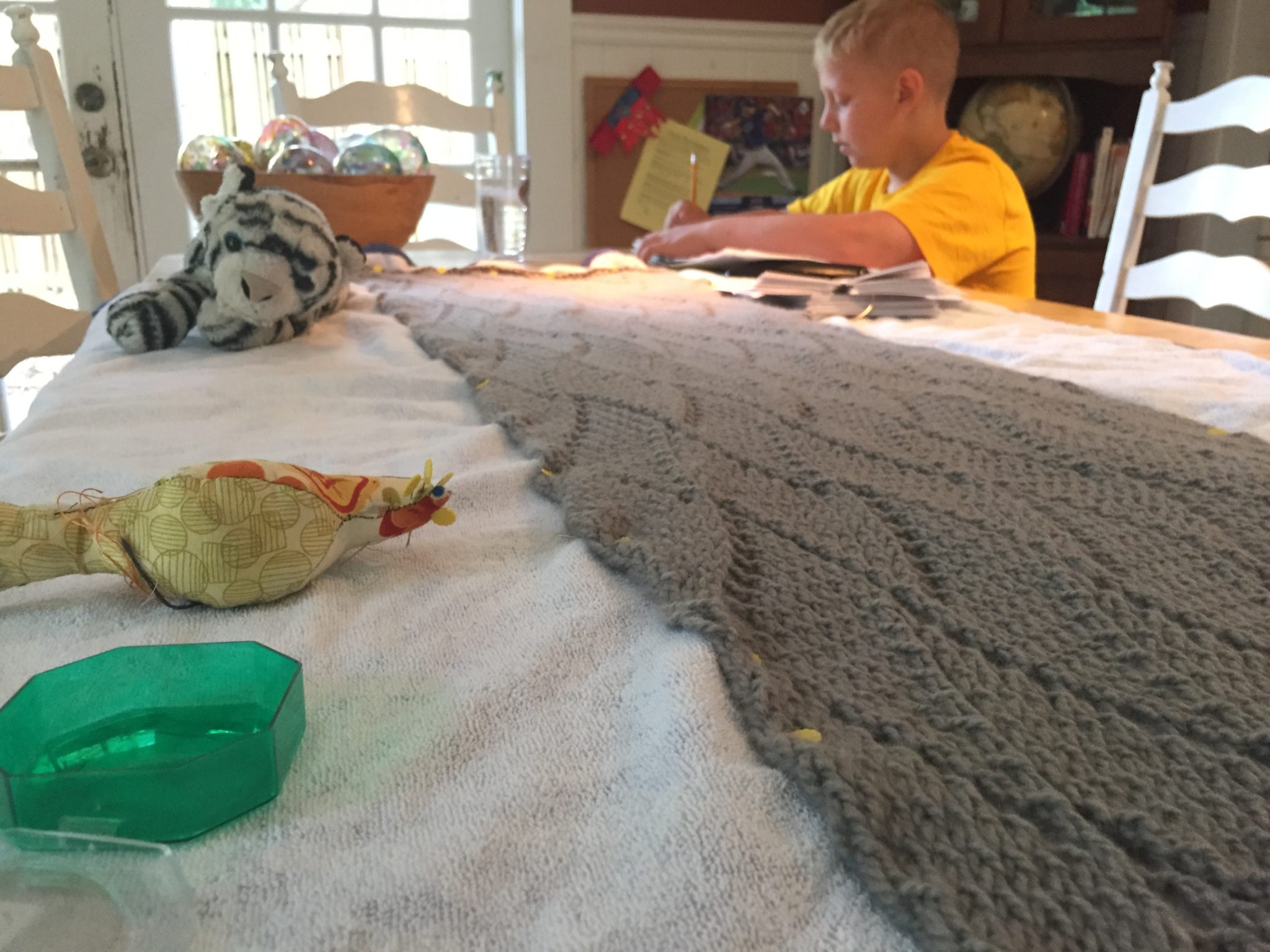 We are STILL waiting.

I am thankful that we are all learning the lessons we need to learn along this journey. Apparently, the Universe feels the need to pound them repeatedly into our stubborn souls.

I began the day up on the Ringling Bridge. It was crazy windy. I allowed the wind to carry away the heaviness of the waiting. The wind also carried away the humidity, making way for an absolutely gorgeous last day of April. Benjamin and I spent as much time as we could outside today, though I made sure to stay within range of our house phone. We called the clinic again this morning and left a message. We were hoping they would be able to give us a time to expect The Call, so that Michael could be home. Then, we waited. Again.

When it was time for Benjamin to finish his schoolwork for the week in preparation for Mrs. West’s weekly visit, he was extremely resistant. Almost tearfully so. He had only two assignments left, an easy task; but his demeanor was uncharacteristic. Eventually he plowed through with beautiful work, while I blocked the wrap I’d been knitting since early in his diagnosis. I am hoping to call it The Remission Scarf. I discussed Benjamin’s behavior on the phone with Michael later. We wondered if he was feeling some of this tension that is becoming harder and harder to keep out of our house. I don’t see how he couldn’t. As much acceptance as we are trying throw at this outcome, we are still waiting. And that feels uncertain to anyone.

After Benjamin finished his work, we walked down the street to our friend’s house for a Pilates lesson. Once again, Benjamin loved it. I felt myself relax watching his body stretch and move with control. I can see how strong he is.

Just before lunch, one of our nurses called. She said that one of the two bone marrow tests was in, but not the other one–they were still waiting for the biggie, the flow cytometry, or Minimal Residual Disease (MRD) test. She assured me the results would be in some time in the afternoon. We set a window of time for the doctor to call, with the caveat that if results came sooner, to please forgo the window and pick up the phone.

Benji and I hurriedly ran the few errands we had to run outside of the house, so that we could be back in time to catch the phone if it should ring early. (Ha.) We made lunch and enjoyed it outside. He had some screen time while I worked a while, then we played outside for the rest of the afternoon, until it was time for Mrs. West to arrive. As the afternoon grew later and later, I felt my resolve crumbling. I was allowing worry to creep in. What if it’s taking so long because it was a bad sample? Will he have to have another bone marrow aspirate? With more waiting? Will that be too long of a chemo delay? I found myself staring at my boy. If there are undetectable leukemia cells still in his body, where are they? My pictures of perfect marrow in their perfect vials were getting harder to see. I was slipping.

When the window of time we were promised arrived, Michael came home, picking Banyan up along the way. Mrs. West arrived a few minutes later. I was so distracted while Benjamin was working with his patient teacher. It was nearly 5pm. I kept checking both phones, which were inches from my hand.

Finally, the phone rang. I left Benji with his teacher and walked outside with Michael, then hit the speaker button. It was one of the physician’s assistants we’d met a few times before. I am sure Michael and I both looked up at the sky with the same exasperation when she said the results still weren’t in. She said the pathologists were extremely busy this week with a lot of bone marrow testing, and that Benjamin’s was first on the docket for tomorrow. I started asking questions, hearing my own voice sounding irrational. I was allowing anger to come in. We have a clinic appointment in the morning. Will the results be in by then? Because if the MRD is negative and Benji makes counts, he goes down for a lumbar puncture. That means no breakfast. How can you be sure we’ll have results? How long does a vial of bone marrow last anyway?

The physician’s assistant was patient, albeit a little gruff. She was careful to tell us that the delay had nothing to do with the quality or outcome of Benjamin’s sample, but simply the volume of tests the department had to run. She assured me the results would be in while we are in clinic in the morning, and encouraged us to pack a bag as if we were staying in the hospital for the weekend.

I was still processing all of this when a sweet friend dropped off an absolutely delicious meal. It was the last in our very long and generous meal train, one that has sustained us for four entire months. I tried to reclaim some inkling of control over everything as we ate, insisting on acts of gratitude. It wasn’t working. I was still angry.

I had a late meeting after dinner. It was hard to concentrate. I walked out of the meeting right at sunset, and the sky was spectacular. I knew I needed to get home and pack for a potential hospital stay, but my car was on autopilot back to the Ringling Bridge. It was imperative. I parked below the bridge and ran up the steep incline to the pavement, feeling the same wind that came to my aid this morning. The sky looked windswept. Back under the bridge, I walked around one of the giant concrete piers holding up the roadway and the wind rushed right at me, relentless. I asked it to wash the anger away. I sought gratitude again, and this time it worked. I gave thanks for escaping the end of Consolidation without a hospital stay. I gave thanks that regardless of tests or numbers, my boy is a healthy, sassy, vibrant, physical, stubborn creature. I thought of the families whose samples of bone marrow were tested before Benjamin’s this week, and realized that they were all floating in the same suspension of discomfort. With the wind, I released the temporary notion that I was somehow in control of any of this.

I returned home to put the boys to bed. Bedtime is question time for Benjamin. It felt somehow right that the intensity of this day, with its unknowing and its powerful winds, would compel him to form the words I knew would come one day. “Do people die from leukemia?” I cannot lie to him. He needs to be in control. He needs to be armed with the knowledge he seeks. I said yes, people can die from leukemia, but it is very rare, because there are many people who have devoted their entire lives to developing the medicine that is healing him. He accepted this easily and we moved on to Roald Dahl, and The BFG. I exhaled.

After our chapter, Benjamin asked, “If I had never gone to the doctor, would I die?” This required some silence. How can I be honest without planting seeds of fear? I told him that I could never say for sure what would have happened, but that I was very grateful to be living in this time, with these medicines, and very grateful that his body showed us exactly what to do. I reminded him how he rode his bike and his scooter for hours today, and completed two tests and a writing prompt. His body and mind were working perfectly. One last question: “Will I still have leukemia when I die?” This one, I was grateful for. “No! That’s the beauty of it. You will live a long and healthy life, just like you would have if you never got leukemia. Only you’ll see the world in a totally different way. Everything will be more beautiful to you. It will be like a secret you share with the Universe.” He liked that. He fell asleep, feeling perfect, feeling like my perfect child.

“The matter with human beans,” the BFG went on, “is that they is absolutely refusing to believe in anything unless they is actually seeing it right in front of their own schnozzles.” -Roald Dahl