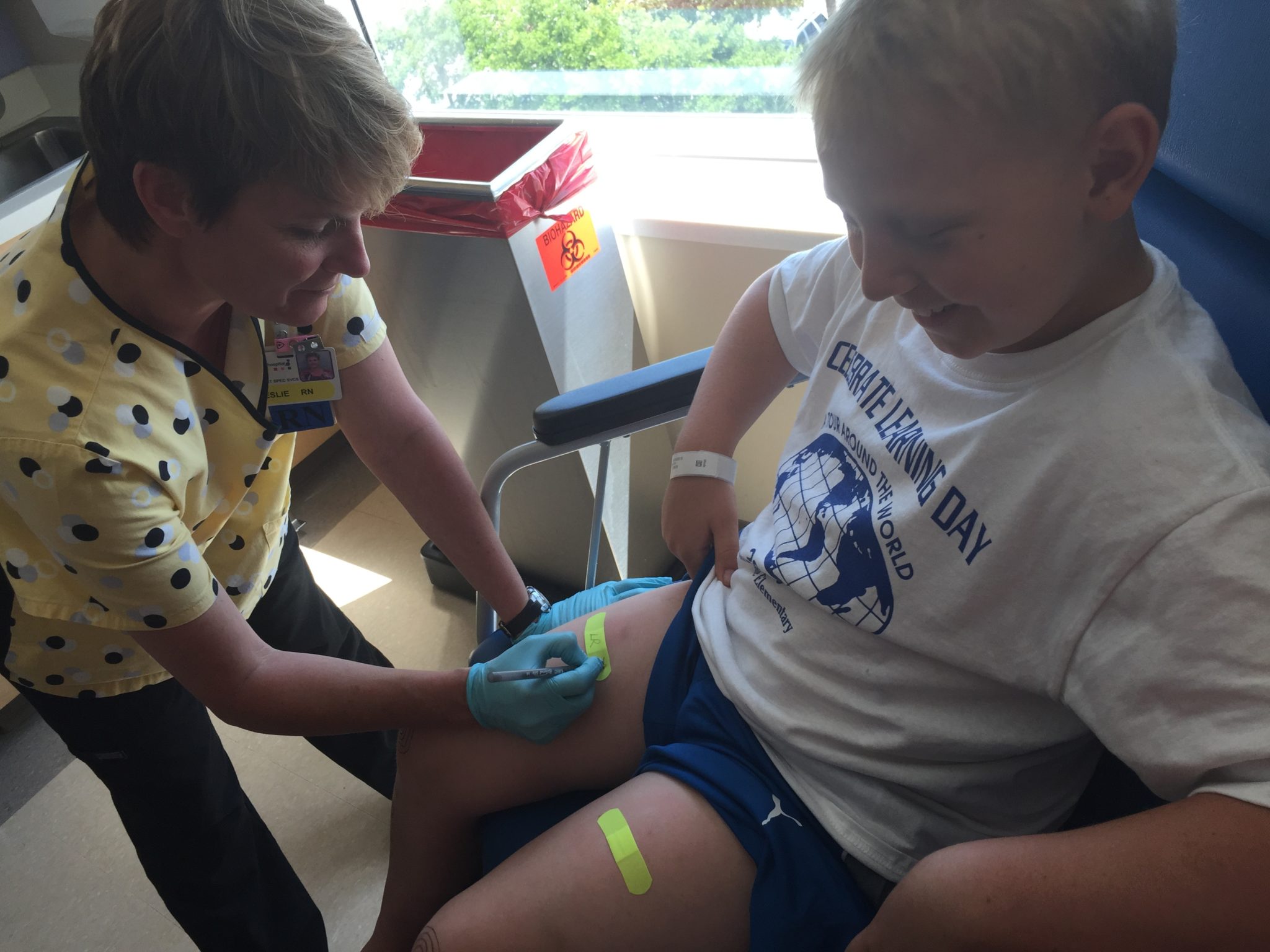 I put numbing cream on Benji’s legs this morning as I was idling in the Southside carline, dropping Banyan off for his second day of state standardized testing in science. He’ll also have two days of testing in reading next week, and two days of math the week after. I know he feels the pressure. I’m trying to keep as much of the uncertainty of these next few weeks away from him, and be as present as possible as his elementary life comes to a close. This is a big chapter for him, and I recognize that completely.

Benjamin and I listened to Wonder as we crossed the Skyway. He loves it. He said he wished that August was real so that he could meet him and be his friend. We counted one eagle and two ospreys on our morning drive.

We arrived at the Infusion Center and saw Dr. Grana almost immediately. We discussed Benjamin’s low grade fever of yesterday, and his dilated pupils. Nothing rattled her. She examined his eyes, his belly, his heart, and said, “Looks okay to me.” Not exactly the thorough explanation I was hoping for, but her confidence and calm was oddly reassuring, nonetheless. The moms’ group online validated my pupil dilation concerns, reminding me that this happens after Vincristine all the time. Thanks, mamas. There wasn’t a complete blood count listed on Benjamin’s orders for the day, so I made sure to request one from Dr. Grana. I know that Dr. Oshrine had wanted to watch the trends in Benji’s numbers. Obviously Michael and I do too. So Dr. Grana added the count, and the nurses came in with the necessary equipment to collect the milliliters from my boy’s body. Each vial tells us so much, yet holds so many mysteries.

Benjamin’s platelets continue to rise, and his hemoglobin continues to hold, but his absolute neutrophil count (ANC) has dipped to a “profoundly neutropenic” 202. Even though this places him at a higher risk for infection, I feel strangely relieved by the number. It explains yesterday’s fever and aligns with the behavior this last cycle of chemotherapy is intended to provoke. This is his nadir period, it was just delayed. Friday’s number will be very telling. It will allow our oncology team to either schedule Benji’s bone marrow aspirate, or put us on hold for a little break. Honestly, I will feel comfortable with either path. I’m learning acceptance in such a big way these days.

We waited more than two hours for Benjamin’s Erwinia shots to arrive from the pharmacy. Sometimes they are sent almost instantly; sometimes, emergencies happen, which cause delays; and sometimes, medicine is simply delivered to the wrong department. This was the case today. Our appointment was at 9:30am, and Benji didn’t get his shots until 12:04pm. We were okay with the wait, but the Infusion Center nurses seemed agitated. They didn’t find it acceptable that our boy should wait so long. They are so endearing and compassionate. How can we thank them? Granola won’t cut it.

Benji took his shots with his usual bravery, collecting himself with an innate ability well beyond his years. Since he gets two shots at a time, one in each leg, there are always two nurses who administer the medicine. Today, one of the nurses who sees him less frequently said, “I think you’re the bravest kid I’ve ever seen.” I gave him an “I told you so!” look. He doesn’t know how brave he is. He just is. When the needles were removed and the powerful medicine was coursing through the muscles in his thighs, the nurses placed day-glo bandaids on the points of entry. Benji requested their signatures on each of them. He helps them to laugh. They help him to heal.

One bonus of the pharmacy’s delay in delivering Benji’s medicine was extra time to finish schoolwork; another bonus was seeing Benji’s new friend Cody, who had an early afternoon appointment. He wasn’t feeling so great today. Benji understood. Since we said goodbye this afternoon, I’ve thought a lot about him, and about his mom, with whom I’ve developed an instant friendship. They’re ahead of us in treatment, so I have already learned so much from her about what’s to come. We both take comfort in this odd connection. I wish we didn’t share this bond. I wish we hadn’t met this way. But we did, and I’m so grateful.

I’ve continued to research liver detoxification since receiving Monday’s disarming chemistries. Milk thistle has shown up again and again in my research, backed by hefty studies. I’m still waiting for Dr. Oshrine’s blessing, but what I’ve read is solid, and I wanted to go ahead and buy the stuff. So on the way back in to Sarasota, Benji and I went to Whole Foods. His ANC is low, so we sanitized, I reminded him to put his hands in his pockets, and we steered clear of congested aisles. As soon as we walked in, he saw a tray of oranges available to sample. He made a bee line, and I stopped him in his tracks. He can’t have samples anymore. It was a defining moment for us. He felt instantly sad, clearly reminded of the things he couldn’t do now, and of how different he is, much like August in Wonder. His default was to take it out on me. He crossed his arms and pouted his face, and stayed behind me in the aisles. I told him he could take it out on me all he wanted, and that I understood how frustrating it must be. Eventually, he softened, accepting my peace offering of a California roll from the sushi section. In the car, I praised him. Ultimately, he handled the whole scenario so maturely.

We arrived at our sweet blue house just ten minutes before Mrs. West came for her weekly visit. Benji focused for nearly an hour and a half with her today. He started getting fidgety and restless toward the end of the session–but he did beautifully on the tests she administered, and he continues to be ahead of schedule. I remain in awe.

I give thanks for yet another delicious meal we did not prepare tonight. This one we enjoyed with Michael’s mother and sister, who have been so overwhelmingly supportive. I was reminded tonight how lucky we truly are. There are so many people going through this diagnosis with zero support. We have so much support that it overflows.