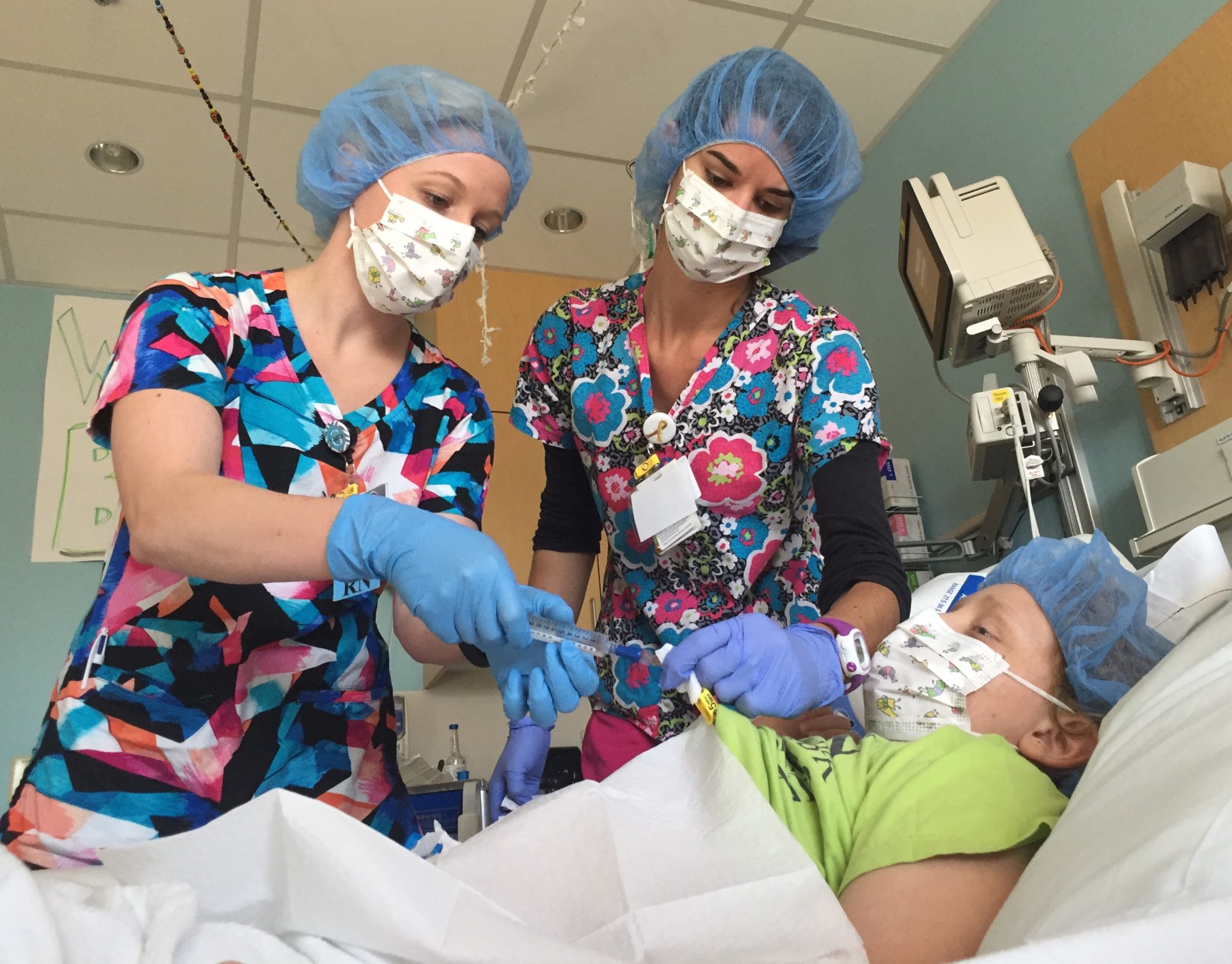 Benjamin woke up early this morning with a high fever and tummy pain. He vomited during shift change a few minutes later. It was a strange, dark, pungent liquid. There were many hands here to keep him as comfortable as possible. He begged for a bath, so the nurses unhooked him from his fluids. I put Press ‘n Seal over his port, rolled up a towel behind his head, and helped him carefully recline in the tub. The relief washed over both of us.

Once Benji was back in bed with fresh linens and clean clothes, more blood was taken from his port. It had been over 24 hours and his fever persisted–this morning at 103–so protocol dictates another check for bacterial growth. He was very sweet this morning, despite feeling so yucky. The nurses gave him Tylenol for fever and Benadryl for his tummy pain, and he went back to sleep. His fever broke while he rested.

The nurses and I proceeded with the more routine part of the morning. Benji’s urinalysis from last night was negative for bacteria, so no infection there. I am hopeful that it is simply the large volume of antibiotics coursing through him that is responsible for this tummy and urination pain. Benji’s lab work showed a decrease in white blood cells, and his absolute neutrophil count (ANC) is back down to zero. His platelets are at 5,000, which I expected; fevers eat platelets. I’m not discouraged by the drop. The number that gave me a little smile this morning was 23%–his blast percentage. Less than half of yesterday’s. I did an inward cheer for Benji’s spleen. I knew you could do it.

Morning rounds came and went while Benji slept. The new attending physician proposed a few things to make Benji more comfortable and increase his protection from infection, including a second antibiotic to cover different bacteria, resuming his antiemetic every twelve hours, and beginning a urinary anesthetic. We agreed to the first two and declined the third (Benji’s choice). She also proposed a viral swab to test for flu, specifically; it’s the only virus they can really treat. If he’s positive for rhinovirus (which I suspect), nothing would change. He is in isolation now, and will be until he’s fever free for at least 24 hours.

The elephant in the room was finally addressed after all other matters were discussed. The ARNP who joined the physician for rounds said that Dr. Oshrine was going to come and speak with me, but that first, he’d requested another panel from the folks in Washington. He wanted them to test Benji’s cells for the CD22 protein. I had looked for that one specifically on yesterday’s report, because I know that CHOP has a newer clinical trial available using CAR-T cells to target CD22 instead of CD19. I didn’t see anything listed. So with the additional panel came hope. If the cells all showed CD22, then maybe we would be heading to Philadelphia after all.

When I am granted an emotional release, it is always unexpected, and I am always so deeply grateful for it. I experienced such a moment today. Just as I sat down after rounds, my phone rang. It was Banyan. He doesn’t have school today, so he went to a jobsite with Michael on Manasota Beach before they crossed the Skyway. He was calling to FaceTime with me as he walked along the beach looking for shells. His thoughtfulness and the beauty of the ocean and the sunshine on my smiling boy’s face all conspired together to allow me unstoppable tears and sweet relief, like a pressure valve being opened. My whole body feels different now.

Benji’s second antibiotic was hung while he slept. When he woke up, his belly still hurt, and he asked for a bath immediately. While he was in the tub his face started to turn bright red and his head started to itch. Our nurse told me this could happen. It’s a common side effect of the medicine and even though it’s considered an allergic response, it isn’t a precursor to anaphylaxis. Benji was given another half dose of Benadryl to alleviate his symptoms, and the medicine continued to drip.

Michael and Banyan arrived after Benji was back in bed. They stayed for the rest of the day. It was wonderful to have some normalcy in the room. Benji’s fever rose again and broke again with more Tylenol in the afternoon. The swab to test for flu was negative. As the afternoon turned to evening, Benji started to feel better. He tried to eat a few different things but only had a bite of each. Nothing was tasting good to him. But his spirits were rising.

Dr. Oshrine came in just before Wednesday Bingo (which Banyan won three times). Our room was full of Child Life specialists, so the boys were pleasantly distracted. Dr. Oshrine confirmed what we’d suspected yesterday. The CAR-T trial targeting CD19 is officially off the table. He was careful to tell us that the Blinatumomab was not to blame. The theory is that Benji had a resistant population all along, small and undetected by flow cytometry. While the Blinatumomab was working to eliminate some of the CD19 positive cells, the CD19 negative population was able to flourish, with no medicine to combat its growth. He wanted to reassure us that the Blinatumomab wasn’t responsible for Benjamin’s ineligibility for the trial; rather, if we had proceeded with the CAR-T calls targeting CD19, the same results would have likely ensued, and much more time would have been lost.

The panel Dr. Oshrine requested searching for the CD22 protein came back positive. To me, this means hope. Dr. Oshrine is in communication now with CHOP to see if Benji can shift his application for the CAR-T CD19 trial over to the CAR-T CD22 trial. He is less familiar with the specifics of this trial, as it is much newer and less established. But it’s an open trial, conducted by the same folks running the CD19 trial. And it’s hope.

Time is obviously of paramount importance. Dr. Oshrine searched for other open trials at other centers, but found none that are compelling for Benjamin’s unique situation. If the CD22 trial is not available to Benji, for whatever reason, or if the time frame is longer than the physicians at both centers would like, then there is a backup. It’s a medicine called Inotuzumab. It also targets the CD22 protein. There are currently clinical trials with the medicine in adults that are promising, though it isn’t available or studied in children. However, Dr. Oshrine is confident he could access the medicine through a compassionate use request, as he has done in the past. As we understand it, both the CAR-T trial targeting CD22 at CHOP and the compassionate use of Inotuzumab are being pursued now for Benjamin. The one that presents itself as the best option is the one we will follow.

So, for the next few days, we wait. Benjamin’s counts must recover and his platelets must be under control in order for anything to proceed. He’s been asking when we can spend some time at home, and I can’t give him a solid answer. I still believe if we can get his ANC and his platelets under control, we might be granted some time away. Dr. Oshrine isn’t thrilled that there are blasts in Benji’s blood, of course, but he feels that things are currently manageable. Benji’s marrow is just exhausted. It may take a while to rebound. And when it does, it is likely to produce more blasts. At that time, another management round of chemo may be necessary, which may interfere with the demands of this new clinical trial. Timing is everything.

We wanted to be having a very different conversation today, one that was focused on CD19 and T-cell collection and plane tickets to Philadelphia. But once again, a new path is forming, and I’m so thankful for it. I felt hope today. I looked at my boy and the belief that tried to escape returned, as if it had just floated upward for a bit and was pulled back down by gravity, right where it belongs. We can wait until Friday for more news from CHOP. Tomorrow, we will nourish and nurture each other and give big, deep thanks.