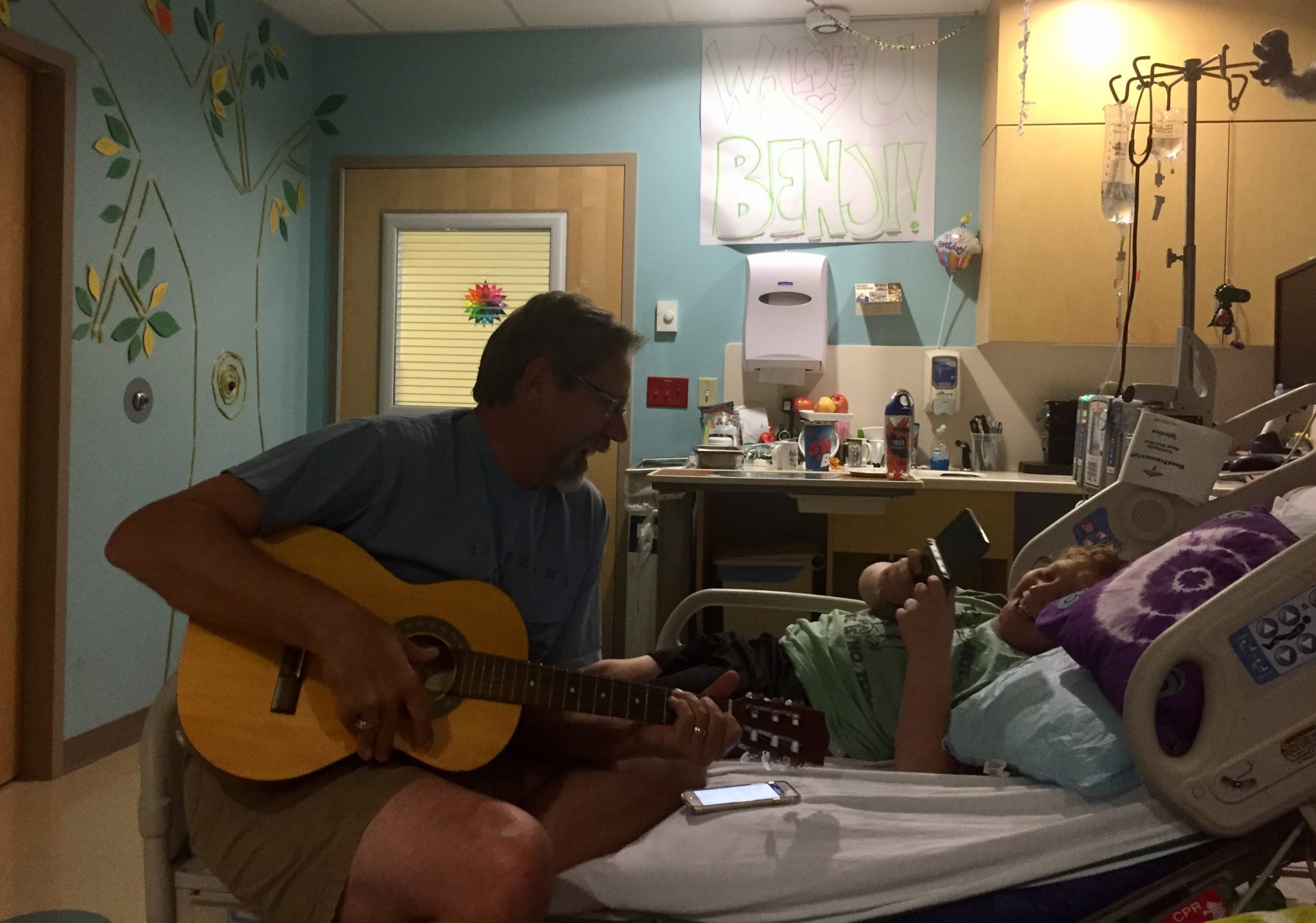 It was a very busy day up here on 7 South. I was pouring my first cup of coffee when the phone rang. It was the nurse navigator for the CAR-T trial at the Children’s Hospital of Philadelphia. Benjamin had just woken up, and nurse after nurse was coming in to say hello to him. It was good timing. The room was noisy but Benji was distracted, and I could give the conversation my full attention.

The nurse was very kind. She said first that the most common barrier to enrollment–insurance authorization–would not be a problem for us, thankfully. Our clearance was swift. The next step to enrolling Benjamin in the clinical trial is careful review of all of his medical records, which is well underway. She said that in general, Benji seemed like a good candidate, and that Dr. Oshrine had sent the team at CHOP everything they would need very quickly. The only piece missing now is another sample of cells through flow cytometry. The last time Benji’s cells were analyzed in this way was after his most recent bone marrow aspirate, when he was still on Blinatumomab. Because the medicine was binding to the CD-19 that the CAR-T cells will be targeting, they want to be absolutely sure that the population still contains enough of the protein for the immunotherapy to be effective. A vial of Benji’s blood was sent to the University of Washington this morning to complete this part of the process.

If Benjamin’s cells are still CD-19 positive, which everyone expects, then we can move forward. He will need enough lymphocytes to ensure an adequate T-cell harvest. We learned to watch a new number on Benji’s morning labs: his ALC, or absolute lymphocyte count. Right now this number is hovering around 300. We need it to be above 500. This is only one piece of the puzzle. Benjamin’s medicines must be carefully balanced to manage his disease, minimize his risk for infection, and allow for harvesting his cells at the optimal time. We will not be going to Philadelphia until his counts recover from this round of chemotherapy and all other parts are in place. The nurse said that one of the most challenging parts of this exciting new therapy is “catching this window.”

With all things considered, the “window” isn’t opening as soon as we’d like. The nurse said the first available manufacturing date is in January. Assuming Benji’s cells are CD-19 positive, this means we will most likely be traveling to Philadelphia in early to mid-December for our initial consultation and Benji’s T-cell harvest. The cells would then be frozen until they can be manufactured. If that date is indeed in January, then the earliest we would go to Philly for infusion is mid to late February. Three months from now. Three months to keep Benjamin’s disease, immune system, blood levels, chemotherapy, and organ function in perfect balance. It is intimidating, to say the least.

I thanked the nurse and mentally added her to my once daily email list. We carried on with the business of the day. Benji’s morning labs showed a slight increase in white blood cells and absolute neutrophil count after last night’s Neupogen. His hemoglobin was at 7.2, just above the transfusion threshold, and his platelet level held at 3,000. His blasts also increased to 18%. I had to stop myself from panic and do the math: when multiplied by the total white count, the absolute number of blasts was essentially the same. This is not a trend. It’s one number. All signs are clear that the chemotherapy is working to keep Benji’s disease under control.

Benji woke up with mouth pain this morning. He has a baby tooth that is beyond ready to come out. The adult tooth is already well on its way in, and it has nowhere to go. It is irritating his gums and cheeks now. Our wonderful dentist did some x-rays before this admission and found no abcesses or cause for concern, but she said the baby tooth needed to come out. Now, with Benji’s platelets so low and his neutrophil count teetering around neutropenia daily, I am paying close attention to this situation.

I pointed out the tooth to our new attending physician. He requested a panoramic x-ray, suggested a prophylactic round of Clindamycin, and told us not to pull the tooth. I like this new doctor more by the day; he is very good with Benji and even wore a balloon hat during the exam this morning. But prophylactic antibiotics didn’t jive with me, at least not yet. I understand his concern. If the tooth comes out, he sees an opportunity for bacteria to enter the bloodstream. But there is no infection, so he agreed to hold off on antibiotics for now. The tooth is coming out one way or another, sooner or later. I hope it’s sooner. We can use antibacterial mouthwash when it happens. I feel like the risk will only increase the longer it stays.

The new physician also wanted to discuss Benji’s platelets. Right now, his inability to absorb platelet transfusions is the main thing keeping us up here on 7 South. Theoretically, if we could get his platelet absorption under control, we could manage his leukemia on an outpatient basis as we prepare for Philadelphia. Benji’s spleen remains enlarged and painful, so we believe that his platelets are still not able to be funneled through the organ properly. To begin ruling out other explanations, the attending physician ordered a platelet transfusion today with a blood draw immediately afterward, including specific antibody tests to be sent to the lab. These tests will tell us if Benji is experiencing any platelet refractoriness.

After rounds, a Child Life Specialist came to find Benji and tell him that it was time for his cooking session. We went down to a kitchen on the fourth floor and found all of his requested ingredients waiting for him. From start to finish, Benji made a gorgeous dish of poblano peppers stuffed with sausage, onions, potatoes and cheese. We had a great time. While the peppers were cooking, however, Benji’s abdominal pain returned. We had to go back upstairs and get him in bed. The Child Life Specialist delivered his finished product a few minutes later. Benji didn’t have an appetite, but he proudly served them to the nursing staff, who gave him rave reviews.

Next it was time for Benji to go back downstairs for his dental x-ray. He was tired, so we took him in a wheelchair. He was so patient and so still. The images showed no change since his last x-ray. The tooth just needs to come out, and not cause any problems when it does.

Benji’s platelets were ready when we returned to the seventh floor. It was the first chance he’d had to really rest today, and we appreciated it. Michael arrived while the platelets dripped. Right on cue, Dr. Oshrine walked in a few minutes later. We filled him in on the conversation with Philadelphia. He seemed a little surprised by the timing, but he didn’t feel that the new schedule warranted a deviation from the plan or a switch to a different center. Michael and I were both thinking about the amazing connections that have been made on our behalf, wondering if it’s time to call on them now. I began with an email updating our new advocates.

Banyan spent the night with a friend tonight, and Michael, Benji and I had a sweet, quiet evening up here on the seventh floor. Benjamin’s abdominal pain returned as he was falling asleep. It seemed a little more intense than it was earlier in the day. I thought of the platelet transfusion. It did give him an immediate boost, up to 11,000, which points to the problem being in the spleen as suspected. I’m grateful for the comfort that warmth brings him, and grateful he is sleeping peacefully now.

I believe that Benjamin’s cells will be harvested, manufactured, and infused at the perfect time for his complete healing.