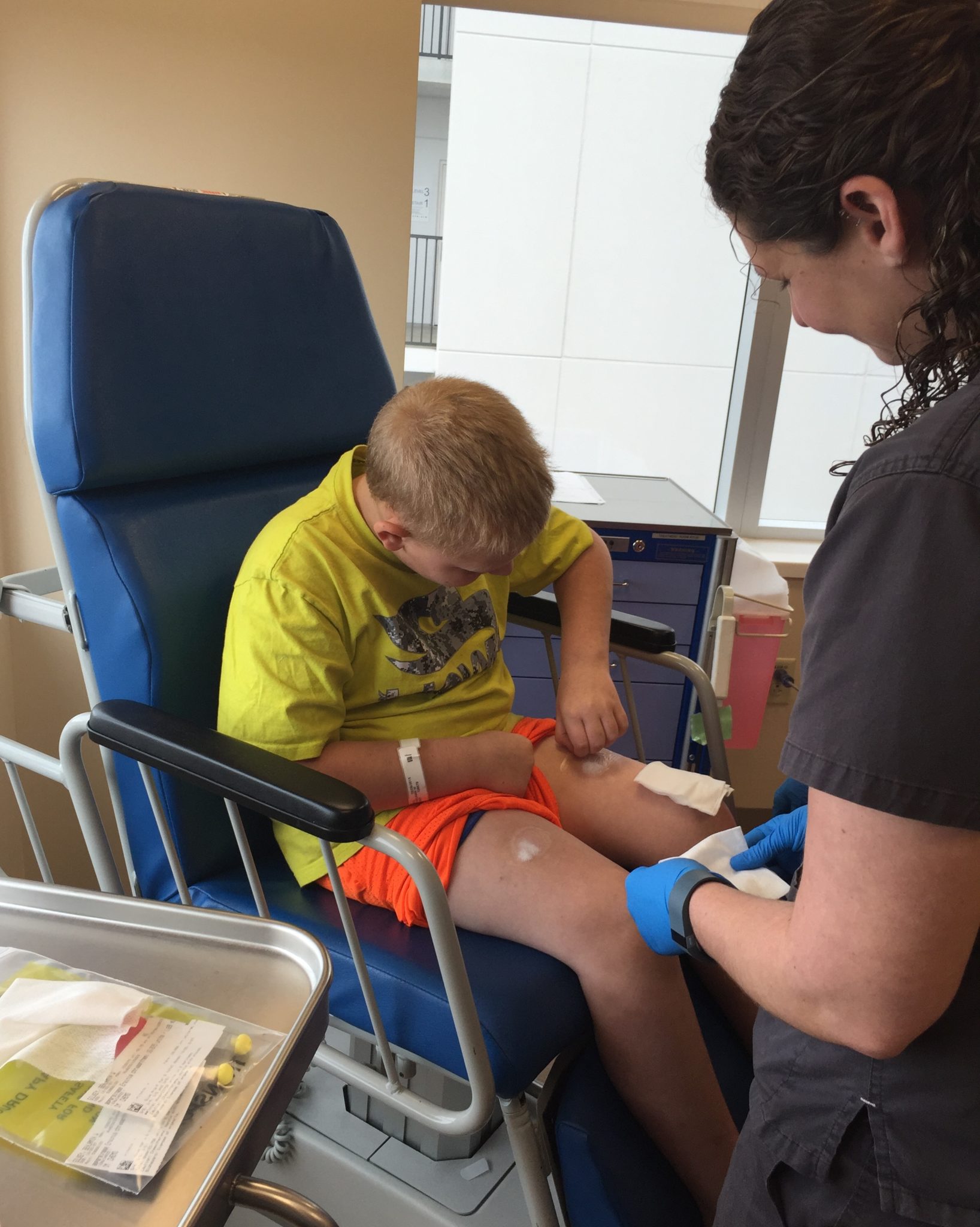 The nurses in the Infusion Center started dancing as soon as Benjamin walked through the door this morning. There were nurses from another section who’d heard about him and visited our treatment cubicle just to dance for him. They all request dances from him in return, but he just laughs. He brings laughter wherever he goes.

Before we drove over the Skyway for today’s shots, we put lidocaine on Benjamin’s legs. We’ve used Glad Press ‘n Seal to hold the cream in place until now; it’s worked very well, but Benji is tired of its incessant crinkling and eventual looseness. When we stayed in the hospital last week, the nurses had used individually wrapped transparent dressings for the job. I asked to borrow one, and when we came home, I found a box of 100 online. We tried them for the first time today, and they worked perfectly. I was thrilled. Every little bit of comfort helps.

Benjamin went to bed last night and woke up this morning complaining of pain in several places throughout his gastrointestinal tract. So, my first questions to Dr. Moore were about the possibility of mucositis. Unfortunately, my suspicions were correct. Benji’s symptoms are quite mild, and we’ll do our best to keep them that way; we know they can worsen quickly. Until his neutrophil count is up and his mucosal lining is strong again, the risk of mucositis is here. All we can do is continue insisting on excellent oral hygiene, and feed him good nutritious food to aid digestion and promote healthy cell growth. I requested another prescription for leukemic mouthwash in case we have a painful weekend. I’m hoping we won’t need it.

Benjamin had another blood draw today, and his absolute neutrophil count (ANC) is 153. He’s still severely neutropenic, and his numbers aren’t rising yet. His next round of chemotherapy is scheduled to begin on Monday, but he has to reach an ANC of 750 for that to happen. It’s possible, but not likely. If we don’t make counts, we will likely be delayed at least a week.

I had always been of the mindset that a chemo delay was not ideal. We want to get this over with as quickly as possible, and we feel the need to stay aggressive in our treatment plan. But Dr. Moore didn’t frame it that way at all. Rather, he made me feel like the first half of the Consolidation Phase has done its job quite well, which is why Benjamin’s marrow is still so suppressed. His counts will come back up on their own, and that’s when we’ll know to begin treatment again. It makes good sense and it was a relief for me to hear, but it’s a hard concept to swallow. It’s against our intuition to think of a man-made medicine working in the body for so long after its consumption. I must remember it’s not just one medicine depressing Benji’s counts. It’s the entire Consolidation cocktail. It may have been two weeks since his last dose of Ara-C, but he’s had continual Erwinia (plus half a dose of PEG-asparaginase), Vincristine and Methotrexate since then. If he makes counts Monday, we’ll be thankful to be on schedule; but if he doesn’t, it will be easy to find gratitude for the break.

Saying that Benjamin is brave during his Erwinia shots is both redundant and an understatement. It is just how he rolls, really. It took the pharmacy longer than expected to get the medicine to the Infusion Center, and while we were waiting, we heard other children getting various injections and procedures. Granted, some were younger than Benji, but there was a lot of screaming and crying. We said a little prayer for those kiddos, and I said a silent prayer of thanks for my own. Just as he insisted on taking his own vitals today, and drawing his own blood, and flushing his port, he insisted on removing the cream and the dressing from his legs, and asking the nurses about each part of the needle and how it worked. He squeezed my hand, and watched the healing happen. As soon as it was over, he was demanding more dancing from the nurses, and jumping out of the chair to take laps around the floor with me.

We left the Infusion Center around lunchtime. Rather than going straight to the parking garage, we took a different route so we could pick up Benji’s mouthwash from the All Children’s pharmacy. We passed a part of the cafeteria where several of the doctors and nurses pick up lunch on the go. In February, Michael and I had seen Dr. Mularoni there. He gave us no sign of recognition, yet I’ll never forget his face. He was the ER doctor who admitted us on New Year’s Eve. He’s the one who took us on a walk, saying “It’s not good.” He dropped the L bomb. In contrast, today I saw a young mother I’d met when I attended a parent support group just days after Benji’s diagnosis. I don’t know her name, and she doesn’t know mine. She doesn’t speak English and had shared her story through a translator. When I saw her today, she instantly recognized me. We locked eyes and smiled warmly. I asked, “How’s your baby?” She answered me with her body, a shrug-nod-smile combo that I understood perfectly, and reciprocated. I wanted to hug her. I put all the love I could into my feeble parting wish. “Good luck.”

Banyan came home today with a bag full of gifts his classmates had given him, simply for being a great big brother. It made him feel so good. As I write this, the two of them are having a “slumber party” in Banyan’s top bunk. Spring Break is already in full swing over here. Our dear friends and neighbors opened their pool this afternoon, and invited the boys. Benji had been deaccessed for five hours. I checked my research, consulted with Michael, and texted my nurse friend. All confirmed that he was safe to jump in. Then I checked with him. “What does your body tell you?”