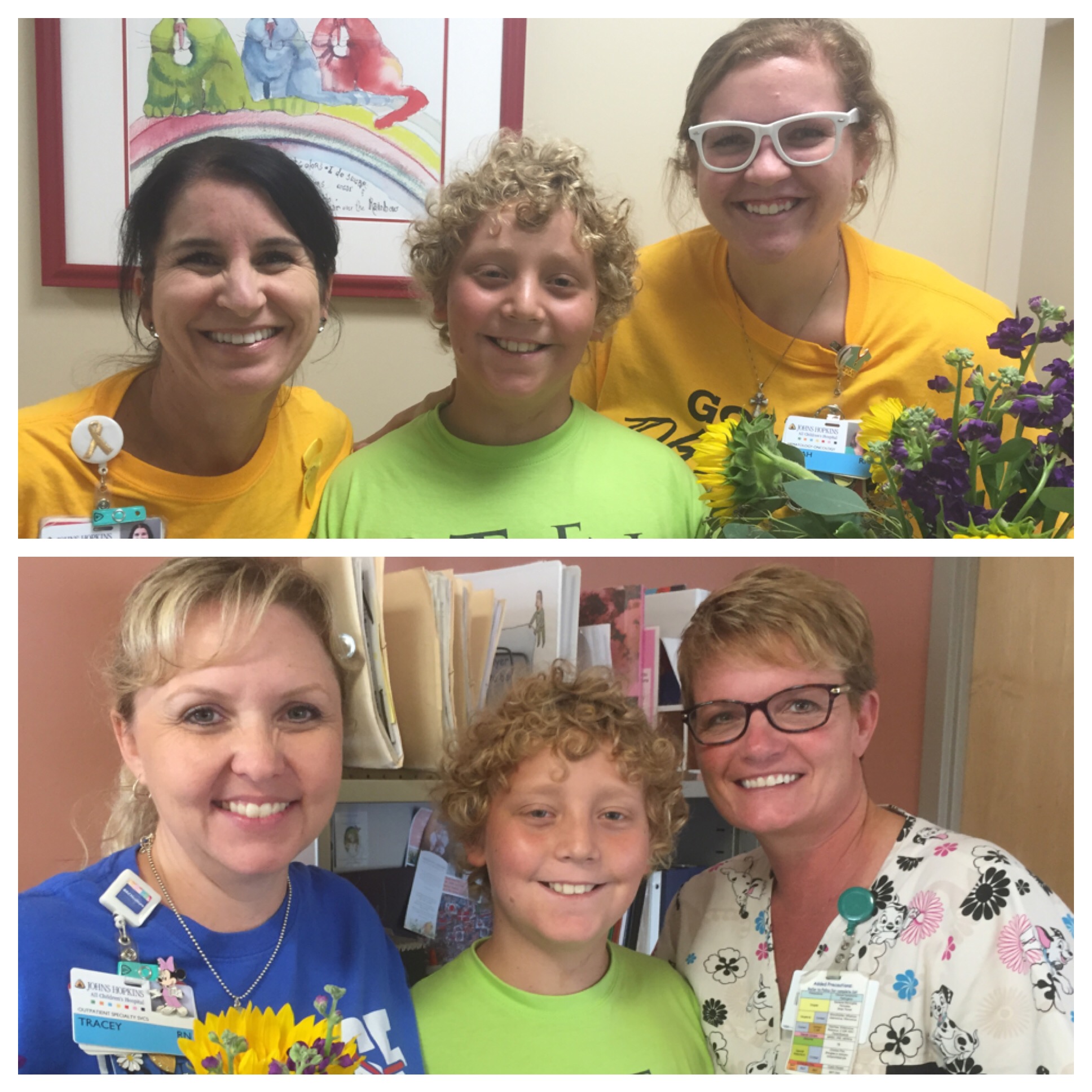 After we dropped Banyan off at the bus stop this morning, bagel in hand, Benji and I made a quick run for flowers. We stopped at the house to arrange them and tie on gold ribbons for Childhood Cancer Awareness Month. Three bunches, one each for the nurses on the seventh floor, the infusion center, and the outpatient oncology clinic, where our appointment was today.

In the waiting area we saw so many families we have met and now love. More than any other day before. It was a strangely happy reunion. Benji got called back for vitals, and the first face we saw in the clinic was Dr. Oshrine’s.  He wouldn’t be our attending physician today, but he’d sent an email yesterday saying he’d try to come see us, and go over the latest from Toronto.

The CMMRD expert in Toronto has apparently been quite helpful to Dr. Oshrine and his team, and also quite responsive. We now have not only surveillance guidelines, but stacks of consent forms which will begin the process of us collecting and shipping Benjamin’s blood, as well as mine and Michael’s, to Toronto. The physician there wants to perform a “functional assay of the protein affected.” This is encouraging to me; it means this practice knows enough to analyze beyond the genetic test. We will have better information and better guidance.

Once in the exam room we answered all of the typical questions, then our nurse gave Benji a quick finger poke to run his blood counts. As soon as she did, I knew his platelets hasn’t recovered enough to resume chemo. His finger bled, and bled, and bled. It finally stopped. While we waited for counts, we were seen by Isaac, a Physicians’ Assistant we haven’t seen since Benji’s last hospitalization nearly a year ago.

Isaac was so kind to Benji. He made him laugh. He answered lots of questions for me. He recommended twice daily Zantac for Benjamin’s tummy pain. He said there were no side effects and that it is extremely common for patients with extended steroid use to experience gastritis of one kind or another. As he was explaining varying levels of acidity in the stomach, I made a mental note to return a meal planning focus to alkaline foods.

Isaac was also very kind to me. He was so curious and complimentary about the process by which I’d researched and requested the genetic test. He kept telling Benji how lucky he was. I appreciated hearing that perspective. There’s truth to it. We are prepared, and if something should present itself, we will catch it as early as possible. That is a gift.

Benji’s counts came back, and his chemo was held a little while longer. His platelets needed to reach 50,000, and they’re at 44,000. We will return Monday. I don’t like chemo holds. But clearly Benjamin’s marrow needs to rest and recover from weeks and months of chemo strong enough for a grown man. He, of course, was thrilled to have a few more “days off.”

We left the clinic to deliver the rest of our flowers, to drop a lure module at the All Children’s PokeStop, and to send a fresh batch of rainbow stars to the seventh floor. We grabbed a quick lunch, then drove south back over the Skyway.

Lunch was on the same street as the bagel joint we went to immediately after learning that Benjamin had achieved remission. I thought about how ecstacically happy we were that day. I realized that the exact same set of circumstances are in place today as they were then. Benjamin had CMMRD then, and he does now. Benjamin’s leukemia was in remission then, and it is now. Our knowledge of either fact doesn’t change its truth, only our perspective. It was a comforting thought: the same level of happiness is just as possible today as it was that morning at the bagel shop.