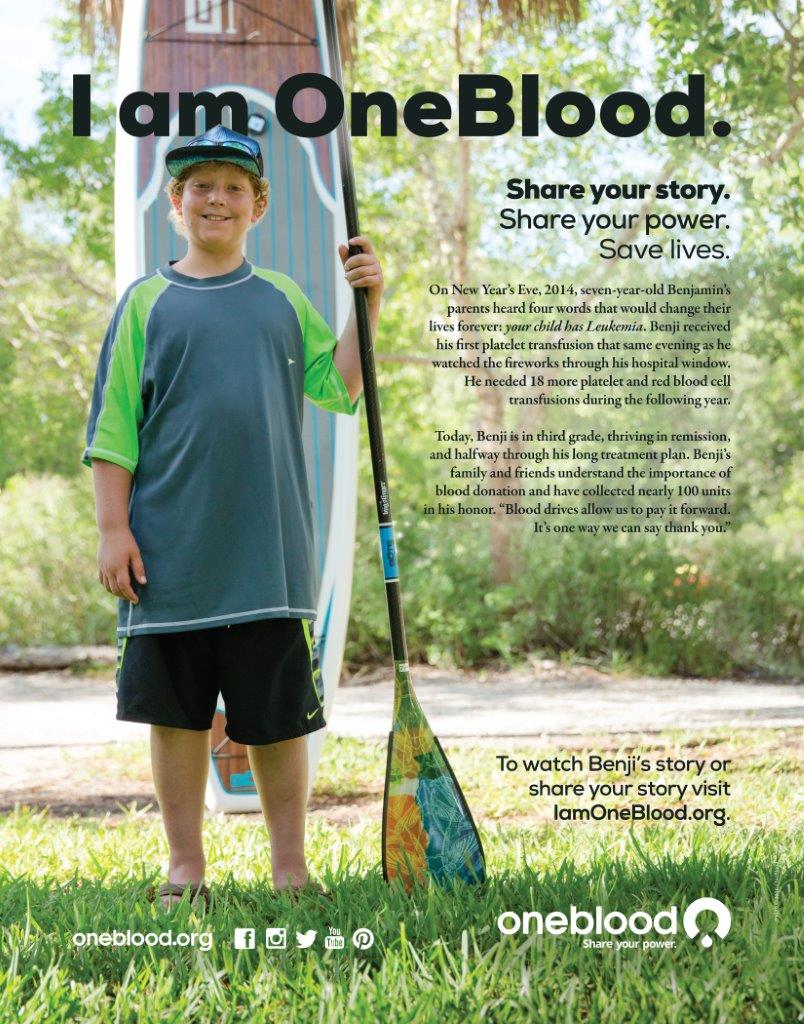 Benjamin’s fever remained low grade throughout the night. He slept well, but he was super tired this morning. So was Banyan. I think Banyan has successfully fought this virus, and was in the throes of doing so when he woke up. He never reached even a state of congestion, let alone fever, but he was weak and achy. I told him he could rest until Benjamin and I needed to leave for the hospital and then we’d see how he felt. That did the trick. An extra hour in bed and he was good to go, and only missed one period of school.

Even though today’s appointment was just for a conversation with the gastroenterologist, Benji expected nausea, and asked for Kytril. His tummy has been super sensitive through this virus anyway. I gave him the Kytril and we were on our way. He didn’t eat breakfast, and slept for most of the drive over the Skyway. When we pulled into the parking garage, I received the email from One Blood with Benjamin’s video and posters promoting blood donation for the month of September, Childhood Cancer Awareness Month. He’s making such a difference to so many people.

We waited for an hour and a half for the GI doctor to come in and meet us, and our appointment lasted no more than two minutes. He was very kind and spoke directly to Benjamin in funny, age appropriate language that made us both feel comfortable. The answer to the big question we had was a resounding yes–he can perform scopes while Benjamin is already under anesthesia for his lumbar punctures. He knew I was going to ask it, and was prepared. He said he’d talked to Dr. Oshrine and had gotten caught up to speed. I didn’t ask specifically if he was comfortable with the timeline of things (i.e. would he rather perform the scopes sooner?) because he was in and out so quickly I had little time to think. But I trust Dr. Oshrine’s leadership and direction. If either physician felt things should move more quickly, they would be moving more quickly. Benjamin’s comfort is paramount to me, so I’m pleased with this schedule.

Benji will get a colonoscopy and an endoscopy immediately before his lumbar puncture in late September. The surveillance timeline beyond these procedures will depend on their results. We are taking things one day at a time. I’ve thought of several questions since our wham-bam appointment, and I’m working on a list for Benji’s clinic visit tomorrow, which is where the questions should really be asked anyway. I know Dr. Moore will have more guidelines to share with me in the morning.

On the way home, Benji’s fever kicked up again. He slept all the way back over the bridge. Since we’ve been home, the thermometer has stayed in the 100.3-100.7 range. With tomorrow’s visit so close, I had decided not to call the clinic. Benjamin didn’t eat dinner. He took his medicine early and snuggled in for bed. Then I went in to take his temperature one last time, and it was 101.4. A second reading said 101.1. I had to call the clinic.

A physician’s assistant I know relatively well called back. She said what I thought she’d say but didn’t want to hear: protocol. So now Benji and I are here in the emergency room, watching Family Feud and waiting for a nurse to access his port. We are hoping for a clean blood culture and a high enough ANC that we can come home tonight. It’s been eleven months since we’ve been here. There were tears when we left, from all four of us, and big hugs. We hope to turn right around and sleep in our own beds, and make another trip tomorrow.