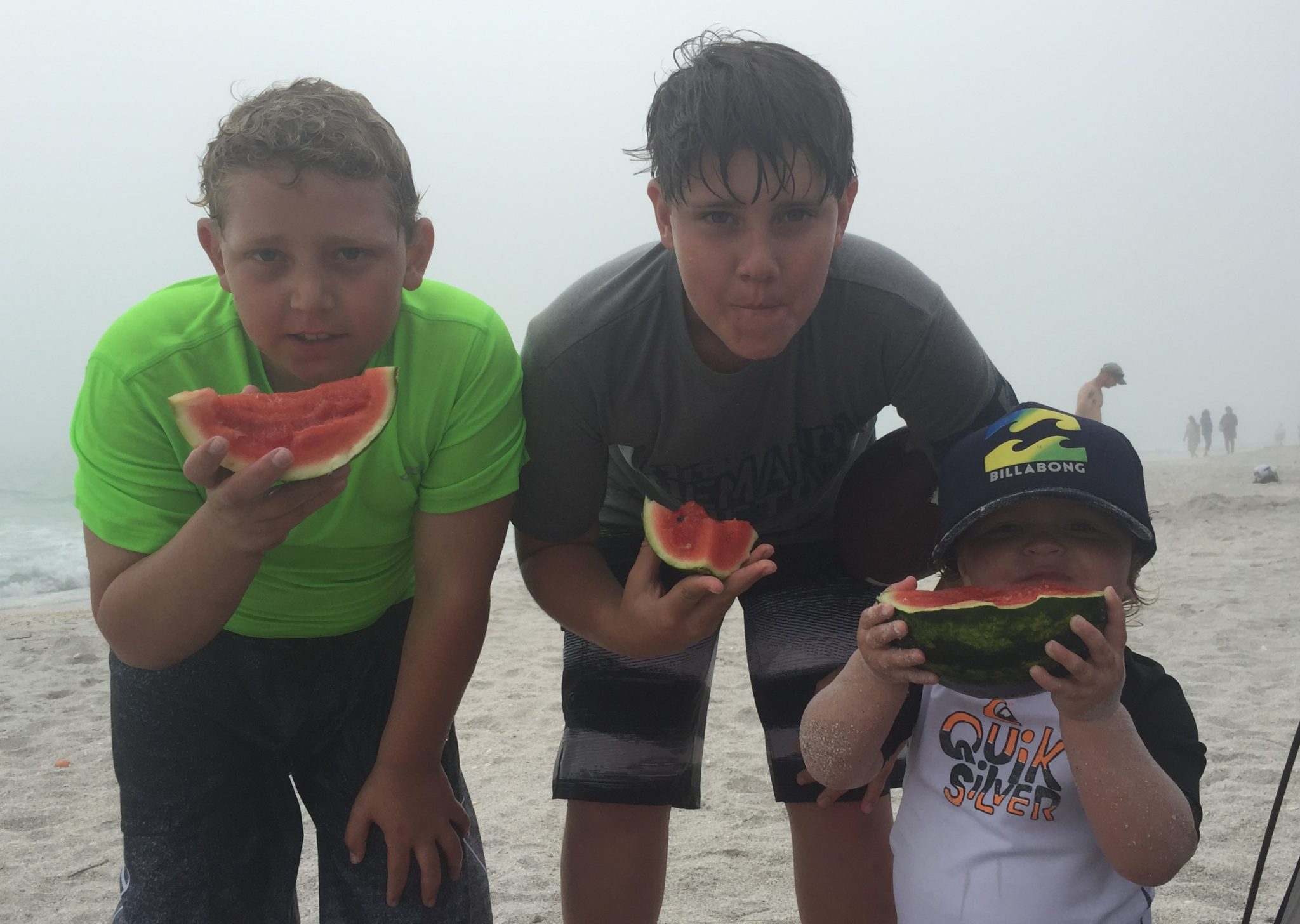 Today, one of my dearest friends came to town for a visit. We have been connected fiercely, regardless of time or geography, since college. It was so good to see her. Our children, of course, got along instantly. My boys were beside themselves trying to make her little one laugh.

We hit the beach in the afternoon, and Michael joined us there after work. I loved watching our boys play together in the sand, eating watermelon. It was a gorgeous day until the temperature dropped and it turned eerily foggy. We packed up and rode back to town in bumper to bumper traffic. My friend and I talked, and talked, and talked. I sometimes find it difficult to reconcile the person I am now with the person I was before. But I pushed those worries aside. With her, it doesn’t matter. We all cleaned up and went to dinner.

Benjamin is on day two of his monthly steroid pulse, and the effects of the medicine are already showing. He was hungrier than usual today, but tonight at dinner, we had a serious meltdown. Benji has extremely adept at managing his cravings and emotions during steroid weeks, with one exception–that narrow window of time at the table before the food arrives. It doesn’t matter if we’re at home or at a restaurant. Once he is seated, the wait time–whether it’s 20 seconds or 20 minutes–becomes unbearable. I suppose it’s because the rest of the day he is distracted from his hunger. At the table, it becomes his focus, and it consumes him. And the whole cycle makes him extremely emotional.

Tonight’s service was subpar, and Benji waited longer than he should have for his burger. When it arrived, it was clear that the burger had been sitting under a heat lamp for too long. The bun had absorbed much of the juice, rendering the sandwich structurally unsound when he brought it to his mouth. It would not stay together, and neither would Benjamin. It was too much. He’d waited too long, and now this.

I asked the waitress for a new bun, and took Benjamin to the bathroom for a conversation. I closed the door behind us and all I wanted to do was give him a hug. I knew that’s not what he wanted; he said some hurtful things, but I knew it wasn’t him speaking. I could feel his hurt over this. It wasn’t just the hunger; he was upset that it was controlling him.

We did some breathing and I reminded him that he is stronger than the medicine. After a few more moments, I opened the door to return to the table. Instead, Benjamin asked me if I would go play a game with him out front, where there were several set up for guests. I smiled. This was a beautiful tactic he was choosing to circumvent his hunger while he waited for the second burger bun. I was happy to play with him. For a moment, the guilty voice in my head threatened: Your friend came all this way to see you. Shouldn’t you be in the restaurant with her? I dismissed it immediately. When her toddler needed a diaper change, I didn’t question her absence for a second. Me playing this game with Benjamin was what he absolutely needed at the moment. It was a brave move, actually, and I wasn’t about to say no.

Soon, we were all back at the table, eating our meals and exhaling happily, everyone’s needs met. Benjamin was sitting to my right. Belly full, he put his arm around me, kissed my cheek, and said, “Thanks, mom.” I felt like a million bucks.