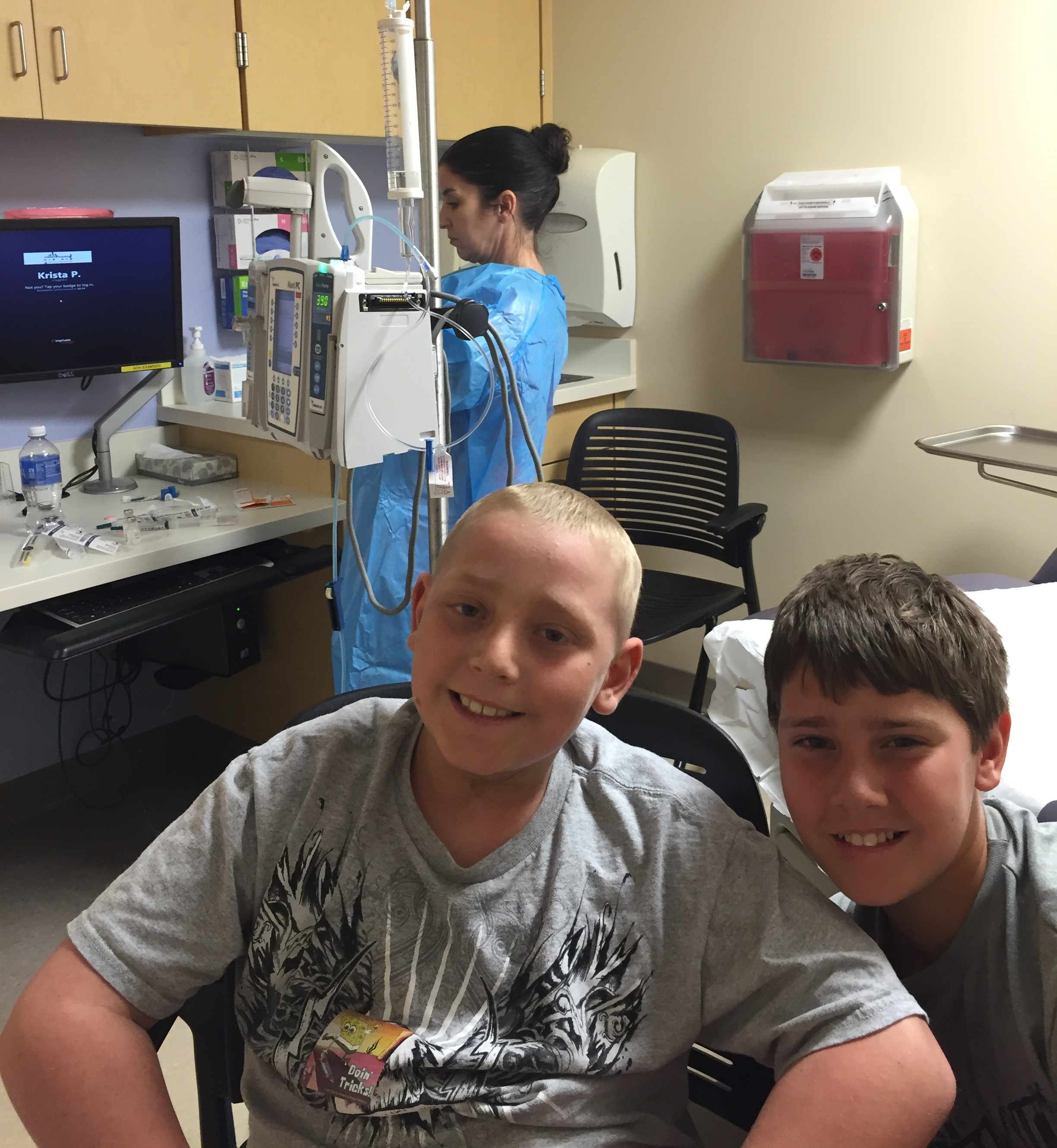 A bald eagle flew right in front of our car before we crossed the Sunshine Skyway this morning. He was close enough that I could see his eyes.

Michael woke us up with goodbye kisses as he left for work. Benji, Banyan and I collected our things (and my coffee) and loaded up to head north. Before we left, I put numbing cream on Benji’s port and covered it with a transparent dressing. I fumbled with the backing for a moment. We used to do this three or four times a week. It’s been a month, and for the first time, today it felt more abnormal than normal, more out of the ordinary than ordinary. Making this observation felt good. It is a good thing that this feels out of place.

The halls are decked at All Children’s Hospital. There are giant wreaths on the walls and the nurses are wearing Santa hats. We saw a giant polar bear riding an elevator. ‘Tis the season.

We waited an exceptionally long time to be called back to the Hematology/Oncology Clinic today. We used the time to hand out the golden glass ornaments Sarah gave us to give to the doctors, nurses, receptionists, medical technicians and custodians who have made an effort to treat Benjamin with kindness and compassion this year. We handed out two dozen of the gorgeous orbs, in the clinic, in the Infusion Center, in Special Procedures, and on 7 South. Everyone was so grateful. It was nice to say thank you. I was grateful that Banyan was with us to see just how many people have had a hand in Benjamin’s care this year.

Finally we were called back. Dr. Oshrine was the first one to walk through our exam room door. We were, as always, grateful to see him. Krista, our favorite clinic nurse, came in a few minutes later to access Benjamin and discuss medications. Benjamin stalled a little. Steadying himself for port access is a bit more difficult now that he has had so much (glorious) distance between visits. Dr. Oshrine stayed through the accessing and talked to us about the last month. I had precious little to report; a few tummy pains here and there, that one blood pressure spike and accompanying amlodipine, and Benjamin’s Friday finger injury. I told Dr. Oshrine I’d researched osteopenia and he agreed that an x-ray was a prudent move. He was curious to see what Benjamin’s bones looked like. After our visit with him, we went downstairs to x-ray the finger. The results came back quickly: no break, no fracture, just swollen tissue. Very healthy bones. A great sign.

By the time we came back upstairs, Benji’s bloodwork had come back. His hemoglobin, platelets, ANC and creatinine numbers were all perfectly where they need to be. He is neutropenic enough that his cell production is sufficiently suppressed, but not profoundly so. His liver enzymes are elevated, but no more so than expected. We were able to move forward with chemo. Krista came in to hook up Benji’s Vincristine. He used his oils and had zero reaction to the medicine, before, during, or after administration. We made our appointment for his next Vincristine and lumbar puncture in January, Benjamin was deaccessed, and we were free to go. We went to the pharmacy to pick up his next round of oral Methotrexate, 6MP and Prednisone. Benji took eleven little yellow pills as soon as we came home.

The drive home felt longer than it ever has before. I wasn’t present. I found myself thinking of other things that needed to be done, rather than living in the moment. I suppose the distance away has had an effect on me too.

Tomorrow is Benjamin’s eighth birthday. Kathy and Gana came over for dinner tonight to celebrate, and it was delicious. Benji opened many gifts and was as spicy as ever. One would never have guessed he’d had two kinds of chemotherapy already today. After our family left, we started Benji’s weekly detoxification routine: a juniper berry and rosemary bath, a castor oil pack, some milk thistle for his liver and essential oils on his feet. The boys have been playing and laughing all night. They are finally going to sleep. This will be the last time I tuck in a seven-year-old of my own. Tomorrow, he’ll be eight, and we will continue the mighty celebration.