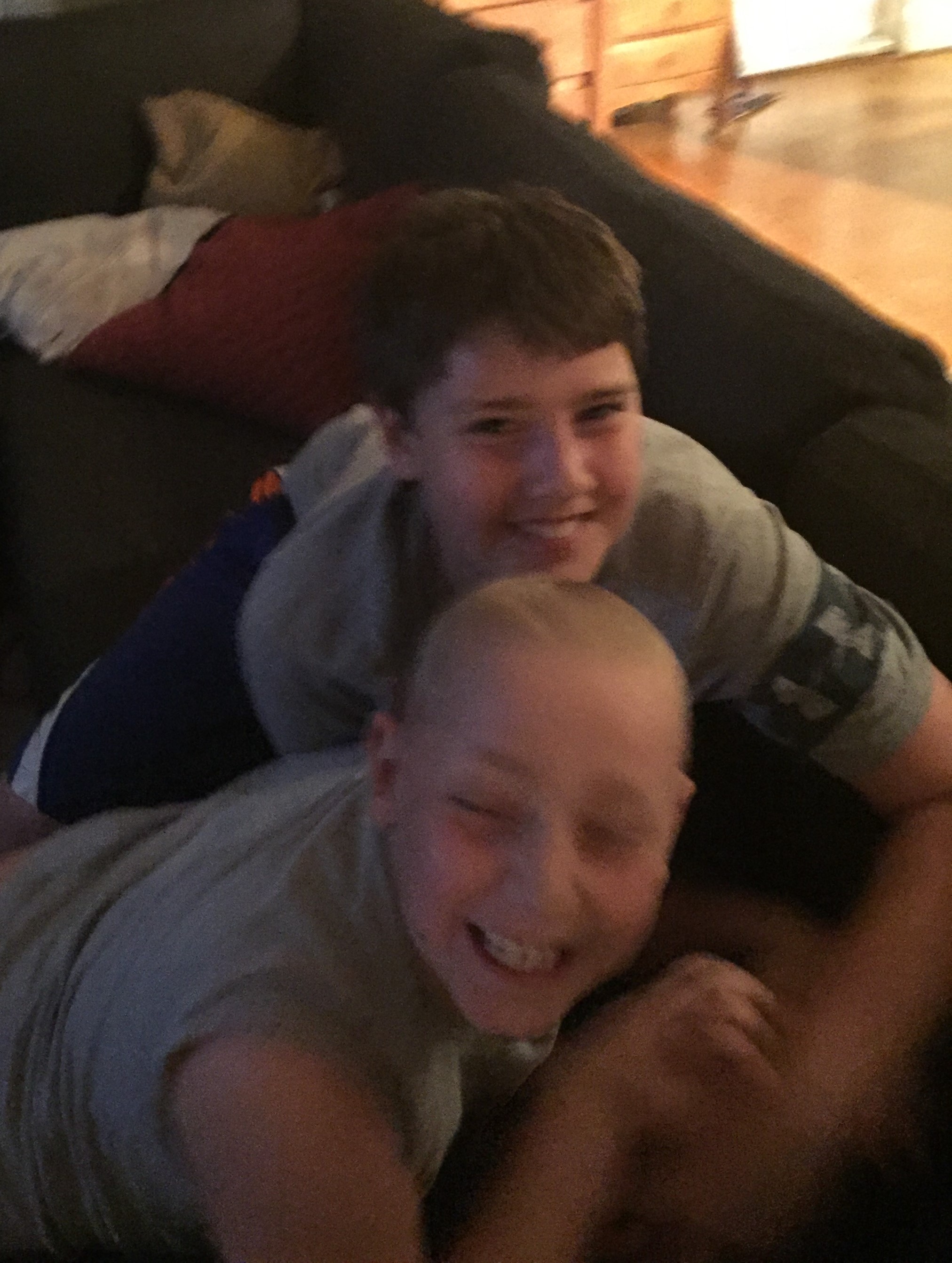 I got a good night’s sleep last night and a bridge walk in this morning. When I returned with the sunrise, Michael said that Benji had awoken with a tummy ache. It dissipated quickly. Thursdays seem to present themselves as “check in” days; I take a blood pressure reading, give milk thistle and glutamine, detox with anti-cancer essential oils. All systems looked great as Benji was getting ready for school. We all began our day.

While the boys were away, I got a ton of work done. I also received messages from two other mothers of children with leukemia. One of them sent a picture of a bruised port area, wondering what to do. The other had received the Healios we sent and was so grateful. She too sent a picture. I recognized the sores on her son’s lips. I get so fulfilled when I am able to be present for another mother. I can’t really explain it.

After a very productive work day, I picked up the boys from school. Benji’s school is first on the circuit, and we have quite a while in the car before we pick up Banyan. As we were talking about his day, he told me that a fire truck and an ambulance had been at the school today. He didn’t know why, and had mentioned it to a good friend of his. He told me that his friend told him that a girl was in the clinic who had cancer, and that she was about to die. Um, what?

I realized I was sweating. I felt dizzy. I gripped the steering wheel and even contemplated pulling over. But here’s the thing–Benji was completely fine. He didn’t seem upset in the slightest. Inside I was feeling so protective. Logically, I knew that this was just a childhood game of telephone, a simple case of mixed up facts. But maternally, I was thinking, how could anyone–even a second grader–say such a thing to my son? Watching Benji’s capability in handling this situation made me realize that this that was my reaction, not his. Benjamin, of course, handled himself beautifully. He even shared with his friend the story of Alex, the 8 year old girl after whom Alex’s Lemonade Stand was founded, who passed away. She had a different kind of cancer, he said. I thought of Hudson. He had a different kind of cancer too. After we’d resolved that Benji’s friend was misinformed, Benji’s eyes grew heavy. He was tired. For the first time in many days, he fell asleep for a little bit in the car. I stared at him at red lights. I certainly felt exhausted; I wondered if he carried things a little more heavily than he let on.

We grabbed Banyan and headed home for homework hour. Michael came home from work a little early; he has a big project to present tomorrow. I stand in awe of the genius I married, truly. He took a nap so that he can pull an all nighter tonight, and the boys and I made a nice dinner. Afterward, they watched Elf (again, for the hundredth time) and played roughly on the couch, laughing hysterically in whispers so as not to wake up their daddy.