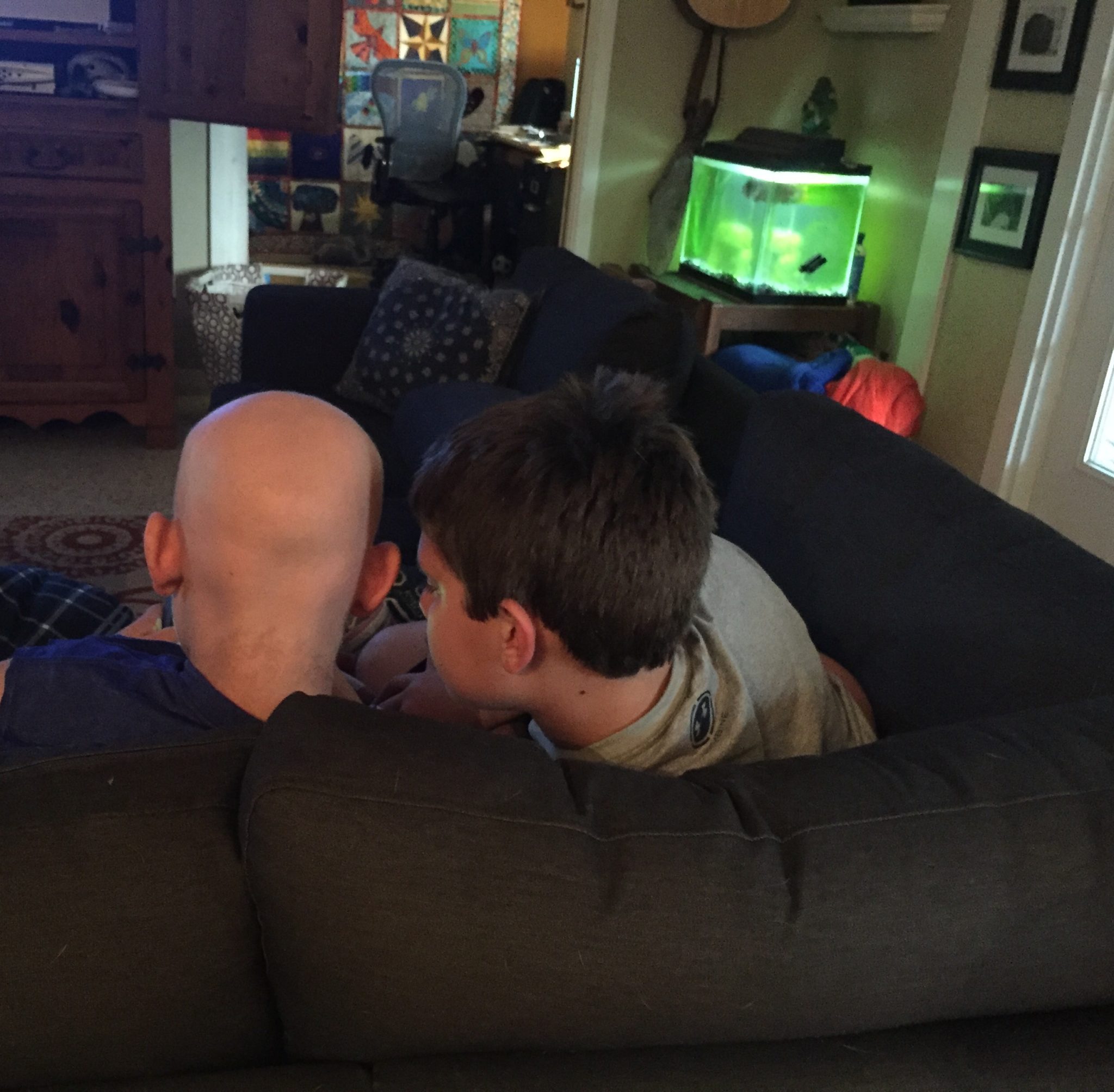 Benji’s sore throat yesterday evening manifested in the scariest of ways just after midnight. I woke up to an awful sound, and ran into the bathroom to find Benjamin gasping for air, trying to cough and cry and breathe all at once, tears rolling down his cheeks. Michael was right behind me. Benji was holding his throat to show us how badly it hurt, and he kept trying to tell us he couldn’t breathe. He was so scared and worked up that he eventually vomited. The action served him well. He could breathe easily again, which calmed him down, and we ran a hot bath immediately.

As Benji’s bathwater was running, I was running through the hospital checklist in my mind. I wasn’t sure yet what we were dealing with. We took the late night positions we’ve occupied so many times now, he in the bathtub and I on the floor, and I asked him questions. The only symptom he was experiencing was a dreadfully sore throat, and a cough that he was trying to prevent because it would hurt too badly. As he breathed, he wheezed. I racked my brain, landing on the Pentamidine he’d inhaled earlier in the day. I grabbed my phone and pulled up the moms’ group online, and asked if other kids had reacted to the antibiotic. There were plenty.

Benji got out of the tub, and I asked if he’d like some hot tea to soothe his throat. He nodded emphatically. I tucked him in with Michael and by the time I returned with the chamomile and manuka honey, he was asleep. The wheezing continued. It was disturbing, but it wasn’t impacting his ability to breathe or his resting heart rate. Again I pulled out my phone, this time to record the sound, in case I would have to play it for a doctor today. I grabbed the diffuser and put in a few drops of my respiratory blend and placed it next to our bed. Before I fell asleep, I emailed our contact with OneBlood–the one who facilitated Benjamin’s invitation to share his story on the news this morning–and told him there was a good possibility we’d have to cancel.

I confirmed the cancellation when we woke up a few hours later, and followed it with texts to Benjamin’s teacher and baseball coach. Benji’s throat was still very sore and he was congested. I was relieved to hear that the wheeze had disappeared and he was breathing effortlessly, but he clearly needed a day at home. We rested for a while, then greeted the day with some science fun, and research for a project he has due in a couple of weeks.

We struggled through a few behavioral issues today as Benji grasped for control in his ever changing world–and, if I’m honest, so did I.  As the day progressed, Benjamin felt better and better, and his mood (and mine) improved. He has not registered a fever. His symptoms seemed more cold-like now than reaction-like, though I really have no way of knowing. I will bring them up at our appointment on Tuesday and make sure he isn’t prescribed the inhaled version of the antibiotic again, just to be sure. I felt no need to call the clinic today, and I certainly was not going to drive up there for clarification. The last thing I wanted was a hospital admission and another mystery. Unlike the last time strange symptoms scared us, this time I knew that home was where Benji needed to be.

Benji was so happy to have Banyan home from school this afternoon, and Banyan was so sweet to his brother when they were reunited. He asked immediately how Benji was feeling, and said enthusiastically, “I’m surprised to see you in such good health after what happened last night! That’s great!” Of course the love fest didn’t last forever, but their gut instincts were right on. Benji wasn’t feeling well enough for baseball practice just yet, so we came home and enjoyed a relaxing evening together. If he feels up to it, he’ll practice in the morning, with the option to play in the penultimate game of the season.

I’m grateful that Benjamin seems to be recovering so rapidly from such a terrifying event. Tonight will be telling, but the diffuser is already going and I envision clear and peaceful airwaves bringing oxygen into his perfect body. My mother, sister, niece and nephew are all converging on Sarasota this weekend. Michael’s mother and sister will join the party tomorrow night as well, and we’ll have a house full of family. We all know how easily that could have been prevented.