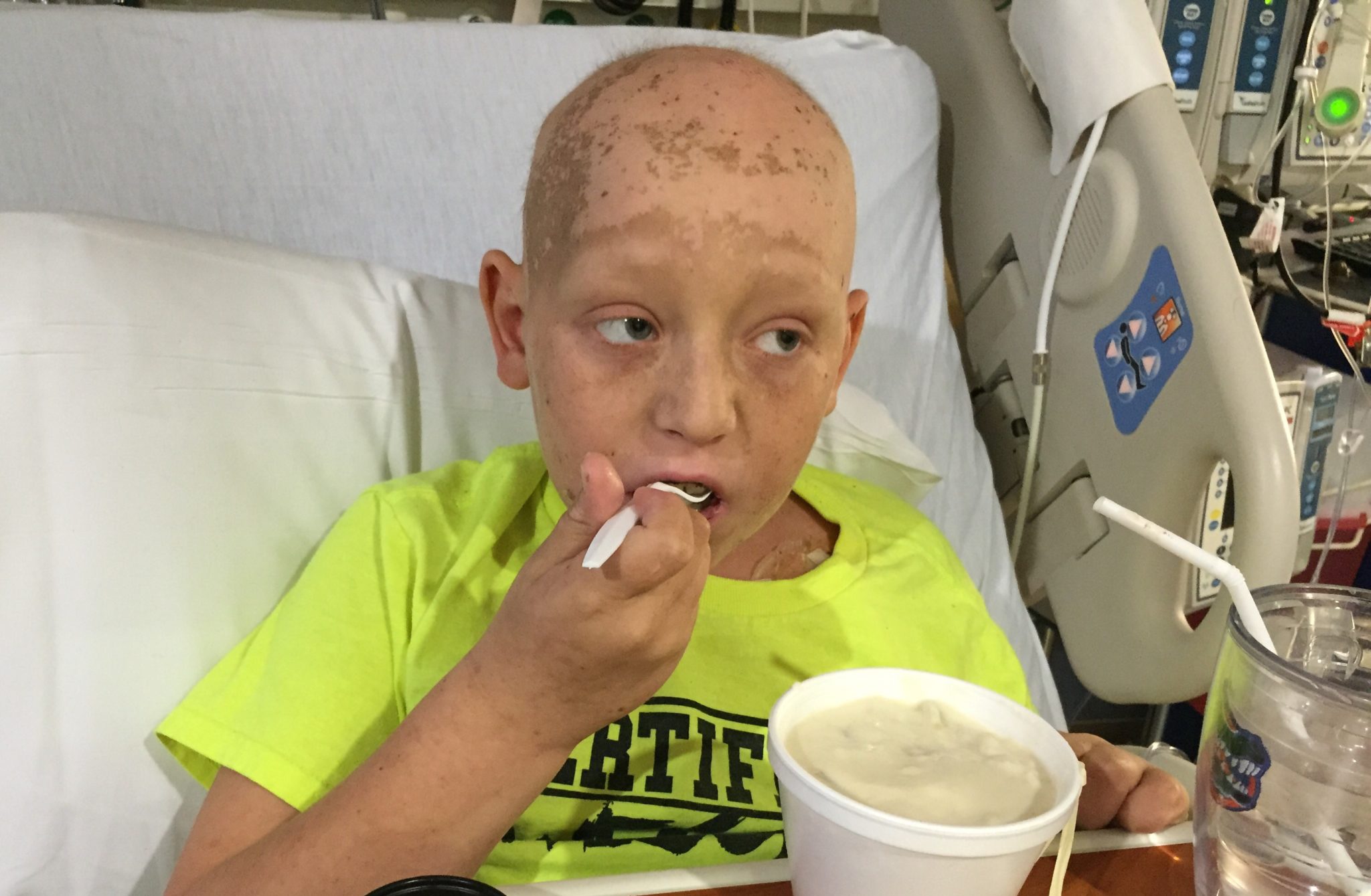 According to our night nurse, Benji “slept through the night.” That’s not quite accurate, but we definitely got more sleep than we have in many days. It was like a delicious sleep appetizer. I woke up wanting more. I walked groggily to the community kitchenette before sunrise to get Benji some ice, and another mom was approaching to get coffee. We wore the same exhausted expression. We looked at each other and we both nodded, as if to say, “I know. I understand.”

Benji had more trigger reactions this morning that were mentally precipitated, rather than physically. When he woke up, he said fearfully, “I hate that medicine!” and there was nothing new in his line. He asked to take a bath. When he got out of the tub, he vomited; it seemed directly related to the sight of the bags hanging from his IV pole.

During the nurses’ shift change, I learned that Benji’s morning blood numbers hadn’t come back from the lab. I heard the night nurse tell the day nurse that it was because they wanted the sample to be looked at by a pathologist. I fought a visceral fear. That word brings me back to New Year’s Eve. It was so tempting to calculate the number of days this setback has delayed Benjamin’s treatment and wonder what was under that microscope. But I composed myself, and simply asked why. The nurses told me that any time there is a large differential in numbers from one day to the next, the lab automatically sends the sample to pathology. They suspected that Benji’s Neupogen was the culprit; it boosted his bone marrow for a week, and was discontinued yesterday.

I learned more in morning rounds. Benji’s platelets had looked large under the microscope. Dr. Wishnew said this can happen when they are first produced in the marrow. His hemoglobin had jumped way up as well, and for this, there was no explanation. It could have been simple sample bias. Tomorrow’s draw will tell us more. I reminded myself that every single vial of Benji’s collected blood is tested for leukemia blasts. They aren’t there, of course. It’s not a fear based in logic.

More good news from rounds: Benji remains fever free, so his antibiotics have been discontinued. He isn’t pressing his pain button, so his medicine was reduced again today. And his creatinine is within his normal range, which means his kidneys have made a complete recovery from their methotrexate-induced injury. In the wild events that followed that injury, I don’t want to overlook the importance of this victory. Benji narrowly avoided dialysis, and permanent renal impairment was a possibility until just this week. I’m grateful for this complete healing.

After his bath, Benji watched a movie with his new headphones and followed it with a midmorning nap. I listened to music and busied my hands with knitting. When Benji woke, I called his physical therapist. He protested. He remembered the tears that came from walking the past two days. But when she arrived, he conjured up the bravery and attitude to do the work, and he did it beautifully, and without tears. He agreed to go for two walks tomorrow.

Benji seemed to have a new energy about him today, a revival of spirit that felt solid, not fleeting. We read several chapters of a new book. We pulled out some art supplies and he began creating on his own. The innovation was such a welcome sign. We put together two Lego spaceships, and he made jokes about the little dudes that were supposed to be the pilots. I realized I was smiling a lot.

Benji’s eyes hurt a little after the Lego construction, and he took a brief nap. Michael and Banyan were on their way to see us. When Benji woke up, he was in tears; I asked him if he was in pain, and he shook his head no. “I’m hungry!” he cried. My smile turned to laughter. Things just felt different today. I knew he would eat. I knew it would work. His mouth still hurts, but I knew it would not betray him this time.

Per Benji’s request, Michael brought clam chowder and California rolls. The sushi didn’t do it for him, but Benji ate an entire serving of Sarasota’s finest New England clam chowder, and asked for more. It was his first meal in three weeks.

Michael and Banyan also brought get well cards from home and from school. Benji read the words of his friends and classmates and for the second day in a row, he laughed out loud. When Michael and Banyan left, Benji settled into a deep, satisfied sleep. I am still smiling. We will be home soon.