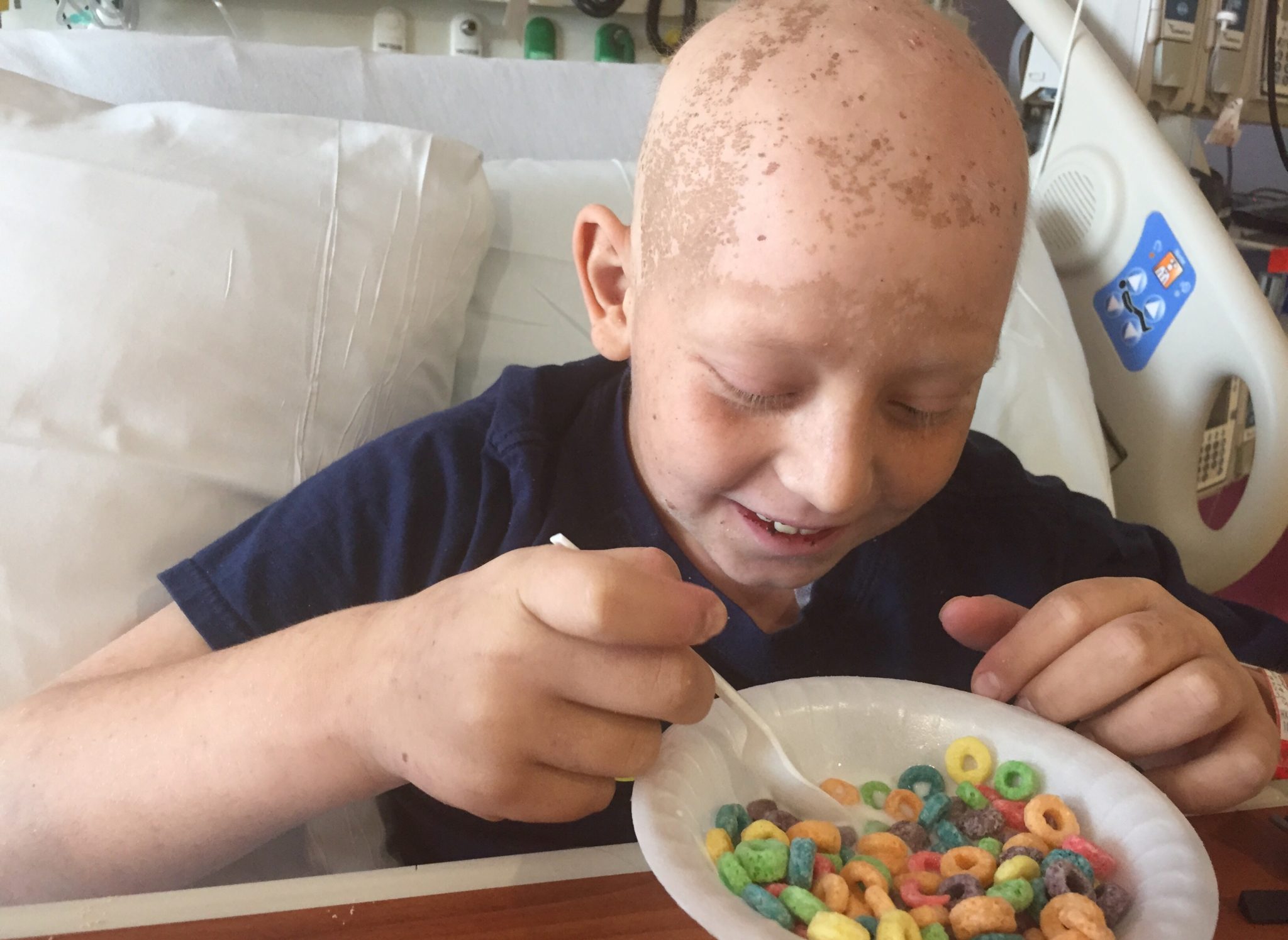 Benji took several more steps in the right direction today. His spirits were down when he woke; his lips were hurting, but mostly I think he was processing the idea of another day on the seventh floor. Fortunately, his funk was shortlived. He took a bath, then said he was hungry. I was happy to let him order something we never eat at home: a box of Fruit Loops. Breakfast of champions.

The morning rounds were predictable, which I like. With Benji now eating, his care team is comfortable decreasing the volume and rate of his Total Parenteral Nutrition (TPN). They also bumped him down to the lowest possible dose of PCA pain medicine, and are beginning to switch some of his supportive care medicines to oral, rather than intravenous. Benji’s creatinine continues to decrease. He is no longer on a “renal diet.” His platelets have increased and were not considered “large” today. His absolute neutrophil count (ANC) is through the roof. His hemoglobin dropped below the transfusion mark, confirming Dr. Wishnew’s theory that yesterday’s spike was a fluke, and setting the wheels in motion for two bags of packed red blood cells to be delivered to our room.

We built Legos and played cards and generally enjoyed the knowledge that Benji was feeling more like himself. He was making jokes and cracking up, just because it felt good to laugh. When it was time for his blood transfusion, he grew a little more somber. His tummy hurt. His body is getting used to digesting again, and through a very tender gastrointestinal tract. As badly as we want to go home, there are many reminders to be patient. Benji took a nap as the blood of a generous stranger flowed through his veins.

While Benji slept, I emailed Dr. Oshrine. He has been on vacation, and I wanted to make sure he was filled in on Benjamin’s progress this week. Most importantly, I told him I knew we would need to have a meeting soon to discuss Benji’s options for continuing treatment. Michael and I want to be sure that he is the oncologist of record at that meeting. We also have many thoughts to put together about this hospital admission once it is behind us.

When Benjamin woke up, it was time for physical therapy. Benjamin was teary and afraid it would hurt. I reminded him that he has bravely overcome many scarier obstacles, and without strengthening his muscles, we can’t leave. He pushed himself, and did more exercises by far than in either of his previous sessions.

Benji was excited when Michael was on his way, and he joined me on the couch to look out the window and watch for his daddy. Michael brought his boy more clam chowder, which was immediately devoured. Benji promised us a long lap this afternoon; with Michael here to make him feel strong, he walked all the way to the opposite end of the floor. We sat by the window overlooking Tropicana Field.

Benji’s throat hurt when we returned to our room. His nurse theorized that his new eating regimen was helping any final desquamation along, making way for new tissue. It will be tender for a while. Benji pushed his pain button and took a little rest.

Kathy, Gana and Banyan were here when Benji woke up. They brought a delicious dinner, and Benji ate a serving of cheesy pasta. While Kathy and Gana sat with Benji, I took a walk with Banyan, and Michael joined us. These last three weeks haven’t been easy for anyone. Banyan has had to navigate a heavy academic workload, and his management skills are being tested. I was grateful to walk with him. He needs to know we believe in him, but more importantly, he needs to believe in himself, despite his mistakes. Where it counts, he’s such a great kid.

After a nice visit and more card games with our family, Benji felt tired. His back hurt and he was ready for sleep. He is making such big progress every day. I feel confident this will be our last weekend up here on the seventh floor.