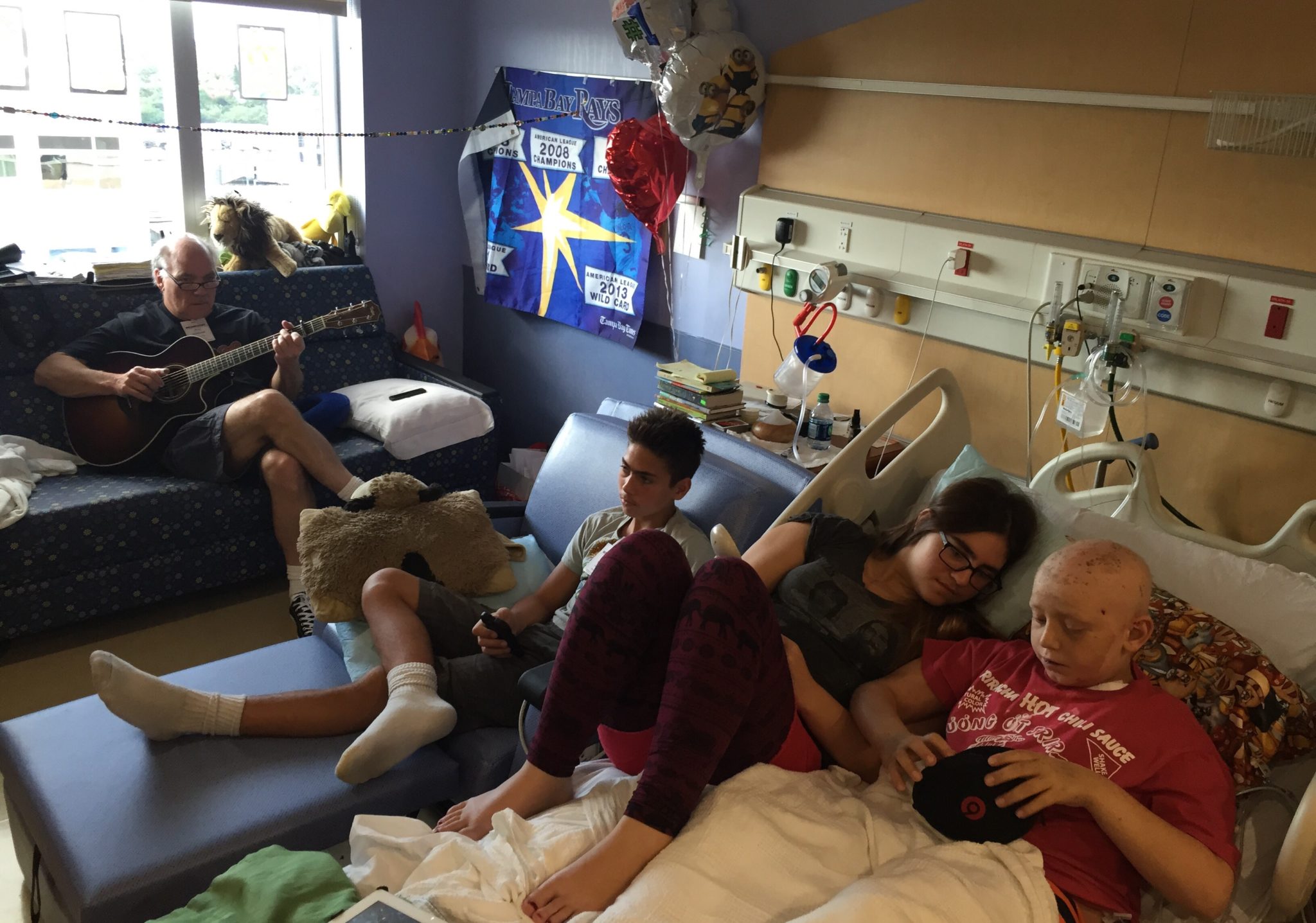 Benji’s lips hurt again last night, and he just couldn’t leave them alone. We didn’t get much sleep up here on the seventh floor. Sarah spent the night with us while her kids stayed with our dad (Paw Paw) in a hotel down the road. I was glad to have her here.

The morning rounds continue to bring good news. Benji’s absolute neutrophil count (ANC) has skyrocketed, so his Neupogen has been discontinued. If he remains fever-free throughout the night, his prophylactic antibiotic will be discontinued as well as his daily blood cultures. His blood pressure is stabilizing, so the extra dose of hypertension medicine suggested by the nephrologist is being put on hold. Benji’s hemoglobin and platelets are holding steady for today, and his creatinine has decreased to 0.68, which means his kidney function is almost within his normal range. He isn’t showing evidence of thrush or susceptibility to other fungal infections, so his antifungal medications were discontinued as well. Finally, his Patient Controlled Analgesic (PCA) was dialed down to give him an even smaller dose of pain medicine than the low dose he was on. The bags on his IV pole are dwindling.

Benji’s spirits were brightened when Paw Paw returned to our room with cousins in tow. When Lotus snuggled up in his bed, Benji said, “You make me feel happy.” We played games and listened to Paw Paw’s masterful guitar for a while, then encouraged Benji to move his body. Emboldened by his cousins’ presence, he tried again to take a lap around the seventh floor.

The tears came sooner today. They were rolling down his face. He said his belly hurt. I know how tender everything has been made by his mucositis, but his abdominal muscles also have not had much action in the past three weeks. It was a huge effort to walk to the end of the hallway and sit and watch the sailboats on the water.

On the way back to our room, I stopped and chatted with a mother I’ve known online for months now. Her daughter is now our seventh floor neighbor. We talked about many things, from favorite doctors to siblings to marriage to methods of detoxification. We compared the treatment paths of our children; her Sofia has had a bone marrow transplant and is undergoing antibody treatment for neuroblastoma. She’s a sweet and beautiful little girl who is now cancer-free.

Of course, I thought of Hudson, as I have every day since we’ve been here. I’ve wondered how differently things might have felt for Benji through this if I had told him about his friend. I’m very thankful for the wisdom that guided me to wait.

Benji was ready for a nap when he returned to his freshly made bed, and he slept for hours. Paw Paw kissed him goodbye before he headed back to Alabama. It was so sweet to have him with us. I know it gave him peace of mind to witness Benjamin healing.

After Benji woke up, he showed me that some of the tape around his port had come loose. We called his nurse and she brought in the supplies she’d need to change his dressing. His cousins wore masks while they sat with him through the procedure.

Benji’s sensitivity to triggers is growing. His nurse accidentally hung a predrawn flush after one of his medicines today. I didn’t catch it, and she pushed it quickly through at the end. Benji’s eyes grew wide as the taste hit his throat, and he vomited. She apologized profusely when she realized her mistake. Later, during shift change, Benji heard the nurses talking about the dosage of one of his medicines and he started to cry. When I asked him what was wrong, he looked fearfully at his IV pole. “Whatever they’re putting in me!” he said. Nothing was going in. And after Michael and Banyan arrived and we were playing cards, Benji’s night nurse came in to give him a tummy medicine he’s had dozens of times. The mere mention of it made him vomit again, before she’d even hung it on the pole.

I am hopeful that these sensitivities will start to normalize once Benji is able to eat again. I think we are close; he knows it is the last major hurdle he has to jump before we can go home. We know it may take a while, and we’ve told him not to rush. He’ll know when he’s ready. I am patient for the perfect timing of this big step. He just looks so small to me.

Banyan made Benji laugh tonight. A true, genuine, from the belly laugh. It was his first laugh in over three weeks. When Benji was a baby, sweet and new, no one could make him laugh harder than his big brother. Some things never change.