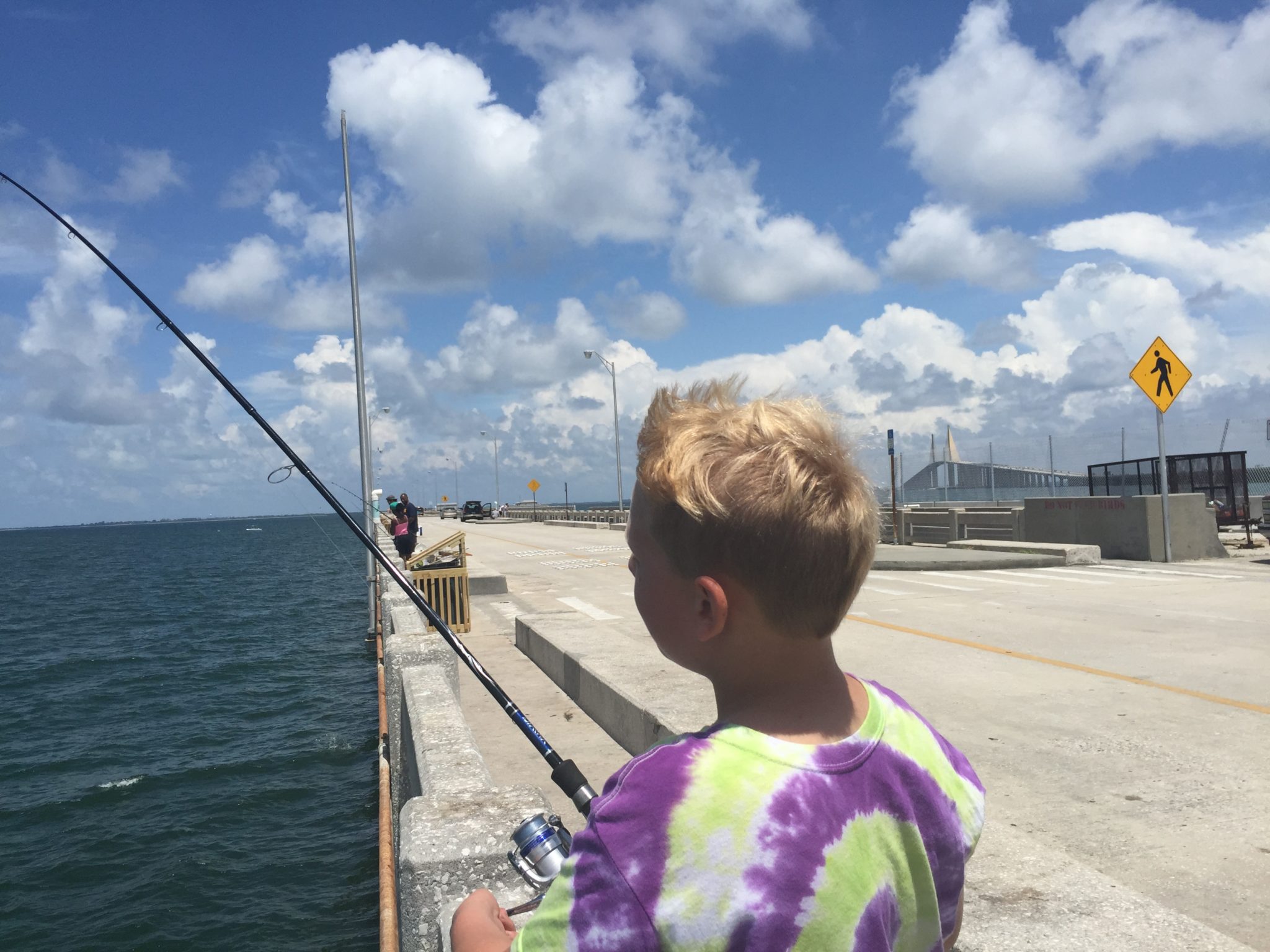 Benjamin experienced many feelings today, but one was constant: hunger. This Dexamethasone pulse is in full swing. He’s barely finished with one meal before asking for the next. This morning it was clear that a big breakfast was necessary to set him up for success. We enjoyed a Sunday spread on a Wednesday with Aunt Sarah and the kids, then headed north toward the Skyway. We left a little early so the boys could throw a few casts into the water at the Skyway Fishing Pier. No bites, but we were rewarded with a dolphin jumping below us, and a perfect view of the bridge.

Benjamin’s shots were ready almost immediately, but we waited a little while for them to be given. The Infusion Center was a busy place today, and every nurse seemed to have her hands full. Finally two of our favorite nurses walked toward us with the orange-capped syringes. One of them tried to rally Benji’s excitement, reminding him that these were his last shots for a few weeks. He knew this of course, but didn’t quite rally. His cousin Lotus said wisely that perhaps he’s saving the excitement for the very end of all of this. He knows there’s much more to come.

Benjamin did everything he has learned to do to overcome the fear and pain of the Erwinia shots. He squeezed my hand. He breathed deeply. He relaxed his legs. But when the medicine entered his muscle his eyes got wide. He said, still so calmly but with tears forming, that it hurt much worse this time. He looked disappointed. That’s not fair, his face seemed to say. The pain wasn’t going away as the nurses were fulfilling their bandaid art requests, so we began our laps and had a chance to talk.

I told Benjamin that he had done everything he could do, and the pain was not his fault. That maybe his body had just had enough of the Erwinia and truly needs the break he’s about to get. Aunt Sarah and Lotus found us on lap number two. By then Benji was feeling a little better, able to laugh with his cousin. When we came back to his bay, our nurse sat down with him and echoed my words, telling Benji how amazing he was, and that he had done everything right. I hope he really heard that. I don’t want him thinking for a second that today’s pain meant that he failed.

During the wait that followed, Benjamin was pleasantly distracted by his visitors. Lilye went to the cafeteria to fetch him a sandwich, Lotus helped him find Waldo with him, and we all played 20 questions. The time went quickly. Benjamin made good use of his oils when it was time for his port to be deaccessed, and soon he was free to go home.

We parted ways with our Gainesville family in the parking garage and headed south. Benji was in tears in the car. He didn’t feel well at all. He was asleep before we reached the Skyway, and slept all the way home. We had tentative dinner plans, but when we got home, he climbed from the car into bed for more rest. He didn’t want to go anywhere.

Benjamin woke up hungry, just before Michael came home from work. Daddy is an instant comfort. Benji ate dinner and we watched a movie, then he wanted to play outside with the neighbors. This was a good sign. I left him in Michael’s capable hands and went to walk the bridge and clear my head. When I came back, Benji’s spirits were fading. He took a detoxifying bath, got into his PJ’s, and we read our newest Roald Dahl–The Witches–together in our bed, with Michael and I on either side of our boy. It was an almost perfect snuggle. We were just missing one Banyan.

When I think about today’s experience in the context of Benjamin’s entire treatment regimen, it makes sense–today’s pain, yesterday’s color, his sudden fever that disappeared. We are in the middle of Delayed Intensification, but each half of this phase is like its own mini-phase, with totally different medicines and side effects. Benjamin’s body has been maxed out in one way or another at the end of each phase thus far. The cumulative effect of having twelve shots within a two week span, as well as all of his intravenous and oral medicines, is uncomfortable by design, intended to push his body to its limit. I’m so thankful for the recovery period we are about to experience. Aside from a quick finger poke next Monday, he won’t have a needle anywhere near him for a week and a half. He’ll have the rest he needs and all the healthy food he can eat. He’ll have birthday parties and boat rides and perfect casts. We’ll find saltwater soon and he’ll be carried by it. He’ll have summer.