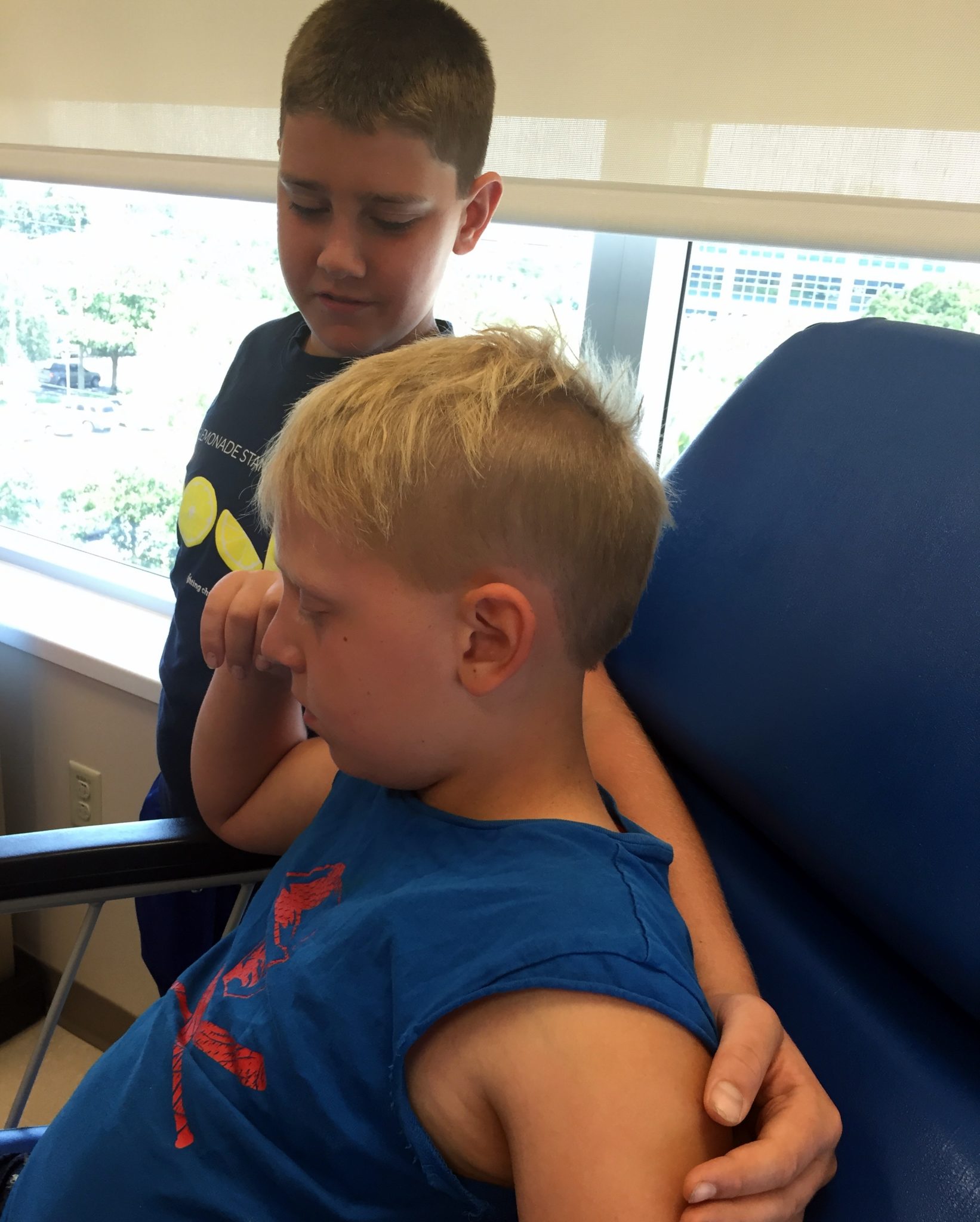 Today was Banyan’s last day in Sarasota for a month. Before Michael left for work, he woke Banyan up, and brought him into our bed. It was such a thoughtful gesture. Banyan was on my left side and Benjamin on my right, in the most perfectly fitting formation. We stayed that way in and out of sleep for at least another hour. I was conscious to imprint the feeling of their bodies on my skin, these children borne of me, who are outgrowing me at a rapid pace. These days are numbered. I give thanks for my awareness of their preciousness.

Benjamin was scheduled to get his first of several Erwinia shots during Delayed Intensification today. Banyan joined us on our trip over the bridge. I was so grateful for his company. He’ll be gone for four weeks, so I didn’t want to let his sweet face out of my sight for one minute–but it was more than that. He has never been to the Infusion Center, and never seen his little brother receive these giant shots with such grace and strength.

The shots took longer to prepare than usual. It was at least an hour before Benji’s port was accessed and his blood was drawn, and another hour and a half before the medicine was delivered from the pharmacy. His complete blood count came back with numbers so strong that I was inclined to question them–his absolute neutrophil count has jumped to over 3,000 in just a week. I scanned the other numbers to look for signs of infection, but his white blood cell production as a whole is within normal range. The nurses agreed I should be grateful for a strong immune system, for high numbers as a starting place before the second half of Delayed Intensification knocks them down.

I was careful to leave myself open to any outcome today. As the course of Benjamin’s treatment progresses, he is becoming more and more sensitive to the pokes and prods and flushes and injections he has to endure. We had a pep talk before the shots arrived. I spoke his language, talking of bravery and strength and of pushing through, watching him nod like a warrior going into battle, ready to take on yet another foe.

The nurses asked if we were ready, and the three of us walked into the only room with a closing door in the Infusion Center. Banyan stood nervously by Benjamin’s side, offering unsolicited words of comfort and a hand around his shoulder. I held Benji’s hand and waited for the squeeze. The shots came, the medicine coursed through his muscle. My tears and my pride were uncontrollable. It was Benjamin’s strength and pain in combination with Banyan’s kindness that undid me. These are just the finest men, these two. In spite of my faults and mistakes, they are growing up to be such deeply good humans.

After Benji’s shots, we took our necessary laps around the Infusion Center to get the Erwinia flowing. Banyan was sympathetic and proud, telling Benjamin that his own legs were hurting just watching him go through it. He offered to go get Benji a hot chocolate. I gave him the money, and when he returned, the nurses gave him a standing ovation. Big brother supreme.

We waited the necessary hour for monitoring in the Infusion Center before we were discharged. The nurses did their Friday dance with extra flair, and we were free to go. Benjamin felt really tender on the way to the car. His legs hurt, his tummy hurt, his everything hurt. He slept almost all the way home. Once we pulled into Sarasota he was excited again, ready to celebrate Banyan’s last night home. He’s going to miss his big brother so much.

We enjoyed a quick dinner at our favorite neighborhood restaurant, then came home for an early bedtime. Banyan and I have to leave at 4am tomorrow to catch our plane to Chicago. It will be hard to leave Benjamin for the weekend; really hard. But it’s my issue. Benjamin will be a thousand percent fine in the arms of his daddy. This weekend is another opportunity for me to give great thanks for our partnership.

May Banyan sleep soundly in his bed on his last night home for four weeks. May he realize how very much he will be missed, and how excited we are to let him go, to be himself, to experience his own adventure. My heart is full and breaking at the same time, this lump in my throat a permanent fixture.